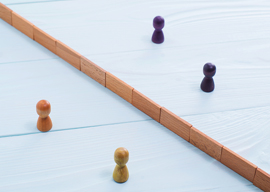 Evergreen State College is nestled far away from reality in the misty paradise of Olympia, Washington, a mossy and supernatural village which is run by lesbian elves and transgender circus performers. The school bears the dubious distinction of being “one of the least selective universities in the nation with an admittance rate of 98%.”

Over the past couple weeks, Evergreen has leapfrogged over Yale, Mizzou, and even Berkeley to become the most eagerly self-castrating school of higher learning in the US of A.

Reaching back to the 1970s, the school has hosted an annual “Day of Absence“ in which nonwhite students and faculty were encouraged to skip school and reflect elsewhere on how much it sucked to go to a racist school with racist teachers and racist students and racist buildings with racist libraries full of all that racist knowledge, even though their educations were likely almost entirely funded by racist white taxpayers. The annual holiday was supposed to underline what college life would be like without black people, which presumably would make white students feel bad about themselves and possibly even lead to mass self-sterilization in the hope of building a better future. (If you”ve ever wondered what a campus looks like without black people, this should give you an idea. At the risk of being honest, it doesn”t look all that bad.)

This year, due to caterwauling among Students of Color that they felt unsafe on the campus due to Donald Trump’s election”despite the statistical possibility that not a single teacher nor student on the entire campus voted for Trump or even dared to utter one public word in support of him”the Day of Absence’s organizers attempted to flip the script. Instead of the usual routine, which involved black students effectively playing hooky, white students were encouraged to stay off campus, where they could attend workshops that scrubbed their brains clean of any self-interest and instead filled their crania with wholesome and forward-looking feelings of self-loathing.

This rankled biology teacher Bret Weinstein, a self-proclaimed anti-racist Jewish progressive who at least has the clarity of thought to realize that Critical Race Theory is an ideology rather than an eternal truth. Back in March, he sent an email to Rashida Love, Director of First Peoples Multicultural Advising Services, which appears to be an actual job paid for with actual tax dollars by taxpayers who actually had no choice in the matter:

There is a huge difference between a group or coalition deciding to voluntarily absent themselves from a shared space in order to highlight their vital and under-appreciated roles (the theme of the Douglas Turner Ward play Day of Absence, as well as the recent Women’s Day walkout), and a group or coalition encouraging another group to go away. The first is a forceful call to consciousness which is, of course, crippling to the logic of oppression. The second is a show of force, and an act of oppression in and of itself….You may take this letter as a formal protest of this year’s structure, and you may assume I will be on campus on the Day of Absence. I would encourage others to put phenotype aside and reject this new formulation, whether they have “registered” for it already or not. On a college campus, one’s right to speak”or to be”must never be based on skin color.

As far as I can discern, Weinstein was bending over backwards straining to appear as anti-racist as possible. It didn”t matter. Students reacted as if he had burned a cross in front of their dormitories after hanging a runaway slave from a tree.

They mobbed him in a school hallway and engaged in the ancient scholastic dialectical tradition of calling him a racist who “said some racist shit” and a “useless…piece of shit” who needs to “get the fuck out of here.” Campus police were called in response to a perceived threat to Weinstein’s safety, but they were repelled by the chanting hordes of stupid brainwashed zombie-prog cultists. Weinstein says police subsequently told him it would be physically unsafe for him to return to campus since they had received strict stand-down orders from the school administration. On Thursday, he held his class in a nearby park.

But the student mobs were not content to merely cleanse Weinstein from their campus. Immediately after harassing him in the hallway, they spilled out across Evergreen State, barking, “Hey hey, ho ho, these racist teachers have got to go!” They held the faculty hostage as they screamed about racism and white people and white supremacy and slavery and oppression and a list of demands that needed to be met or they”d never stop screaming. It’s pure Maoist Cultural Revolution style mob insanity.

All because a Jewish teacher”who didn”t get a pass because he was phenotypically white to them, and they don”t discriminate”said maybe it’s a little bigoted to tell white people to stay away from school for a day.