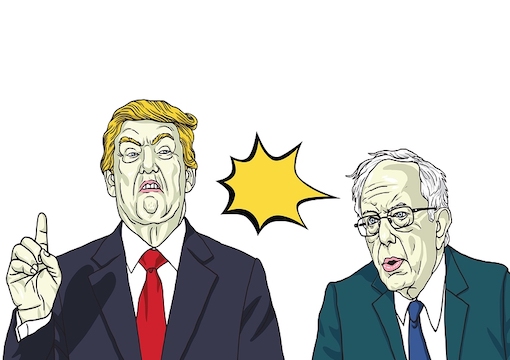 The Democrats’ sudden discovery of 77-year-old eminence grise Joe Biden has the electric feeling of Republicans settling on George H.W. Bush in 1992. (The Iowa Republican Party actually canceled the caucuses that year so as not to embarrass President Bush.)

It’s Democrats convincing themselves in 2004 that John Kerry was the “safe” choice.

This is good news for Trump. Bernie Sanders is his greatest nightmare.

What made both Trump and Sanders unique in their respective primaries was their voluble opposition to Wall Street, war and immigration. I’m beginning to suspect that Americans hate Wall Street, hate war and hate mass, low-wage immigration.

I take no position on these preferences. I am simply stating facts.

Recall that, in 2016, Trump and Sanders were the only presidential candidates opposed to the mass importation of low-wage workers immiserating our working class.

At this moment in time, 20 years into a war without end in Afghanistan — unless Trump really does end it in the fourth year of his presidency — with foreign policy experts constantly demanding military intervention against some faraway tribe, Sanders’ anti-war sentiments are a balm to the country’s weary soul.

Four years ago, Bernie probably beat Hillary Clinton — minus the finagling of the Democratic National Committee — by slogging her for her Iraq War vote.

Also, four years ago, Trump destroyed Jeb! Bush during a debate in the most pro-military state in the union, South Carolina, by calling the Iraq War a “big, fat mistake” and saying Jeb!’s brother had “lied” us into it.

The media heralded this as another Trump gaffe, “his riskiest departure from the party line,” as Fortune magazine put it. A week later, Trump swept the South Carolina primary, walking away with all 50 delegates.

Trump bragged so much about his opposition to the Iraq War that media “fact-checkers” worked overtime to prove that he was an Iraq War supporter. I think they were wrong and Trump was right, but the point is: Both Trump (the candidate) and the media knew that the anti-war position was wildly popular with voters.

Then Trump became president, and the only people working overtime on his war stance became his own voters, constantly on edge that he’s about to start a war with Syria or Iran.

Sanders has also shown remarkable consistency in his contempt for Wall Street. (There’s a reason poor Mike Bloomberg was running.)

To great acclaim, Sanders says things like, “The billionaire class is scared and they should be scared.” He vows to break up banks and impose a wealth tax. “We’re prepared to be their worst nightmare,” he says.

Similarly, back when he was running, Trump alone among Republicans kept harping about the absurd carried interest tax break that allows hedge fund managers (and private equity and venture capital managers) to pay a tax rate of 20 percent on their income, rather than the 39.6 percent the rest of us pay.

Trump complained endlessly about the loophole, saying, “the hedge fund guys are getting away with murder.” He said some of these people “are making a tremendous amount of money and paying virtually no tax, and I think it’s unfair.”

The sad ending to this story is that then Trump became president and hired half of Goldman Sachs. More Goldman Sachs employees work in the Trump administration than worked for Presidents Obama and Bush combined.

Gary Cohn, one of these patriotic, salt-of-the-earth Goldman guys, told Trump not to eliminate the carried interest loophole, so he didn’t.

And Warren Buffett continues to pay a lower tax rate than his secretary.

Maybe a Fidel-admiring revolutionary was never the best champion of even the most popular ideas — just as a vulgar reality TV star wasn’t. Maybe Bernie is dead. But the universal popularity of hating Wall Street, war and immigration will never die.

It could be that a “safe” choice is all the Democrats need. But I think Trump just dodged a bullet.