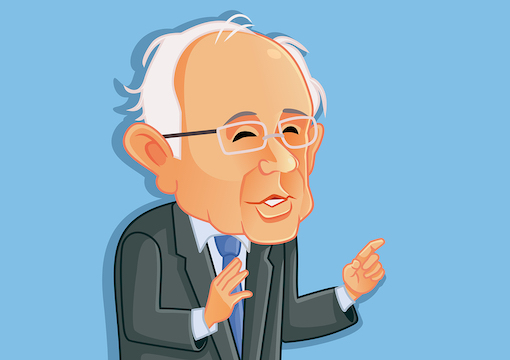 Dreams burned down for Bernie Sanders and his supporters this past week after Sanders’ initially promising start to the primaries. Young progressives who thought the Revolution was on were stunned to see Joe Biden regain momentum in South Carolina before he pummeled Bernie on Super Tuesday and its sequel on March 10.

One theory for why Bernie lost South Carolina and subsequent states was his inability to win over black voters. This is true. Biden did better than Sanders among black voters in every state on Super Tuesday, and won 58 percent of their total votes. (He even won a hilarious 96 percent of the over-60 black vote in Mississippi.)

Now, of course being the former vice president to Barack Obama helped Biden with black voters, to the surprise of no one. However, the autopsy of Sanders’ progressive campaign and its failure to win over black Americans is worth looking into.

As America becomes more Asian and Hispanic, it becomes less white. Everybody knows that this is part of what drives MAGA. But it also becomes less black. Fewer people recognize that this is part of what drives the Awokening. The sudden recrudesence of black radicalism and demands for reparation all reflect a desperate fourth-quarter drive to complete the unfinished business of black and white America before non-black, non-white America eclipses those concerns.

Black Americans are demanding as much as they can get from the country (power, reparations, a foothold in the cannabis business, etc.) before new management takes over and they are left holding the worthless IOUs from the soon-to-be-displaced white-American majority. Blacks are now second to Hispanics in being America’s biggest racial minority, and it is only a matter of time before political power begins to reflect this as well.

“A Democratic Party and America that is more Asian and Hispanic will be less black.”

Joe Biden represented the status quo of the Democratic Party; the guy that sees black Americans as the most cherished minority group and the ones to be lavishly feted. Black voters may have been right to feel nervous about the new progressive coalition that Bernie wielded.

The young Hispanic and Asian voters that Bernie Sanders did much better with are not going to be guilt-tripped into righting the historical wrongs done to blacks by whites (most of whom, in either case, are dead). Those injustices will be considered problems left over from a previous era, probably before their ancestors got here. (This is already playing out in Asian resentment over affirmative action at Harvard.)

Black Americans have reason to fear that the increasing Democratic coalition of Asians, Indians, and Hispanics will look at their pleas and say, “Your ancestors may have done the white man’s work for him, but you certainly did not do our work for us. We owe you nothing.”

Bernie’s radical progressives also fundamentally misunderstood black America when they tried to sell them on alienation, revolution, and repudiation of the American dream. Most black Americans feel at home in capitalist America and believe in the American dream—they just believe they were cheated out of it. That is an important distinction between traditional black America and the armchair revolutionaries in Bernie’s coalition. One wants their forty acres and a mule, while the other wants rich farmers dispossessed and killed.

John Steinbeck’s famous joke that “Socialism never took root in America because the poor see themselves not as an exploited proletariat but as temporarily embarrassed millionaires,” of course applies as much to black America’s proletariat as anyone. The older black Americans that Bernie lost are those born before 1970, or the generation that birthed one of the most popular cultural exports in American history—hip-hop, or rap. Hip-hop is traditionally the music of the enterprising poor who glamorize the opulent lifestyle of the rich. You don’t hate the rich in hip-hop. You hate that you aren’t one of them, and you rap about how that’s going to change one day. If you are rich you must shamelessly gloat about it.

The hip-hop worldview that sees life as a capitalistic struggle of all against all (hyper-competition and striving, scarce resources, life having extreme winners and losers, etc.) was a major influence on older generations of black Americans that survived life in the black underclass of the ’70s and ’80s. If you don’t believe me, listen to any gangsta rap album from the 1990s. They were always going to be skeptical of Bernie Sanders’ abstract collectivist fantasies that were short on details and hated the most successful.

Put simply: They would see Bernie as a player hater.

Sanders himself was aware that his lack of support among nonwhites was a problem in his 2016 campaign. Last year he went on the popular radio show The Breakfast Club and sheepishly admitted that his previous campaign was “too male” as well as “too white.” In other words, he apologized for having so many Bernie bros, and he promised that his future presidential cabinet would (wait for it…) “look like America.”

His brand of old-school socialism says that class, not race, is the foremost driver of exploitation and inequality. For the black and woke, that doctrine sounds suspiciously like he’s downplaying racism and the grievances of black America.

As Bernie Sanders’ famous supporter, the rapper Chuck D, once quipped, “Uncertainty is bulls—, as far as black people are concerned.”

That’s something Bernie Sanders is left to ponder, along with a phrase Barack Obama used to repeat: “If only everyone could be like the Scandinavians, this would all be easy.”

What Bernie found out on Super Tuesday was that the values and politics of “white Wakanda” Vermont don’t quite scale yet.