Between Thought and Action in Norway 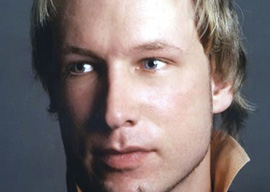 When I first read Ted Kaczynski’s Industrial Society and its Future, better known as The Unabomber Manifesto, I was impressed with how logically dispassionate it was, especially its devastating dissection of leftist masochism and hostility. Each paragraph—sequentially numbered as if they were biblical verses—built upon the previous one with mathematical precision, and I found myself nodding along with Kaczynski’s premise that technology was potentially the biggest threat to personal freedom in world history.

And then, walking placidly through all that ice-cold logic, I stubbed my toe on this line: “In order to get our message before the public with some chance of making a lasting impression, we’ve had to kill people.”

A Norwegian police officer who assisted in Friday’s arrest of Anders Behring Breivik described Breivik’s demeanor as “cold as ice,” an especially disquieting observation when one considers he was talking about a man who’d just claimed the Spree Killing World Record by piling up at least 76 bodies—eight via a fertilizer car bomb in downtown Oslo and 68 using automatic weapons at a Labour Party youth camp on Utøya Island.

“Breivik appeared to be exactly the sort of terrorist that every Europhobic, Christophobic, conservaphobic, whitemaleophobe had been praying to Goddess would come along.”

The downtown bombing preceded the island massacre by an hour or two. The New York Times, CBS News, and several other mainstream outlets initially reported that an Islamist group called “Helpers of Global Jihad” had claimed responsibility for the bombing. It wasn’t an entirely farfetched proposition, seeing as Norway has roughly 500 troops stationed in Afghanistan, a smattering of soldiers in Libya, and had also participated in the publishing of those infamous Muhammad cartoons a few years back. In 2004 and 2008, Ayman al-Zawahiri, al-Qaeda’s current leader, had publicly threatened Norway for its involvement in Afghanistan. And it’s not as if certain Scandinavian Muslims haven’t been acting a mite, shall we say, pushy and entitled of late.

Then, when reports began drifting in that the gunman on Utøya Island was a Norwegian national, the sort of press outlets who lectured us not to “jump to conclusions” during the Ft. Hood Massacre—and who always seemed careful never to describe Islamic terrorists as “brown-skinned and brown-eyed”—made a point of repeatedly noting the killer’s white skin, blond hair, and blue eyes.

When Breivik’s Internet postings and 1518-page manifesto went public, most of the press fairly exulted in describing him as a “right-wing Christian extremist,” which had me wondering when was the last time I heard anyone in America’s mainstream media describing anyone as “left-wing,” much less a “left-wing extremist.” Breivik appeared to be exactly the sort of terrorist that every Europhobic, Christophobic, conservaphobic, whitemaleophobe had been praying to Goddess would come along.

Breivik identifies himself as a conservative Christian, but the press didn’t make much mention of the fact that he also described himself as “anti-racist/pro-homosexual/pro-Israel” and that his writings repeatedly lumped Nazism in with Marxism and Islam as “hate ideologies.”

At last count, Breivik has killed at least thirty times as many people as Kaczynski did, and his manifesto—2083: A European Declaration of Independence—seems at least thirty times as long. The year 2083 is significant for Breivik because according to demographic calculations, it’s when Muslims are scheduled to exceed 50% of Europe’s population. Although 2083 includes several essays from other anti-Islamist writers—fully credited but presumably without permission—Breivik’s sprawling tome even plagiarizes and slightly alters a couple of Kaczynski’s paragraphs without crediting him.

But as with Kaczynski, I found myself agreeing with much of what Breivik had written.

And then you get to the parts where he says he has to kill people.

He condemns Nazism—saying he wished he had a time machine so he could go back to 1933 and kill Hitler himself—and the 10 to 20 million corpses it left in its wake. He also condemns Marxism and estimates it led to 100 million fatalities. He’s especially critical of Frankfurt School-styled “cultural Marxism” for opening Europe up to a mass influx of Muslims, adherents of a faith he accuses of murdering 300 million nonbelievers since its inception 1,400 years ago. Breivik claims that Western Europe only hosted 50,000 or so Muslims in the 1950s, whereas 25 million hyper-fertile Mohammedans currently call it home. In a creepily elaborate section of instructions for waging a New Crusade to purge Europe once and forever of Islam, he urges would-be Crusaders to focus their violence toward multiculturalist European “traitors” rather than the Muslims whose presence they sanction and encourage. Accordingly, his victims last Friday were overwhelmingly Nordic leftists rather than brown Islamists.