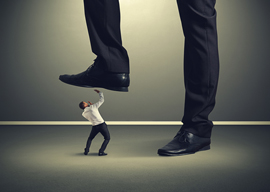 My direct relative fought with the loyalists during the American Revolution. He was a traitor to the cause of secession from the Crown. He fought for the British as a Lieutenant Colonel, with his regiment known as the Queen’s Loyal Rangers. His was the losing side, for better or worse; and I”m an heir to his genetic code.

So does this history of events make me predisposed to antidemocratic sentiment? I certainly hope so, especially given that democracy is, as Hoppe pointed out, “a soft variant of communism.” But as a new scientific study purports to identify the reason some people have a bias toward conservatism, I”m having second thoughts. Sometime in the future, my Tory disposition may prove to be a liability rather than an intellectual virtue.

A new paper by three political scientists at the University of Nebraska claims to have identified the psychological temperament of conservatives. The scientists”if college professors who teach courses on politics qualify as “scientists””call it a “negativity bias.” Chris Mooney of Mother Jones reports that the professors responsible for the paper used “a large body of evidence, including their own experiments using eye trackers and other devices to measure the involuntary responses of political partisans to different types of images.” Conservatives responded in a quicker manner when it came to “threatening and aversive stimuli.”

“Progressivism seeks to crush human nature and the idea that man isn”t meant for greatness. A progressive’s reflection never shows humility, only a hubristic belief in fixing all the world’s wrongs.”

Mooney concludes that conservative ideology seems “well tailored for an underlying, threat-oriented biology.” He paints a conservative caricature of irrational fear of change. That inference is too clever by half. Traditional conservatism, or what’s better called Toryism, is not about hiding from the scary outside world. It’s a worldview that, as A. J. P. Taylor described it, “rests on doubt in human nature; it distrusts improvement, clings to traditional institutions, prefers the past to the future.” Conservatism isn”t defined by gun-nuttery or rabid fundamentalism. It’s about prudence in the face of progressive utopianism and revolutionary fervor. When the conservative looks into the mirror, he sees a broken, fallible man capable of good, but never perfect, things. Liberals and government apparatchiks in the media don”t see him that way. Progressivism seeks to crush human nature and the idea that man isn”t meant for greatness. A progressive’s reflection never shows humility, only a hubristic belief in fixing all the world’s wrongs. For the left, right-wingers, including social conservatives, are ignorant troglodytes in need of forced enlightenment.

What’s disconcerting about this new study is not its possible uses in interpreting election outcomes or polling data. My main concern is with its use in thought-policing the public. If there is a “conservative gene” that can be identified in individuals, the happy regulators of the state may devise a method to rid society of these heretics.

Crusades against the undesirables have happened plenty of times before, most notably in the twentieth century. The biggest progressive cause at the turn of the Gilded Age was the practice of eugenics. Championed by presidents such as Woodrow Wilson and Teddy Roosevelt, the deliberate killing off of unfit races was not seen as a fringe campaign but a grand, utilitarian cause in the highest echelons of academia. In the 1920s, Harvard University was home to the nation’s leading intellectuals advocating for genetic reformation. The crusade to engineer a better, more adept race reached a point where teenage boys in a Massachusetts were castrated in the name of “segregation, selective breeding and immigration restrictions.” The boys were chosen because they were seen as socially “defective.”

The drive for the perfectly acceptable human only accelerated as the century wore on. Adolf Hitler”if you”ll excuse my acceleration of Godwin’s Law”made a point of eliminating gypsies, homosexuals, and the disabled for being “undesirable” in the new Nazi state. Stalin’s Great Purge saw the imprisonment and execution of various intellectuals and writers who defied the communist plan of violent, proletarian revolution. Pol Pot and the Communist Khmer Rouge regime deliberately slaughtered those of Chinese and Vietnamese ethnicity to racially purify Cambodia.

Genocidal purges in the name of libertÃ©, Ã©galitÃ©, fraternitÃ© are the calling card of progressivism taken to its logical conclusion. If there is such a thing as human perfection, and the only thing sitting in its way is a band of reactionary curmudgeons, then it makes sense to steamroll dissent in the name of the greater good. All that’s needed to justify the eradication is a bit of scientific evidence. If the gods of scientism sign off on purification, then little stands in the way of “freedom” from imperfection.