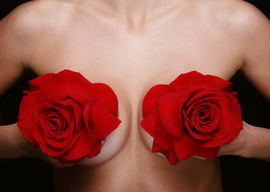 Women say they are sick of the impossibly high beauty standards men ruthlessly impose upon them. They are tired of having to spend hours at the gym and weeks recovering from surgery just to please men. The American Body Police now audit every increment of a lady’s BMI.

And the victims of this patriarchy-imposed demand for flawlessness are getting younger. When I was 18, it was completely unheard of for girls to get plastic surgery. In 2008, “219,000 cosmetic procedures were done on patients aged 18 and younger.” Even seven-year-olds are considering it.

But finally, the women are trying to fight back. A photo of a normal-sized female mannequin, deemed exceptional because it is normal, is exploding all over the Internet. As of today, about 200,000 people have “Liked” it on Facebook, and thousands of women have left empowering comments such as, “It’s about time!” and “Finally!”

“Here in the real world, love is blind. So are erections.”

But ultimately, they”re fighting a losing battle. Men will always hold the carrot of perfection at the end of a long stick of suffering simply because they can. What a vile bunch we are.

(Record scratch) Wait a minute! Nobody consulted me about all this.

Here in the real world, love is blind. So are erections. We don”t really care what you look like as long as you have a vagina and don”t dry-heave when you see us naked. If women knew how unbelievably perverted we are, they wouldn”t even brush their hair. Napoleon said to Josephine, “I will return to Paris tomorrow evening. Don’t wash.” We want to inhale your flaws. As my buddy Sharky said, “Smelling a woman’s ass is a poor man’s Viagra.” Our testosterone is already airbrushing you into perfection the second you walk into the room. We have virtually no deal-breakers.