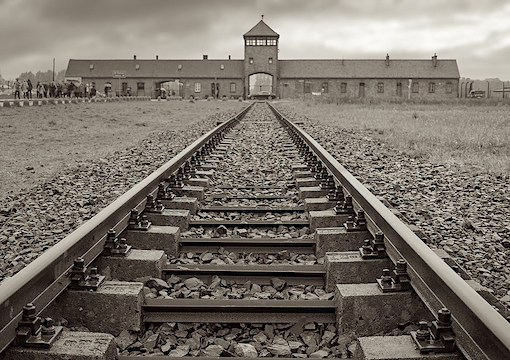 “Why is Hitler remembered as the worst villain ever, when other dictators racked up higher body counts?” Man, if I had a dollar for every time I’ve been asked that question, I’d have 6 million bucks (though that number might decrease during a later recount). It’s a decent enough question, though. Stalin killed way more than Hitler, as did Mao. Yet it’s Hitler who’s most remembered as the “worst of the worst.” Why?

The textbook Simon Wiesenthal Center answer is “Oy, the gess chembers! Shtalin didn’t use gess chembers.” In other words, Hitler’s scarier because he “modernized” and “industrialized” mass killing. Booga-booga!

The textbook far-right answer is that we Jews, who run things and all, vengefully elevate Hitler to super-devil status because he picked on us. So we damn him and his memory for all eternity.

There’s truth to both answers. Regarding gas chambers, yes, the human mind is more likely to be captivated by an assembly-line sci-fi murder contraption than by a gulag where people die of starvation, exposure, and bullets. “Official” Holocaust historiography tends to play up the elements that excite the imagination.

And yes, Hitler made a grievous error in picking on the world’s greatest storytellers. We’re not the Tutsi; you fuck with us, we’re gonna make movies and books and university courses and museums and monuments about it for the rest of time.

In the year 2525,
If man is still alive,
You can bet your ass he’ll know about Auschwitz.

All the same, I’d like to propose a different possibility regarding Hitler’s enduring image of ultimate villainy. In his book about Hitler’s final days, German historian Joachim Fest offered an astute observation regarding Hitler’s approach to empire building, and how it differed from the modus operandi of previous “conquering world powers”:

What makes Hitler a phenomenon unlike any other in history is that his goals included absolutely no civilizing ideas. Despite their obvious differences, conquering world powers—ancient Rome, the Holy Roman Empire of the German Nation, Napoleon’s France, and the British Empire—have all held out some promise to humanity, no matter how vaguely defined, relating to peace, progress, or freedom. In this way they received a certain exoneration from history, and in the end were often acquitted of charges that greed and thirst for glory were the major motives in their attempts to subjugate other peoples. Hitler, on the other hand, as he conquered territory and extended his control, rejected all idealistic trimmings, deeming them unnecessary to disguise his claim to power.

Fest errs on one point: Hitler was idealistic, and he did act in the name of “progress and freedom.” It’s just that his vision of “progress and freedom” wasn’t intended for everyone. Hitler acted solely on behalf of his racial kin, the “good blood of our kind” (gutem Blut unserer Art). All others within Nazi domain be damned; Hitler’s actions were for the exclusive benefit of his people. So yes, for those who were not “members”—Slavs, Jews, and all the “alien races” of Europe—there was no “path to progress and freedom.” Hitler didn’t couch his conquests in the name of “We’re helping the subjugated populations better themselves,” à la the British Empire, which always made a huge deal about how its conquests improved the lives of the bleedin’ nigs, nogs, ’n’ wogs.

“It’s impressive how rapidly Black Lives Matter has worn out its welcome with whites.”

Hitler wasn’t interested in conversion, like religious despots, or “reeducation,” like communist ones. If you weren’t of the volk, you had to go, whether by expulsion, resettlement, murder, or—as he intended for the Slavs—a slow but steady phasing out. Hitler wasn’t offering anyone a chance to “join the team.” You were either on the team by birth, or you weren’t.

Hitler’s approach rejected sentimentality. No poet laureate of the Nazi empire would’ve ever written, “You’re a better man than I am, Shlomo Dinsky.”

Whether consciously understood or not, this is a major reason Hitler is “scarier” than other, more prolifically murderous dictators. Psychologically, the notion of having no way to bargain, confess, convert, buy, ally, or fake your way to safety elicits feelings of primal terror. As frightening as it is to be confronted by an oppressive army that commands, “Join us or die,” it’s much, much worse to be confronted by one that removes the multiple choices, leaving only the latter option.

Which brings us to BLM.

It’s impressive how rapidly Black Lives Matter has worn out its welcome with whites. I say impressive, because it takes skill to burn up so much goodwill so quickly. Among whites, support for BLM rose dramatically in the immediate aftermath of the passing of St. George (Floyd). But as of today, support for BLM is at a lower level than it was pre-Floyd. In the space of three months, BLM received a huge bump of support only to level out and sink lower, ending the summer worse off with whites than in the period before the Floyd bump.

In Wisconsin, support for BLM has plummeted significantly among whites. Tutankhamun “Coach” Assad is a black activist in Madison, and if your first thought upon reading his name was “This guy’s probably a few bulbs short of a traffic light,” you’d be quite correct. King Tut told the local media that he blames the drop in support for BLM on the fact that “black culture has not been taken seriously” by whites.

I bet his response was even dumber than you expected.

The truth is, American whites obsessively try to take “black culture,” and black concerns, seriously. Whites have been conditioned from birth to say, “Racism is the worstest thing ever,” and they’ve been equally conditioned to strive for an America in which everyone communally overcomes racism and hatred because American dream bright future best days lie ahead (and any other clichés you want to add).

Most white folks who support the “fight against racism” do so based on the belief, and the assumption, that the endgame—the goal—is fellowship. “We all rise together.” Help one to help all. This is how whites get suckered into these schemes, and why they initially threw so much support behind an organization many of us had pegged as a violent terrorist cult since its inception. It’s not just paternalism (“Oh, those poor black dears! Let’s help them breathe!”); it’s also the belief that there’s a place for whites in the “civil rights” struggle. That it’s a mutually beneficial endeavor.

When the BLM riots began after St. George’s martyrdom, many whites likely assumed that the old rules still applied, that whites were welcome as long as they were willing to prostrate themselves. “Sure, the blacks are angry, and sure they’re angry at me as a white person. But by gum, they’re just trying to help me better myself! Yes, my silence was violence! I’m the real villain here. I’ll fess up, promise to improve, and we’ll lock arms like olden times and march like brothers.”

But soon enough BLM showed its true coloreds. It eschewed any desire to approach the topic of police violence from a colorblind perspective. If “police reform” were truly the goal, then the numerous stories of whites who’ve been the victims of bad arrests and unjustified shootings would have a place in the discussion, if only to demonstrate that the “fight” is for everyone’s benefit. But BLM is an expressly antiwhite organization, a hate group in the truest, purest sense. We see that hatred in every move BLM makes, from targeting white residential neighborhoods to harassing whites as they eat, drive, or walk down the street. BLM is not seeking partnership (as I noted in last week’s column). Whites can only satisfy BLM by fleeing their homes, fleeing their neighborhoods, watching their businesses burn, passively acting as punching bags, and, finally, dying.

In this way, BLM is absolutely Hitlerian. To invoke Fest, BLM’s goals include absolutely no civilizing ideas. It’s not trying to build and improve but conquer and destroy. BLM holds out no promise to whites relating to peace, progress, or freedom. It rejects all idealistic trimmings, deeming them unnecessary. Indeed, deeming them counterproductive.

This is key to understanding the massive drop in BLM’s popularity among whites. It’s not just because of the riots and violence. It’s also the same (perhaps unconscious) fear that’s elevated Hitler to the status of ultimate boogeyman: the fear of the oppressive force that can’t be bargained with, that offers no way out, that wants nothing from you but your removal.

Whites can’t “convert” to BLM. They can’t become reeducated enough to escape censure and abuse. Worst of all, they can’t surrender. As BLM terrorists hover over your table at an outdoor café, eating your food and threatening to kill you, you can beg of them, “What do you want from me? What can I do to stop this? Just tell me and I’ll do it!” and you’ll find there is, indeed, no way out. No appeasement.

It’s nightmarish, and whites are beginning to see it for what it is, although possibly not fast enough for the dawning realization to have an impact in November. After all, there are still whites who are trying to reason with BLM. Like Rand Paul, surrounded and attacked by BLM thugs who screamed at him, “Say her name,” in reference to another “martyr,” Breonna Taylor. Following the attack, Paul lamented that the crowd didn’t give him credit for authoring a bill named for Taylor, a bill intended to counter police abuses against all Americans.

An organization obsessed with “blood.”

Hitler’s idealism is right there in the phrase gutem Blut unserer Art. He sincerely believed that his people’s “blood” was good, and that positive things would come from the domination of Europe by that good blood. Hitler did have “civilizing ideas.” It’s just that his civilizing ideas didn’t involve partnerships with people he saw as inferior. But from his perspective, his goal was to improve Europe. You can argue that his perspective was demented, but still, from his viewpoint, he was indeed an idealist.

BLM lacks any such idealism. It’s a motley crew of “bad” blood, blood that is not only incapable of civilizing, but uninterested in doing so. Hitler was obsessed with the future; BLM doesn’t think beyond the moment. It’s like Mugabe and the white farmers: Even your ability to feed us won’t save you. We want you gone, and if we starve, we starve. That’s BLM in a nutshell, rejecting idealistic trimmings while lacking a road map for survival in the burned-out ruins of the cities it sacks.

Hitler’s uncompromising tribalism, but without the idealism. Now, that’s frightening. But not as frightening as the whites who still think they can appease the BLM beast.

Or coexist with it.