Blood at The Vortex 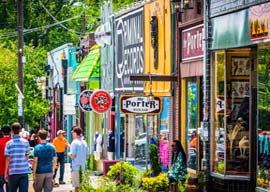 It was still dark outside last Saturday morning when I was driving to get breakfast at a diner. A story came on the local radio news saying that two males in their early thirties had been murdered overnight behind the Vortex Bar & Grill in Atlanta’s Little Five Points neighborhood. The Vortex is a local landmark, seeing as how you have to walk into the mouth of a giant skull to get inside the bar.

About a half-hour after hearing the news of the double murder on the radio, I was gnawing on my omelet when I got a text message from a cartoonist friend of mine telling me that the victims were his two housemates. They all lived a mere two blocks from the murder scene. I had met one of the victims about a half-dozen times, every time at the Star Bar directly across the street from The Vortex.

Last night after my cartoonist friend had guzzled quite a few drinks and received countless condolences from friends, he told me over the phone that the murder happened so close to where he lived, he doesn”t know how he didn”t hear the gunshots.

There are no known witnesses, and the only possible lead to the case”a tenuous one at that”is that around fifteen minutes prior to the murders, three black males reportedly committed an armed robbery about a mile and a half away.

“That’s a gamble one takes with diversity”the possibility that the result will be conflict rather than peace.”

Every large American city tends to have some inscrutable need for a hipster ghetto, and for years Little Five Points has served as Atlanta’s default hipster “hood. It takes its name from a five-point road intersection whose sidewalks are lined with a tightly packed array of what might politely be called “commercially alternative” stores. This is the spot in Atlanta where you”ll find the tattoo parlors and pizza joints and health-food supermarkets and record bins and head shops and vintage clothing boutiques and dive bars and music venues and coffee shops and art-house theaters. You can also find gutter punks and homeless people. If you look closely enough, you can also find heroin and cocaine”or so I”ve been told. It’s one of those patented urban alterna-cultural gathering spots where on any given night you”ll have white hipsters and black gangsters and suburban jocks and fly-fishing lesbians and lifelong yoga addicts all rubbing elbows together.

And sometimes, well, there’s a clash.

A friend of mine says that Little Five Points used to be exclusively white and typically peopled with hacky sack-playing hippie weirdlings. She says it’s become more ethnically diverse and dangerous over the years, but she did not directly imply that there may be any connection between the two. She claims to know a girl who was raped behind a popular Little Five Points thrift store.She says there is “tons” of crime in the neighborhood, most of it committed by low-level thugs who prey upon naÃ¯ve tourists and bumbling visitors who”ve bounced in from the “burbs.

But my cartoonist friend disagrees that the area is crime-ridden. “It’s generally a safe neighborhood. There’s just so much energy and so many people that every once in a while something fucked-up happens. It’s the epicenter. Wherever there’s an artistic community, there’s always going to be that conflict.”

He’s endured quite the run of urban violence himself since he’s lived in and around Little Five Points. When I met him about six or seven years ago, he was renting an apartment about a mile or two away from where he lives now. Back then one night he heard loud sounds coming from the hallway outside his apartment. When he peeked out of his door, he saw a black male attempting to kick in a neighbor’s door. This led to an insanely protracted violent fight between the two of them. He wound up with a facial scar from getting his glasses crushed on his face. He also wound up non-fatally stabbing his intruder, an act that police determined to be in self-defense.

About three or so years ago”after he”d moved into the house in Little Five Points”he had a violent encounter with a notorious neighborhood asshole who refused to leave his premises. He used his sensitive cartoonist fingers to grab a baseball bat and beat the pesky interloper with it, which landed him 48 days in jail. Charges were dropped because the trespasser he”d bludgeoned failed to show up for court.