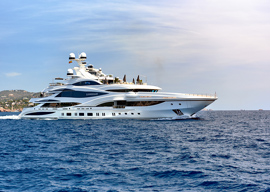 They used to say that the primary function of a boat was to be beautiful. I suppose that is why boats are feminine, as in “She’s a real beauty, that one.” Puritan is a beauty and I’ve had a great time on board, especially when anchoring near some modern horror, bloated and overstuffed with “toys,” its occupants reflecting the boat: fat, ugly, and invasive.

Why is it that boats reflect their owners, like dogs do, and as women used to? (Although one can get killed for calling a female “owned” nowadays.) Show me a tart and she’s sure to be with a James Stunt type, or show me an overstuffed gin palace like Lionheart (the greatest misnomer ever) and I’ll show you a barbarian lowlife owner like no other, Philip Green. Mind you, I’m not saying anything that has not been said before; after all, it’s a very old story that tells us everything reflects those who own things, whether it’s a house, a boat, or a mistress. I suppose one does not own a wife, at least not in the West, ownership of wives being part of the Saudi and Gulf culture, another misnomer if there ever was one.

“When Zuckerberg tells politicians the world over that he is out to connect people, what he’s really doing is pitting them against one another.”

Which brings me to even more unpleasant subjects, like Facebook and Amazon. The latter is destroying communities the world over by undercutting High Street stores, with governments doing nothing to protect what are known in America as mom-and-pop stores, backbones of small communities. And now it appears Amazon pays the minimum in taxes to boot. So I ask you, if government is there to protect its citizens from, say, criminals or drug dealers, why is government absent when it comes to a predatory company out to destroy all opposition and pay the minimum tax in the process?

I’ll tell you why—moola. Amazon is too big and too powerful, and politicians are too scared to challenge it or bring up the fact that it ruins communities. The New York Times, which genuflects to billionaires like no other paper, even featured Jeff Bezos, the richest man in the world —at least last week—as a “tech style icon…with mud-brown scruff of hair shaved rigorously clean, and with biceps grown bulgy.” Four large pictures of one of the world’s ugliest men accompanied the puff piece by Vanessa Friedman, who should really be ashamed of herself. Bezos is a pop-eyed, bald, Concorde-nosed mogul whom Friedman breathlessly describes as focused on saving time. Now she writes he “has acquired an entire wardrobe of bomber jackets.” Gee whiz, now I understand why the Times hates Trump as much as they do; they’re on the side of Bezos, who truly loathes The Donald and owns an entire wardrobe of bomber jackets. Who was it who said show me your enemies and I’ll show you who you really are?

And speaking of disgusting persons, here’s another great looker whom the world could have done without, and would have been much better off had he been aborted somewhere along the way. Mark (the human fart) Zuckerberg, a human mutant nevertheless, whose Pandora’s-box invention (actually borrowed from not-very-sophisticated twins) has not connected people, as the con man Zuckerberg insists, but has manipulated democracy and become a template for bad people to say bad things about other people.