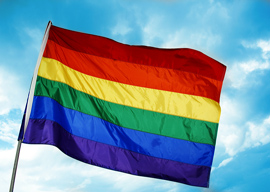 The three words were emblazoned on her black T-shirt. Rainbow-colored and printed in undulating font, the three-word tautogram hung below the less-flashy name of her employer, Sweetgreen. Written only in plain white text, the “fast-casual” salad eatery was signaling its commitment to the small segment of the population who are nonheterosexual and enjoy blueberry and basil mixed into their summer greens.

The shirt, which I noticed on a young woman last week while walking down historic King Street in Old Town, Virginia, is utterly banal in 2018. If a business advertised its dedication to the gay community ten years ago, that would be one thing. They would be taking a financial risk. They would risk alienating part of their customer base still not comfortable with same-sex couples tying the knot. Today, endorsing the gay lifestyle is the safest marketing move a company can make.

June, if you didn’t know, is “Pride Month,” thirty days reserved for parades of scantily dressed celebrants and Fortune 500 companies injecting rainbow color into their logo on Twitter. Long gone are the days of hiding in the closet. Alternative sexual practices haven’t just progressed past having a stigma attached to them—now they’re the stuff of saccharine celebration. Portrayed lovingly on cable TV series, commercialized by wedding venues, even enshrined within our inviolable IRS forms, gayness is now bourgeois.

“Being gay has become that great enemy of queer expression: boring.”

And by going bourgeois, being gay has become that great enemy of queer expression: boring. Painfully boring. Sorry, but when JetBlue endorses your lifestyle, you’re no longer an anomaly. You’re a middle-class working stiff with a Costco card and a piddling 401(k).

Even the words and phrases big companies parrot to show their “pride” have become bereft of meaning. “Diversity,” “tolerance,” “acceptance,” “uniqueness”—these words that once held concrete definitions in Merriam-Webster have succumbed to corporate overuse. The only thing they still signify is that Bank of America still thinks of them as good advertising fodder.

None of this is helped by the fact that the most obstinate opponent of homosexuality, the church, is beginning to toe the “love is love” line.

Every major branch of Christianity is softening its opposition to gay marriage. Many Protestant denominations have long given up the fight, embracing same-sex marriage to try to refill dwindling pews. Despite a rich theological defense of traditional marriage, Catholic opposition is fading. Even evangelicals are starting to give in, despite being the biggest opponents of same-sex nuptials.

Back in 2008, anti-war writer Justin Raimondo, an open homosexual, took an old-fashioned approach to gay marriage. He denounced the very concept as an ontological oxymoron that sucked the spice out of the typical gay life. By begging for mainstream acceptance, gays, lesbians, and the like were ceding their wild individuality to the stale mass collective. “What started out as a movement for ‘gay liberation,’” he wrote, “has turned into a campaign to make gay society as restrictive of sexuality (particularly male sexuality) as the straight world—and even more boring.”

With the novelty of homosexuality stripped away, we’re left with an unfortunate side effect: the state trying to ram it into the mosaic of normal life. The recent Supreme Court decision in Masterpiece Cakeshop v. Colorado Civil Rights Commission was a fitting representation for what the mainstreaming of homosexuality will mean to those who still hold on to the traditional beliefs about hanky-panky and matrimony.