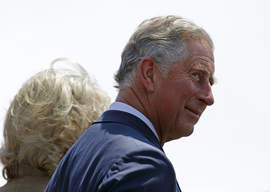 At dinner the other night a friend wondered what came first, social climbing or name-dropping? It’s obviously a very silly question, and we all had a laugh over it: “As Achilles told me in his tent the other evening, Helen always fancied him and Menelaus didn’t like it a bit.” Or, “I’m rather tired of listening to Claudius complaining that Agrippina doesn’t hold a candle to Messalina in the sack.” We played that game for a while and then I dropped the name Highgrove, and the first time the Queen was seen in public with Camilla. I began to describe the outdoor lunch and my guests started to drift off. “No, it’s true—I was there,” I told them. Actually, we were discussing the new Tom Bower book on Prince Charles and wondering how much of it is true. I know Tom Bower slightly, and was interviewed at length by him for the hatchet job he did on Conrad Black. But I was delighted at the hatchet job he did on the phony Mohamed Al-Fayed. The reason I brought the lunch up was because it’s mentioned in the Prince Charles opus making the rounds nowadays.

“Guess where the little Rocket Man and The Donald will meet and negotiate not to blow the world up?”

According to Bower, the Queen simply would not meet Camilla. Then Prince Charles gave a lunch at Highgrove for King Constantine’s 60th birthday in the summer of 2000, and that’s where yours truly comes in. The invitation was standard, but I was made to understand that details of the lunch should not appear in my next column. The King of Greece is a very nice man and a very good friend. He put it to me gently. Security was tight as hell and my driver was quite impressed. He was used to bringing me home from nightclubs in a very different state than my present one. He had a problem finding Highgrove as the house wasn’t listed under Soho clubs.

I remember saying hi to Camilla, who was acting as hostess, and seeing the Queen and how tiny she is, and then I sat down to lunch and began to down a very fine wine. It was hot, the sun was shining, everyone was in a very good mood, and I behaved myself until it was time to be given a tour of the house by Prince Charles and to inspect his plants. I don’t know who was faster off the mark to escape the place, the man who designed the Titanic and was first on a lifeboat, or the poor little Greek boy, off to Badminton for some cricket.

The radar about the lunch was buzzing off its hinges, but the hacks had been unable to infiltrate. My friend John O’Sullivan and I had dinner and he was laughing over the fact that I was the only hack present but was sworn to secrecy. Now, here’s the gist of it: Camilla and the Queen were at different tables, and as far as I know there was no contact. What took place before or after, I haven’t a clue.

When Tom came to New York and interviewed me about Lord and Lady Black, I told him about an incident when Conrad was extremely angry with me for something I had written about Israel. Boris Johnson, the editor at the time, refused to fire me. That’s when I received a call from Lady Black—I was told to wait on the line—but the moment she came on I said to her in a rather aggressive manner that only the editor could fire me and then I hung up. She never got a word in edgewise, as they say.