Brett Kavanaugh Is a White Man 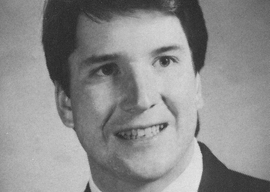 In case you’ve been vacationing on Pluto and were unaware, Supreme Court nominee Brett Kavanaugh is being accused of tryin’ ta sorta do somethin’-somethin’ to a woman in the early 1980s when he was 17 and she was 15.

Personally, I have no pit bull in this Rape Game. His guilt or innocence should have been determined way back in the early 1980s by a court of law, but his alleged victim is a patient woman who decided to wait about three and a half decades before saying anything publicly.

Both Kavanaugh and his accuser, a weepy, lumpy-faced gal named Christina Blasey Ford, are white. You would notice that immediately upon seeing them. But although the accuser and accused are both white, I don’t see any evidence of either one of them making a point of it.

Beyond that, I don’t see how it’s relevant. As we all know, people of all colors can rape and get raped. That’s part of the core meaning of equality. In times of war, the winning side tends to rape the losing side’s women. In many cases, war is based upon ethnic divisions. But since both parties here are white, it’s hard to see race as a motivating factor in whether or not he aggressively tugged at her panties lo, all those years ago.

Don’t try telling that to our cultural experts in the media. Judging from their leap to judgment, Brett Kavanaugh is a white male rapist who rapes because white men are rapists who feel it’s their God-given right to rape, and their God is white in case you were wondering.

If you think I’m overstating things, choke on this thick, veiny text block:

Hell hath no fury like a white man told he can’t take whatever he wants whenever he wants it.
—Reporter Steven W. Thrasher

Kavanaugh is the kind of dangerous, entitled white man many of us have encountered all throughout our lives. If he is confirmed, I’m even more afraid of the revenge he’ll seek after this hearing.
—Activist Raquel Willis

Time to utterly crush the old white boy power base in Washington. Because it looks like this committee and it looks like Biff Kavanaugh and it needs to be eviscerated permanently… it is the old America and must give way to the new and only version worthy of its promise
—Pathologically anti-white race-baiter Tim Wise

“Although the accuser and accused are both white, I don’t see any evidence of either one of them making a point of it.”

Kavanaugh feels betrayed because he’s a born-into-privilege white man who got to his station in life by sucking up and shitting down.
—Reporter Tina Dupuy

Arrogant white men must have no place…Women’s views, women’s pain, and the struggles of anyone other than the patrician white male, simply do not count when a senior white male’s reputation or future is at stake….It is time they are put out to pasture….The arrogant white male has no place in making the laws of this wonderful country.
—Letter to the Durango Herald

They know the optics of 11 white men questioning Dr. Ford … will be so harmful and so damaging to the GOP.
—CNN Analyst Areva Martin

What are those — that collection of old white men going to do?
—MSNBC analyst Cynthia Alksne

Unfuckingbelievable. Ford was entitled to rage but held back. Instead Kavanaugh rages, an entitled white man who cannot abide being challenged.
—Author Rabia O’Chaudry

The angry white man – crying routine is so typical of an alcoholic. Is #Kavanaugh drunk?
—Author Eva Golinger

The Republican side on the Senate Judiciary Committee is all white men…. — Irin Carmon, senior correspondent for New York Magazine, on MSNBC

Once again, it will be all white men on the Republican side of the Judiciary Committee questioning both Judge Kavanaugh and Doctor Ford.
—CNN anchor Poppy Harlow

It is a lineup of white guys over the age of 50.
—MSNBC anchor Stephanie Ruhle

Are these Republican white men essentially going to ask her if she’s telling the truth? Are they going to question her credibility?
—MSNBC guest and former Hillary Clinton campaign official Adrienne Elrod

Women across this nation should be outraged at what these white men senators are doing to this woman.
—Rep. John Garamendi, D-California

These white men, old by the way, are not protecting women. They’re protecting a man who is probably guilty.
—Joy Behar

The answer is plain: Conservative voices want to give Kavanaugh a pass because he is a white man who will represent their interests….We must call out the demons of white privilege that allow white men to be considered innocent from the very start while ethnic groups such as blacks in this country go on trial even after their own blood has unjustly been spilled.
—Religion News

Of course, you know that they’ll be fine, that this is a bump in the road, that when privileged white men fall, they somehow fall up as if gravity doesn’t apply.
—Damon Young, The Root

call your senators and tell them to vote no for Kavanaugh – the future of our country deserves more than a privileged white boy who’s Spent his whole life over-drinking and can’t answer a simple question without acting more immature about it than a 4 year old.

Brett Kavanaugh and America’s Insistence on White Male Virtue…To watch him weaponize his rage, his tears, and his silence throughout that dreadful hearing was to watch a white man used to acting with impunity.

This was white male arrogance on display. And it was a sight.
—Anne Branigin, The Root

But the histrionics of Graham and Kavanaugh showed once again how hell hath no fury like an entitled white man denied. No humility. No contrition. No humanity beyond his narrow interests.
—Jonathan Capehart, The Washington Post

Mediocre White Man Falls Apart and Is Promptly Put Back Together…Kavanaugh’s absolute master class in white-male privilege….Kavanaugh’s alternately blundering, messy, enraged, arrogant performance gave us a close-up look at what white fragility and entitlement look like: Even when you’re accused of a serious crime, you’re the one who’s being persecuted.
—Heather Havrilesky, The Cut

Brett Kavanaugh and the Innocence of White Jocks….The privilege, more specifically, pertains to white men, whose accomplishments we are to take as earned, the result of grit rather than natural gifts.
—Lauren Collins, The New Yorker

I’m a single white male from South Carolina, and I’m told I should just shut up, but I will not shut up.

For his part, Kavanaugh said the weeklong National Rape Crisis had nothing to with being white and everything to do with the fact that the Democrats are seeking blood vengeance for his aggressive probing of President Bill Clinton for being a serial perv.

From my standpoint, as a black American, as far as I’m concerned, it is a high-tech lynching for uppity blacks who in any way deign to think for themselves.

I doubt that Democrats went after Thomas for being black. I sense they went after him for being a black Republican.

But since the press seems so keen to harp on the idea of white male rapists, I feel compelled to note that according to government statistics, white males have a lot of catching up to do with other races when it comes to the sordid art of sexual assault. And if interracial rape were the Kentucky Derby, these sad white steeds have barely left the starting gate.