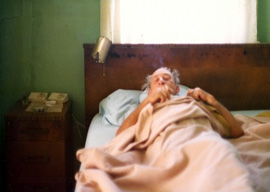 I have been bedridden recently because I broke my hip in a fall. I am no spring chicken: I am a 70-year-old man and do not expect to live much longer; my body is falling apart! Unfortunately I still have my wits about me. I would prefer to be sick in the mind instead of sick in the body. Only one of my three children has paid any attention to me and I am considering leaving her everything. Is that wrong?

—Alone in Bed in Bedford

Dear Alone in Bed in Bedford,

What it sounds like is that you are suffering from a simple case of man flu rather than broken-heartedness. You broke your hip, you are in bed, and yes, that must be annoying, painful, lonely, and has obviously left you with too much time on your hands to consider where you came from, who you are, and where you are going. So I strongly suggest you hold off on any big decisions such as disinheriting two of your three children, which is always an unfair and bad idea. It is fundamental to keep in mind you are not actually dying—you unfortunately broke your hip but you will recover! And you cannot expect the whole family to show up at your bedside to impart their final sentiments because, once again, you are not dying!

“Trust me when I say that unhappy women are very hard to ignore and nine times out of ten they will let you know in painstaking detail why they’re unhappy.”

It is simply unhealthy and delusional to sit in bed staring at the wall, TV, or computer while contemplating the abyss and convincing yourself you’re able to make any important decision under those conditions. You are placing yourself in solitary confinement, albeit a comfortable and (hopefully for you) nice-smelling one. Solitary confinement is a torture technique. People simply cannot handle it; it makes them go mad. So Stop, Drop, and Roll; stomp out the flames of your self-pity and rethink your decision. Your life isn’t over unless you want it to be.

I am a French man and I married a very attractive American woman. We live in Bordeaux, where I grew up. Even though she speaks perfect French and has lived here for 10+ years, she never really made any friends. I am a social person and I like to go out, but she usually does not want to come. She never makes plans of her own, and I would like to see her have fun; she is great with kids and deserves a good time. Even though she does not seem bothered about her whole social problem, I feel really guilty. Should I force her to come out more, or should I try to make some American friends for her?