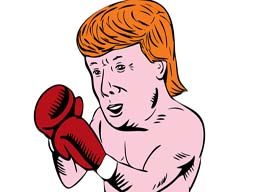 Friday evening’s Donald Trump rally in Chicago was broken up by a foul-mouthed mob that infiltrated the hall and forced the cancelation of the event to prevent violence and bloodshed.

And the reaction of Marco Rubio, Ted Cruz and John Kasich?

With his “dangerous style of leadership,” Trump stokes this anger, mewed Rubio, “This is what happens when a leading presidential candidate goes around feeding into a narrative of bitterness and anger and frustration.”

Rubio implies that if Trump doesn’t tone down his remarks to pacify the rabble, he will be responsible for the violence visited upon him.

Kasich echoed Rubio: “Donald Trump has created a toxic environment (that) has allowed his supporters and those who sometimes seek confrontation to come together in violence.”

But were the thousands of Trump supporters who came out to cheer him that night really looking for a fight? Or were they exercising their right of peaceful assembly?

Cruz charged Trump with “creating an environment that only encourages this sort of nasty discord,” thus offering absolution to the mob.

“As news outlets have reported, Friday’s disruption at the University of Illinois-Chicago auditorium was a preplanned assault.”

Friday night cried out for moral clarity. What we got from Trump’s rivals was moral mush that called to mind JFK’s favorite quote from Dante: The hottest places in Hell are reserved for those who in time of moral crisis maintain their neutrality.

As news outlets have reported, Friday’s disruption at the University of Illinois-Chicago auditorium was a preplanned assault.

People for Bernie, a pro-Sanders outfit, tweeted, “[This] wasn’t just luck. It took organizers from dozens of organizations and thousands of people to pull off. Great work.”

Now, Sanders did not order this assault on the civil rights of Trump supporters. But MoveOn.org has endorsed him and “Bernie” signs and T-shirts were everywhere among the disrupters. Hence, he has a duty to disavow this conduct and those who engaged in it.

If Sanders refuses, he condones it, and is morally complicit.

Can one imagine how the media would pile on Trump if working-class white males in Trump T-shirts invaded a Hillary Clinton rally and shut it down?

Can one imagine how the networks and cable TV channels that host town halls with the candidates would react if hell-raisers snuck into their audiences and shouted obscenities during discussions?

The keening over the First Amendment would not cease for weeks.

Some of us have been here before, and know how this ends.

When the urban riots broke out in the ‘60s, Hubert Humphrey declared that, if he lived in a ghetto, “I could lead a pretty good riot myself.”

At his 1968 convention in Chicago, radicals baited and provoked the cops in the front of the Conrad Hilton, and as this writer watched, their patience exhausted after days of abuse, Chicago’s finest tore into the mob and delivered some street justice.

“Richard Nixon,” wrote Hunter S. Thompson, “is living in the White House today because of what happened that night in Chicago.”

Hunter got that one right.

That fall, Humphrey was daily assailed by the kinds of haters now disrupting Trump rallies. Everywhere he went, they chanted, “Dump the Hump!” At times, Humphrey came close to tears.