Calamity of So Long Covid 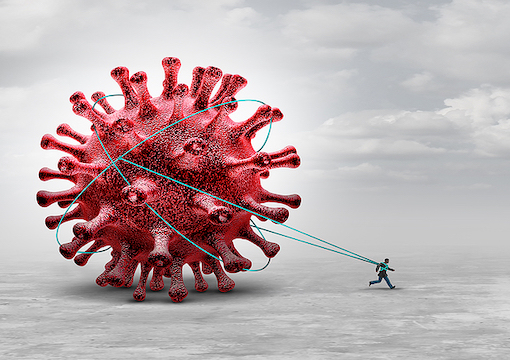 You didn’t think you could just walk away from Covid hysteria, did you? You didn’t think it would just end, right? In fact, “Phase II” is about to begin. And I’m not talking about more masks ’n’ jabs. I’m talking about a new iteration, a mutation. Not a viral one, but a metamorphosis in terms of what Covid represents to the left.

A transition from disease to identity.

But before we get into that, let’s pause for a moment to reflect on poor Dave Weigel. The WaPo journalist, one of the best in the biz, is doing a month’s detention for retweeting an Al Bundy-esque “battle of the sexes” joke. The author of his Ms. Fortune is, well, was fellow WaPo scribe Felicia Sonmez. Sonmez claimed that Weigel’s retweet “traumatized” her. Then she claimed that the Post’s lackluster response to her traumatization traumatized her further. WaPo eventually fired her, which I’m assuming must’ve killed her, considering her fragility.

“Being killed by jokes is on the way out. Long Covid is the new white-woman path to victimhood.”

This wasn’t Sonmez’s first time at the BS-PTSD rodeo. In 2018, after she #MeToo’d a male colleague, Sonmez wept about being “traumatized” by the “trauma” of getting a guy fired:

The trauma of coming forward really hit me. I couldn’t bike. I couldn’t drive. The one time I finally was able to go to the grocery store, I just sort of stood there in shock. My world just, really quickly, sort of shrunk.

The day Kobe Bryant and his daughter died in a copter crash, Sonmez tweeted that Bryant was a rapist. When the Post placed her on leave for traumatizing Bryant’s widow, Sonmez wailed about her traumatization at being suspended for traumatizing. “My trauma response kicked into overdrive,” she wrote, resulting in “a whole lot of vacant staring.”

Sonmez represents a type of white female leftist who desperately seeks victim status, usually by claiming to have been mortally wounded by words (jokes, criticism, the word “no”). The problem is, in the victimhood hierarchy, white women ravaged by letters don’t merit the awed respect of blacks or trannies, the human equivalents of the fiddle-leaf fig (a plant so delicate the slightest environmental shock kills it).

“Trauma by word” has often been the college-educated white liberal woman’s way to get in on the victimhood action. But the tide seems to be turning against people who hear a joke and declare, “Verily, I am slain.” As recent Netflix specials by Dave Chappelle, Ricky Gervais, and Norm Macdonald have failed to produce a trail of bodies in their wake, it’s growing increasingly harder to claim homicide at the hands of humor.

In the case of Sonmez’s most recent death, it’s striking how few allies she found, and how much (deserved) support Weigel received. Weigel still has a job; Sonmez’s whining cost her hers.

A decline in sympathy for those R.I.P.’d by LOLs will hit white women hard. Blacks and trannies are automatic victims based purely on identity, the “burden” of being who they are. A black can “literally die” via inherited historical trauma. A tranny can be “totally murdered” by a 1990s biology book. But white women need a partner, a white man, a heavy, a heel cast as victimizer.

The ultimate ignominy: The type of woman most likely to declare “I don’t need a man” ends up totally needing a man to compete in the victimhood sack-race. Sure, white women can claim to be trannies (as Abigail Shrier points out, tranny-mania has especially caught fire among impressionable young girls), but that requires commitment to the bit, like alteration of physical appearance. Black women don’t have to lop off their boobs to be special; they’re “brave and stunning” as-is.

So that’s where Covid comes in. A few weeks ago a Florida school principal and dedicated foe of Ron DeSantis died from unspecified causes. The principal, who’d spent the past two years demanding the masking of Florida schoolchildren, had contracted a mild case of Covid back in June 2020. When he croaked two years later, his loved ones blamed DeSantis, because, since the principal once had Covid, surely his death was “long Covid.”

This case was covered in the June 5 Takimag Week That Perished, and a prediction was made: Long Covid is going to be the next “victim cred” identity vehicle.

And wouldn’t you know it, the very next day, June 6, there was WaPo with a front-page piece about how long Covid is the next “victim cred” identity vehicle. Long Covid is “a mass-disabling event that experts liken to HIV, polio or World War II,” an “entirely new identity” for the “newly-disabled” (they call themselves “Covid long-haulers”) who are banding together to seek “justice” and “confront structural inequalities.”

According to Rebecca Cokley of the Ford Foundation’s Disability Rights program, the fact that long Covid allows its “sufferers” to be on the same level as “children in Flint and black women with alopecia” is “one of the things that’s so beautiful about disability.”

The Post gleefully describes how “liberal think tanks” are feverishly working toward making “long-haulers” a protected victim group in the same class as blacks and LGBTs.

Lisa McCorkell, a “long-hauler” activist, told the Post that when long Covid rendered her bedridden, it was “empowering.” McCorkell, a white woman, added that now she has “remarkable access to people and power that others have struggled to get for a long time.”

The very morning that Post piece was published, guess who approvingly tweeted it? Felicia Sonmez.

Being killed by jokes is on the way out. Long Covid is the new white-woman path to victimhood. And, unlike death by humor, long Covid will, according to President Biden, soon be a federally recognized disability.

In other words, while we can ridicule people who claim jokes murdered them, laughing at or in any way denying the reality of long Covid will be an ADA violation and hate crime.

Best part is, college-educated white women can keep their titties! All they have to claim is (pick one) brain fog, fatigue, forgetfulness, anxiety, lack of concentration, or malaise. And white guys can get in on the fun too! One reported symptom of long Covid in men is “decrease in size of penis or testicles.”

Long Covid is how whites who wouldn’t otherwise have victimhood cred can be like trannies without having to be tranny. Because just like trannyism, long Covid has no scientific basis in reality.

A recent JAMA Internal Medicine study found long Covid to be purely psychosomatic: “Physical symptoms (of long Covid) may be associated more with the belief in having experienced COVID-19 infection than with actually being infected with the SARS-CoV-2 virus.” An Annals of Internal Medicine study last month found that among “long-haulers,” “Exploratory studies found no evidence of persistent viral infection, autoimmunity, or abnormal immune activation. Extensive diagnostic evaluation revealed no specific cause of reported symptoms in most cases.”

Also last month, Scientific American quoted a UC San Francisco researcher who admitted that when it comes to long Covid, “We don’t have a definition, we don’t have a biomarker, we don’t have an imaging test, a mechanism or a treatment.” And NPR quoted an infectious disease specialist from HHS who explained that despite extensive testing of “long-haulers,” “We were not able to find evidence of the virus persisting or hiding out in the body. We also did not find evidence that the immune system was overactive or malfunctioning in a way that would produce injury to major organs in the body.”

Even the CDC admits that “there is no single test for post-COVID conditions.”

At the same time, JAMA, Annals, the CDC, and the European Society of Clinical Microbiology and Infectious Diseases discovered a very inconvenient fact about long Covid: “Female gender is associated with long COVID syndrome. Women are characterized by a higher proportion of most physical symptoms and all psychological symptoms than men. Female gender is associated with a threefold higher risk of long COVID.”

An “increased risk for PASC (long Covid) was noted in women and those with a history of anxiety disorder.”

“Women and those suffering from anxiety were more likely to end up with long COVID.”

So, you have a “disease” that you can’t test for, has no biomarkers or footprint, can crop up years after a Covid infection, can exist in people who never had Covid, and seems to be most prevalent in women with preexisting anxiety disorders.

And the “afflicted” are demanding “protected group” entitlements. But how will that work, if the “disease” has no basis other than self-reporting?

Well, it’ll work like trannyism. The reality of something with no scientific basis will be enforced through government edict and the smearing of dissenters.

The European Respiratory Society has already declared it “sexist” to mention the prevalence of long Covid among women. Indeed, merely citing those stats “could impact the healthcare and working rights for female patients with long COVID.”

In May, California psychiatrist Dr. Julian Lagoy told the Verywell Mind journal that “mental health practitioners, when it comes to disability, often see it as a biological reality rather than a wider identity.” To Lagoy, it doesn’t matter whether long Covid is real. He believes that “those who identify with disability” are as disabled as the actually disabled, and he applauds the “disabled militancy” of “long haulers.”

Question long Covid and everyone dies!

Of course, white “long-haulers” understand that in order to truly mainstream their new identity, they need to involve nonwhites, who are still at the top of the victimhood pyramid. Hence Politico reporting that “people of color have a higher prevalence of long Covid” and the CDC declaring that “health inequities may put some people from racial or ethnic minority groups at greater risk for developing post-COVID conditions.”

And in the U.K., the University of Westminster is paying “people from Arab, Black, or South Asian backgrounds” to say they have long Covid. A £35 ($43) shopping voucher is being offered to all people of color who’ll “share their long Covid experiences.”

Behold the birth of an entirely new identity that’ll be a boon to victimhood-seeking whites who’ll now have something more powerful than “a joke killed me,” but less high-effort than “I’m a tranny,” to wield in their quest for “remarkable access to people and power” via protected identity-group status.

Express doubts about long Covid? You’re a genocidal sexist racist, because, like trannyism, long Covid is not “a biological reality” but “a wider identity.” Under ADA, failure to acknowledge long Covid will become illegal. And start counting down to “long Covid denial” becoming a bannable offense on social media.

Get ready to welcome your new long Covid overlords. And even with their fatigue and small penises, expect a vigorous reaming as Covid shifts from disease to social construct.