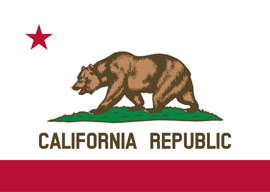 I just got back from California, and boy, is my soul tired.

I always feel trapped, surrounded, and claustrophobic there—or at least in the LA megalopolis that eats up the state’s bottom quarter. California has more people than Canada. Almost twice as many as Australia.

The place is also a wall of cars. One of the days I was there, it took about nine hours merely to run two errands through LA and Orange County. Less than 90 miles roundtrip. But NINE HOURS, all of it staring at exhaust pipes and the brown strip of smog that’s always slung over the horizon like an executioner’s hood.

But even when you’re outside of the LA hydra, the state still manages to feel overcrowded. On Friday night, I faced an endless beeline of red taillights climbing up into the high desert all the way from Rancho Cucamonga to the Nevada border. When you’re a born misanthrope and you’re somewhere way out between Barstow and Baker late at night and there’s still so much traffic that you can’t even go the speed limit, living on the moon’s surface seems preferable to being trapped in this overpopulated wasteland.

It was the first time I’d been back in ten years. I’d lived in Hollywood—a half-block from Frederick’s, to be exact—in the late 80s and early 90s. I made it through the Rodney King riots, the OJ chase, the Northridge earthquake, and the state’s increasing Mexifornication until I finally heard a deep rumbling voice—divine or demonic, I’m not sure—telling me GET OUT BEFORE IT’S TOO LATE. So about a quarter-century ago, I ran from California screaming and haven’t regretted it for a minute.

“If you remove California from the USA, America is truly Trump Country.”

There are beautiful places in California, almost always where there aren’t too many people around. The ever-shrinking non-congested areas are among the nation’s prettiest. I love Death Valley and the redwoods and the Salton Sea and Yosemite and Mono Lake.

I imagine that in the 1940s and 50s, California was nearly paradise. But the state’s main problem is also the main problem with Florida—it seems as if maybe a half-dozen people were born there and the rest moved there. It feels like most of the residents came there because they were fleeing from somewhere else. There’s a rootlessness that engenders a soullessness. There’s really no common bond except for the fact that there’s no common bond. Socially and demographically, California is one big melted chunk of plastic cancer.

So as I drove out of California on Friday night, I realized that if the state were to leave the Union, I would not stand in its way.

I spoke with friends who are planning to leave the state because they’re terrified of saying a positive word about Donald Trump for fear of having their heads smashed in with bike locks. And I don’t blame them, seeing as how the state has thrown a collective conniption ever since he announced his candidacy. Californian radicals threw some of the most violent tantrums at Trump rallies during the entire campaign, and, of course, Berkeley gets incinerated every time someone to the right of Che Guevara tries to make a peep.

If you removed California from the 2016 presidential election, Trump would have smashed Clinton in the Electoral College in a 306-177 rout. He also would have flogged her in the popular vote by nearly 1.5 million.

If you remove California from the USA, America is truly Trump Country. There’s a cultural rift in this nation deeper and potentially more catastrophic than the San Andreas Fault.

Most Americans ain’t too fond of a state that recently downgraded intentionally infecting someone with HIV from a felony to a misdemeanor. One opinion poll after the next shows that most Americans wouldn’t think too highly of a state that offers sanctuary for illegal aliens, and right now California is the only one that does that. Most Americans probably aren’t too cool with a state where public schools insist on the right to ban American flags.

And most Californians—or at least the ones who speak English, because at least I can understand what they’re saying—seem to think that every American who lives between the enlightened coasts is an incestuous retard.

So maybe it’s time for a split.

Ever since the California Republic shed its sovereignty to become an American state in 1850, there have been more than 200 formal proposals to secede—that averages out to more than one per year. The most recent push to get the hell out of the USA was originally called such unwieldy names as “Caleavefornia,” “Califrexit,” and “Calexit,” but it seems as if the momentum is tilting toward an organization that calls itself Yes, California. They propose a ballot initiative for a statewide vote in 2021 as to whether Cali should perform nationus interruptus with the United States.