Can Trump Be Stopped? 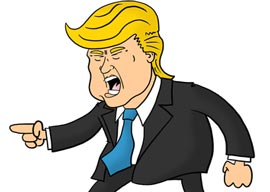 Three months ago, this writer sent out a column entitled, “Could Trump Win?” meaning the Republican nomination.

Today even the Trump deniers concede the possibility.

And the emerging question has become: “Can Trump be stopped? And if so, where, and by whom?”

Consider the catbird seat in which The Donald sits.

An average of national polls puts him around 30 percent, trailed by Dr. Ben Carson with about 20 percent. No other GOP candidate gets double digits.

Trump is leading Carson in Iowa, running first in New Hampshire, crushing the field in Nevada and South Carolina. These are the first four contests. In Florida, Trump’s support exceeds that of ex-Governor Jeb Bush and Sen. Marco Rubio combined.

If these polls don’t turn around, big time, Trump is the nominee.

And with Thanksgiving a month off, then the Christmas season, New Year’s, college football playoffs and NFL playoffs, the interest of the nation will drift away, again and again, from politics.

“Look to Marco to emerge as the establishment’s last best hope to take down Trump.”

Voting begins Feb. 1 in Iowa. Super Bowl Sunday is Feb. 7. And the New Hampshire primary will likely be on Tuesday, Feb. 9.

We are only three months out, and Trump still holds the high cards.

After months of speeches and TV appearances, he is a far more disciplined campaigner and communicator. In a year when a huge slice of the nation is disgusted with political correctness, wants to dethrone the establishment, wipe the slate clean and begin anew with someone fresh, Trump is in the pole position.

His issues—secure the border, send illegal immigrants back, renegotiate rotten trade deals that shipped our jobs abroad—are more in tune with the national mood than pro-amnesty, Obamatrade or NAFTA.

Wall Street Journal conservatism is in a bear market.

Trump says he will talk to Vladimir Putin, enforce the nuclear deal with Iran, not tear it up on Inauguration Day, and keep U.S. troops out of Syria. And South Korea should pay more of the freight and provide more of the troops for its own defense.

A nationalist, and a reluctant interventionist, if U.S. interests are not imperiled, Trump offers a dramatic contrast to the neocons and Hillary Clinton, the probable Democratic nominee. She not only voted for the Iraq war Trump opposed, but she helped launch the Libyan war.

The lights are burning late tonight in the suites of the establishment. For not since Sen. Barry Goldwater won the California primary in 1964 have their prospects appeared so grim.

Can Trump be stopped?

Absent some killer gaffe or explosive revelation, he will have to be stopped in Iowa or New Hampshire. A rival will have to emerge by then, strong enough and resourced enough to beat him by March.

Iowa is the ideal terrain for a religious-social conservative to upset Trump, as Mike Huckabee showed in 2008 and Rick Santorum in 2012.