Canada on its Knees 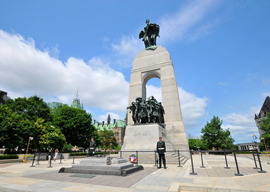 I”m in Toronto right now guest-hosting a show on Sun News called Straight Talk. Thank God. The Canadian media have been dominated by the CBC since the 1930s and they make MSNBC look like Fox. When the Sun came out in 2011, it introduced the possibility that liberals might be full of shit and the entire country had a heart attack. This is the nation where a human rights commission will sue you personally for hate speech, even if what you said is true. They”ve sued Ezra Levant several times and he’s the most popular host on the network.

It’s the only sane place in Canada to be right now, which is why I felt so lucky to be at Sun headquarters when jihadist Michael Zehaf-Bibeau assassinated Cpl. Nathan Cirillo at Canada’s National War Memorial on Wednesday.

Generations of multicultural pandering have turned Canadians soft, and even before the shooting we were hearing about how crucial it is to reserve judgment regarding Islam. On Monday morning, another radicalized nut job, Martin Couture-Rouleau, assassinated Warrant Officer Patrice Vincent by smashing into him with his car. Instead of getting angry, Canadians called for tolerance. They refused to call the terrorist a terrorist and insisted it was some poor, disenfranchised youth who was mad at us for taking too long to renew his passport. Toronto Star reporter Tonda MacCharles asked the RCMP commissioner if Couture-Rouleau had been frustrated in an attempt to leave, perhaps? Yeah, that’s it. It’s our fault for inconveniencing him. Hey, Tonda, we refused his renewal because we saw him as a potential danger. What are we supposed to do, let him go train in Syria so he can come back and build bombs with aplomb?

“They refused to call the terrorist a terrorist and insisted it was some poor, disenfranchised youth who was mad at us for taking too long to renew his passport.”

There was one reporter to admit it was a tragedy. CTV’s Don Martin used that word, which is surprising because CTV leans way further left than Al Jazeera. Then he added: “The timing will be politically advantageous for [conservative Prime Minister] Stephen Harper.” Can you imagine Martin, sitting next to the victim’s crying mother and saying, “What a tragedy,” before adding, “… for the campaign!”?

This is the trouble with Canada in a nutshell. They cannot be shaken from their multicultural utopia. Immediately after the Boston Bombing, Canada’s next Prime Minister, Justin Trudeau, told us: “[T]here is no question that this happened because there is someone who feels completely excluded … And our approach has to be, where do those tensions come from?”

I”m reminded of the Chris Rock bit where he talks about having too many girlfriends and trying to get rid of them by being an asshole. He says they just end up loving you more until you”re like, “Won”t one of you bitches dump me?” Trudeau is the same naÃ¯ve kid who said our involvement in the Middle East has more to do with Harper’s ego than any valid beef with Islam. To Justin and many other Canadians, fighting extremism is nothing but right-wing assholes pulling their dicks out. I”m not exaggerating. “Why aren’t we talking more about the kind of humanitarian aid that Canada can and must be engaged in,” Trudeau said at a conference in Ottawa, “rather than trying to whip out our CF-18s and show them how big they are?”

Being in the newsroom during this attack and sitting next to their top researcher meant I was getting information as it happened. Within minutes of the shooting, we heard the gunman was wearing a scarf that looked Arabic. Through Twitter we saw a picture of the soldier who was shot. A Sun reporter informed me the soldiers have real guns but there are no bullets in them. The symbolism is overwhelming and that’s exactly what ISIS was going for. By the time the police held their press conference that afternoon, the tiny morsels of information they doled out were already ancient news. They talked about things they didn”t know, whereas we had known them for hours already. We got platitudes about the victim’s family, and once again, the focus was on not being mean.

“The Ottawa Police Service has a long-standing collaboration with our various faith and community leaders that has allowed us to build strong and positive relationships,” they told us at the press conference. “With this in mind, I want to take this opportunity to reiterate my commitment to ensure the safety of all our communities.”

Why is the focus on the possibility of Islamophobia? “We have real examples of Westernophobia,” I said on the Sun News show Byline. Just when you thought the reaction couldn”t get weaker, the Toronto Police Service chimed in with: “Although the news is still unclear as to who the perpetrators(s) is/are, some members of the community may link this attack to Islamic Extremists. We at Toronto Police Service have not made that link. I am asking you to relay to your mosques and their Imams, that we as a Service, are aware that your mosques may be vulnerable to a backlash.”