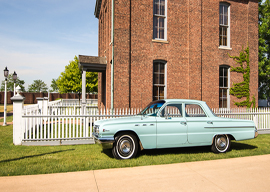 I went to see Charles Murray do a talk at Columbia last Thursday entitled “Are Elites to Blame for the Rise of Donald Trump?” This was a hot-ticket item as he had just been violently shut down at Middlebury College by students holding signs that said “No Eugenics” and “Expect Resistance.” They were likely objecting to Murray and Richard Herrnstein’s 1994 book, The Bell Curve, which dared to glance at the unthinkable subject of race and IQ (it eventually gets covered after a long intro disavowing racism). During Murray’s escape from the Vermont school, students hurled a cement sign at his car, and Allison Stanger, a professor escorting him, was hospitalized.

When I showed up at Columbia, students were carrying signs that said “White Supremacy Is Terrorism” and blocking the back door while chanting, “No War, No KKK, No Trump USA” in the same monotone used by those zombies who were chanting, “He Will Not Divide Us.” They weren”t very intimidating, but I didn”t feel like getting pepper-sprayed again so I employed an age-old trick I highly recommend: I hobbled toward the door like a severely handicapped person with contorted arms and a cerebral-palsy limp. This gait makes liberals turn away in horror because they ultimately abhor the weak. I walked through the crowd as though I was invisible and comfortably made my way to the talk.

“Watching a modern campus struggle with free speech in 2017 is downright Iranian.”

Watching a modern campus struggle with free speech in 2017 is downright Iranian. Before Murray could be brought in through the secret entrance, a Lebanese student walked into the roped-off podium and prepared our brains for the dangerous words we were about to hear. He told us free speech is important and it has nothing to do with the speaker (why not?). It’s ultimately about our freedom to listen to ideas. He implied that Murray’s writings were pseudoscience and had been debunked and then made it very clear he wouldn”t be listening to any of it and that we should try to be as skeptical as he is. Then he nervously marched off. How can someone refuse to attend a Q&A yet also define themselves as a person “inclined to ask questions“?

Murray’s talk was brilliant, as usual. The students who refuse to hear him speak will never know the incredible ideas he has meticulously researched in the half-dozen books he’s published since The Bell Curve. The first time I heard about libertarianism was in 1996’s What It Means to Be a Libertarian. In Coming Apart: The State of White America, 1960″2010, he focuses on the growing classism in this country and how important it is to get back in touch with America’s working poor. He says our disdain for Budweiser and Transformer movies is dangerous snobbery. I think he uses “white America” to avoid allegations of racism in a book devoted to criticizing Americans, but when students today see “white,” the word “power” magically appears next to it. The next book, We the People: Rebuilding Liberty Without Permission, goes from criticism to constructive ideas to rebuild this country. He suggests a Madison Fund where donors help the little guy fight back against odious political bylaws and fines. It’s punk rock. Even throwaway books such as The Curmudgeon’s Guide to Getting Ahead provide invaluable information to help improve your life. I”ve bought the book many times and give it to every millennial who seems serious about improving his lot.

However, with the introduction of Trump, I felt like my literary hero and I were finally coming apart. He was starting to sound less like a man of the people and more like one of the snobs he preaches to. I wasn”t the only one who felt this way. In Ann Coulter’s In Trump We Trust she said, “Conservative intellectuals reacted to Trump’s candidacy with a kind of sick horror. Among the most embarrassing objections came from the once-respected Charles Murray….” And later, “In a strange tirade, he announced that he was not voting for the GOP nominee”who was not better than Hillary!”because Trump had misstated something about the imperatives of Common Core. It’s WERE not “was,” you ignoramus.

Murray’s talk sounded like an accidental campaign speech for Trump. He talked about growing up in Iowa where the CEO of Maytag lived down the street from a factory worker and they all had the same car. “They could afford a Cadillac, but nobody would go higher than a Buick,” he said. He added that his experience was not unique and even the Upper West Side of Manhattan had a wide variety of household incomes. It sounded like utopia, but it also sounded like what Trump says when he insists we “Make America Great Again.” Trump may have grown up rich and he may have had many wives, but he poured cement with the builders his father hired and he has a great relationship with his kids. This makes him a blue-collar family man to many blue-collar family men. America is a country where the poor vote Republican because they see themselves as “temporarily embarrassed millionaires.” I see him as Rodney Dangerfield in Caddyshack and half his appeal is how uncomfortable he makes the old-money establishment. This is what Murray has been talking about his entire career. Even The Bell Curve is #MAGA. It wasn”t about race and IQ. It was about getting over IQ and seeing it as a genetic trait, like being an albino or something. So you”re smart. Big deal. When Murray was young, these people were called “pencil-necked geeks.” If we could get over this bullshit need for higher education, men could have pride in trades again. Sounds pretty Great to me.