Christmas in an Anti-Christian Age 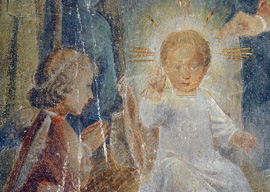 For two millennia, the birth of Christ has been seen as the greatest event in world history. The moment Jesus was born in a stable in Bethlehem, God became man, and eternal salvation became possible.

This date has been the separation point of mankind’s time on earth, with B.C. designating the era before Christ, and A.D., anno domino, in the Year of the Lord, the years after. And how stands Christianity today?

“Christianity is in danger of being wiped out in its biblical heartlands,” says the British think tank Civitas.

In Iraq, Syria, Egypt, Ethiopia and Nigeria, Christians face persecution and pogroms. In Saudi Arabia and Afghanistan, conversion is a capital offense. In a century, two-thirds of all the Christians have vanished from the Islamic world.

In China, Christianity is seen as a subversive ideology of the West to undermine the regime.

In Europe, a century ago, British and German soldiers came out of the trenches to meet in no-man’s land to sing Christmas carols and exchange gifts. It did not happen in 1915, or ever again.

“Atheism requires a belief in the unbelievable.”

In the century since, all the Western empires have vanished. All of their armies and navies have melted away. All have lost their Christian faith. All have seen their birthrates plummet. All their nations are aging, shrinking and dying, and all are witnessing invasions from formerly subject peoples and lands.

In America, too, the decline of Christianity proceeds.

The systematic purging of Christian teachings and symbols from our public schools and public square has produced a growing population—20 percent of the nation, 30 percent of the young—who answer “none” when asked about their religious beliefs and affiliations.

In the lead essay in the Book Review of Sunday’s New York Times, Paul Elie writes of our “post-Christian” fiction, where writers with “Christian convictions” like Walker Percy and Flannery O’Connor are a lost tribe.

“Where has the novel of belief gone?” he asks.

Americans understand why Mao’s atheist heirs who have lost their Marxist-Leninist faith and militants Islamists fear and detest the rival belief system of Christianity. But do they understand the animus that lies behind the assault on their faith here at home?

In a recent issue of New Oxford Review, Andrew Seddon (“The New Atheism: All the Rage”) describes a “Reason Rally” in Washington, D.C., a “coming out” event sponsored by atheist groups. Among the speakers was Oxford biologist Richard Dawkins, author of “The God Delusion,” who claims that “faith is an evil precisely because it requires no justification and brooks no argument.”

Christians have been infected by a “God virus,” says Dawkins. They are no longer rational beings. Atheists should treat them with derisory contempt. “Mock Them!” Dawkins shouted. “Ridicule them! In public!”