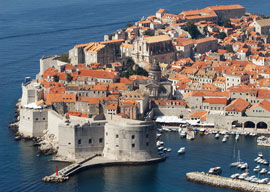 Croatia is responsible for the launch and execution of the largest military operation witnessed on European soil since World War II. But without Serbia’s late Slobodan Milosevic committing aggression against her and setting up concentration camps for Croats and other non-Serbs, she has a hard time hitting the front pages.

Since the end of the “Balkan Wars” in the 90s, Croatia has fallen off the radar and fails to capture the attention of editors around the world. An exception is The New York Times, which has a special appreciation for all things Croatian and “Fascist.”

Since the nationalist Franjo Tudjman’s death in ‘99, Croatia has been the paragon of all things “revolutionary.”

The 1990s saw the violent dissolution of communist Yugoslavia, but they did not see the defeat of the communist ruling class that thrives in the small nation of Croatia to this day.

While Syria awaits its obliteration and Miley Cyrus captivates the minds of countless Americans, the newest EU member, Croatia, finds itself in a historic struggle with Aunt Angela Merkel”now dubbed by Croatian dissidents and patriots as the heroine of our time.

“The 1990s saw the violent dissolution of communist Yugoslavia, but they did not see the defeat of the communist ruling class that thrives in the small nation of Croatia to this day.”

During the 00’s, communist Croatian chameleons bent over backward to satisfy every whim of Europe’s ruling elite in hopes of gaining accession to the EU. Croatian patriotic defenders dating from Croatia’s war for independence were discarded, extradited, and tried at the International Crimes Tribunal for the former Yugoslavia in The Hague. Some of them have been acquitted. Croatian state secrets were sold and put on display for all of Britain’s Channel 4 audience to see. Croatia’s communist government willfully handed over Croatian patriots to international tribunals, but it now refuses to hand over its own ancestral spies and executioners.

All of this was perpetrated by the communist ruling class that quickly dismantled “nationalism” in Croatia after Tudjman’s death.

The Titoists didn’t stop there. The “reformed” and recycled communist elite has sold every vestige of Croatia’s industry and tourism to foreign vultures. Croatia, having fought a war of independence, raked up foreign debt of only $7 billion under Tudjman’s patriotic government, but now it owes $70 billion in peacetime thanks to Titoists.

Croatia’s defeated Serbs have not only been let back in, they enjoy privileged status in the most politically correct nation in the world”Croatia.

After having fought a victorious war of secession from Serb-dominated Yugoslavia, Croatia now has a PM”Zoran Milanovic”who likes to quell interethnic and interregional conflicts by asking: “Just who is a Croat? And what does it mean to be a Croat?” This thug leads the nation that only two decades ago lost an estimated 15,000 lives in a successful battle of independence.

Conspiracy theories about Obama’s heritage abound in the US and around the world, and his allegiance to US sovereignty is questioned daily, but one could not imagine Mr. Obama negating the very essence of the nation he leads. In Croatia, that kind of rhetoric is ordinary. And Croats have been all but disenfranchised.

Germany, up against traditional foes Britain and France, played the most pivotal role in the international recognition of Croatia in 1992, and it is only fitting and logical that Allemagne is now leading the purge”the cleansing”of all things communist in Croatia, even if it requires blackmail.

Tito’s secret police thugs murdered 68 Croats on the territory of West Germany (and elsewhere) between 1945 and 1989. Yes, the Yugoslav secret police, popularly known as UDBA, murdered Croatian political dissidents on foreign territory. Not even the KGB ventured outside its state borders to murder its political opponents as frequently as the Yugoslav secret police did. Yet Tito is hailed in Croatia to this very day. They shot Romania’s Ceausescu by firing squad in Bucharest while Croatia’s commies, thanks to Serbian aggression, got a free pass. Staring at annihilation from Milosevic’s war machine, practically all Croatia’s communists turned faux nationalist overnight. The harrowing circumstances afforded them a free pass for sucking up to Belgrade for 50 years.