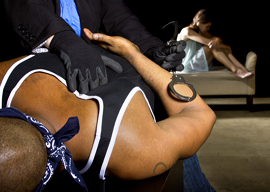 When I was a child, one of the many life lessons my parents taught me is that it’s easy to complain, but if possible, one should strive to be constructive and add something positive to a situation beyond merely pointing out what’s wrong. No one likes a negative nudnik (funny enough, Negative Nudnik was the original title of Elie Wiesel’s Night). Last week I complained about the fact that the U.S. Department of Justice flatly refuses to release detailed interracial rape statistics. I am, on principle, against withholding data. And I’m especially against a government agency withholding data from the public in order to please the social justice mavens on the left.

But still, in the end, all I was doing was bitching about something that isn’t there. I was shouting at a hole for being hollow, which is rarely productive.

So this week, as a supplement of sorts to last week’s column, I want to be a bit more constructive and analyze an academic study that, while a little old, is nevertheless the best (and perhaps last) scholarly examination of exactly the kind of thing the DOJ doesn’t want us to be able to study today.

“The Racial Patterning of Rape” could not be published in “the current year.” Not just because the required statistics are unavailable, but also because, in a time when even the suggestion that students should be free to choose their own Halloween costumes can get respected academics fired by angry black mobs from our most prestigious college campuses, no university-affiliated journal would ever allow such a tome to see the light of day (unless the entire editorial board was itching to find new jobs). “The Racial Patterning of Rape” appeared in the September 1990 edition of Social Forces, the quarterly, peer-reviewed academic journal of social science published by Oxford University Press in association with the Department of Sociology at the University of North Carolina, Chapel Hill.

“There is absolutely no way this report could be produced today.”

Now, I would not use a 1990 study if I were writing a piece on iPhone vs. Android users. But regarding rapists and their motivations, I think human nature has remained unfluctuating enough over the past 28 years to justify the continued relevance of such a study. We’re still pretty much the same animal, with the same flaws, desires, and hatreds.

Using records going back several decades, Felson and South (henceforth F&S) examined DOJ data for 1,396 U.S. male-on-female rapes. They begin their report with an admission that’ll likely produce seizures in today’s teat-suckling millennials: They’re not trying to see if black men rape white women to a greater degree than white men rape black women. They admit going in that it’s simply a statistical fact that black-on-white rape is more common than the converse. You could not make such an admission today. But F&S boldly proclaim that unpleasant truth right off the bat. In fact, they point out that of those 1,396 rapes, only twenty—yes, twenty—involved a white offender and black victim. That’s 1.4 percent. As a result, the study is not a “do they” but a “why do they.” What’s the reason for, as they put it, “blacks’ proclivity to rape whites”?

F&S compare the raw data to the prevailing theories regarding black-on-white rape, and the theories come up lacking. Is it a matter of poverty? This is known as the “deprivation” theory. Do blacks who feel especially “marginalized” and “trapped in poverty” rape white women at a greater rate than middle-class blacks? Does it all come down to feelings of anger at being “kept down by the man”? Nope. Not at all. The stats show that economic condition is not an indicator. F&S quickly jettison the “poverty” theory.

Next, F&S test out the “sexual access” theory. According to the proponents of that school of thought, black-on-white rape occurs because blacks, due to segregation, don’t have legitimate opportunities to socialize with white women. Deprived of normal channels of mixing, and watching white women from afar on TV and in movies, blacks begin to see white chicks not only as unattainable, but as forbidden fruit. This mixture of anger, desire, and a feeling of being “shut out” of normal human contact with white women leads to a compulsion to “steal” relations with white women via rape.

But guess what? F&S discover that in fact segregation is not a factor. Indeed, black-on-white rape is actually more likely to occur in cities in which integration is strong and the interracial marriage rate is high (i.e., “tolerant” cities). “Low levels of segregation are associated with high levels of black-on-white rape,” F&S write. The more that blacks mix with white women, the rapier they get.

We find little support for the hypotheses, derived from conflict theory, that interracial rape reflects black economic deprivation and politicalization. Interracial, as opposed to intraracial, rapes were no more frequent in cities with high black poverty, unemployment, or racial inequality. Nor does interracial rape appear to result from blacks’ limited sexual access to white women; we do not find the expected relationship between a city’s interracial marriage rate and the racial composition of rape.

In one fell swoop, F&S debunked two theories that the left has been pushing for decades as solutions to black crime: “end poverty” and “more mixing!”

As if I need to say it again, there is absolutely no way this report could be produced today. It also begins to become clear, the more you read it, why the deep staters at the DOJ don’t want researchers to have access to the same stats F&S saw. What’s at stake here is more than just hurt feelings on the part of blacks; there’s an agenda at risk.

And here’s where their cogent analysis goes all Elmer Fudd. They fail to take into account several factors regarding blacks who plan a robbery only to decide during the course of it to commit rape. One factor is level of comfort. If you decide to turn your simple robbery into a rape, chances are you’re in a place where you feel comfortable doing so. Therefore, it just makes sense that this type of rape would be more prevalent in neighborhoods where blacks feel the most comfortable (i.e., their own). If you’re robbing a fancy house that may have a silent alarm and neighbors who notice noise, or if you’re robbing someone in a Beverly Hills parking garage, you may not exactly feel like taking your time with the task.

Moreover, I’d want to know the age of the women being robbed. Growing up going to majority-black schools, there was a belief expressed by many of my school chums that old white people are misers who stash money and jewels in their home. If blacks disproportionately target elderly whites for robberies, well of course that would influence spur-of-the-moment rapes. Elder-rape is a fetish. Lord knows there are lots of pervs (of all races) who have it, but it’s a fetish. If you don’t have it, you’re not likely to rape a 90-year-old just because she’s there. If a good portion of white female robbery victims are older, that may explain the difference in rape stats.

When discussing the profile of the average white victim of black stranger-rape, F&S state:

We found that among white victims education increases the probability of being raped by black offenders rather than white offenders. The interaction model anticipated this effect on the assumption that more educated white women hold more liberal racial attitudes and thus interact more frequently with black men. However, education was found to be a stronger predictor of the racial composition of stranger rape than nonstranger rape; the social interaction model, with its emphasis on rapes among acquaintances, would have predicted the reverse.

Educated white women are more likely to be victims of black rape, but not because they’re necessarily more liberal and thus more likely to mix with blacks. These women are more frequently the targets of blacks who are complete strangers. F&S kinda leave that thread hanging, offering no real hypothesis for the anomaly. Could it be that the sight of well-put-together, successful white women triggers something in black males? A hostility that transcends the offenders’ economic status or level of inclusion/exclusion from white society?

That sure would be a neat trail to follow. And it’s certainly high time for someone to pick up where Felson and South left off. You know what? I might just do that myself! Yeah, that’s the ticket. I think I’ll work on an updated version of their analysis. Now all I gotta do is contact the DOJ to get the current data and…

Well, it was a nice dream while it lasted.

Maybe someday social scientists and statisticians will demand that the government make the raw data regarding interracial rapes available to the public. And maybe our esteemed academics will stop cowering before the social justice thugs and demand free inquiry on matters of public safety.

Yeah, that’s another lesson my parents taught me…always go out on a laugh.