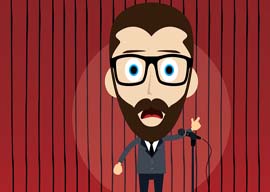 Comedians hate Donald Trump with so much vitriol, it looks like they”re siding with Bernie purely out of spite. Obviously both sides have their supporters and it’s not unusual for someone in the arts to go left, but this is different. They don”t simply disagree with Trump. They despise everything about him with a passion. They hate his socks. If he touched their arm, they would scald the spot with steam and then peel off the scab and burn it. I hang out with comedians a lot because I was cursed with an abnormally large sense of humor so they”re some of the only people I can relate to. Sarah Silverman, Patton Oswalt, David Cross, Bob Odenkirk, and Norm Macdonald are all considered the shit among comedy snobs and they”d all like to take a shit on Trump’s entire family. Google virtually any comedian’s name with the word “Trump” and you”ll get “asshole.” They are so in the tank for anyone but The Donald, they can”t believe anyone they know would think otherwise. When I wear my Trump gear around them, they laugh and high-five me for being so ironic. (I love all the people named above and sincerely hope this article doesn”t burn any bridges.)

Sometimes I have to spoon-feed them my explanation and say, “It’s kind of like when you see Katy Perry wearing a dress that says “Hillary Is a Badass.” I”m like her but for Trump.” I”m aware that dressing like this in hipster Brooklyn is basically sporting a Klansman uniform, but I don”t care. They have trouble wrapping their minds around this because Trump is Hitler to them, literally. “The guy is Hitler,” Louis C.K. recently said in a formal statement that everyone I know treated like some kind of dictum from above. “And by that I mean that we are being Germany in the 30s.” Statements such as these prompted The Atlantic to ask, “Trump fans, shouldn”t you be worried that all these comedians are so ardently against your guy?” The Atlantic says comedians are antiestablishment so we should take their candidate choices seriously. If only they could see that Donald Trump is the most antiestablishment candidate we”ve ever had.

Their arguments against Trump are so irrational, they remind me of a woman bleeding out of her whatever. They call him an egomaniac and chastise him for appearing on SNL when nobody is more of an egomaniac than Obama and virtually every political candidate appears on SNL, even Steve Forbes. They say he wants all Muslims out and despises Mexicans even though they know that’s not true. They don”t have any arguments because this isn”t about facts. It’s about feelings and they feel Trump is a serious threat to their very existence. That’s really what’s going on here: Trump represents the traditional family, and modern comics”especially the alternative ones”have built their careers mocking exactly that.

Sure, he’s had a bunch of divorces and yes, there are plenty of comedians who are happily married with kids, but we”re talking about the culture here and in America’s eyes, Trump represents a good dad with great kids who wants to get back to when America was great, and comedians represent a reboot of everything traditional and that’s the nuclear family. Comedians are deeply scarred human beings who shudder at the very idea of a family. They”re not pro”gay marriage because they give a shit about two random homos who want to fuck everything that moves while pretending they live for matrimony. They”re pro”gay marriage because they”re anti-marriage because they”re anti-family because their childhood sucked.