Coming to America Only to Bitch About It 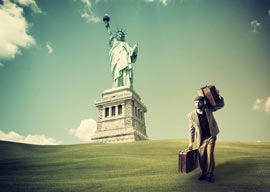 Why do so many immigrants come to America only to bitch about it?

Well, I mean, apart from the obvious answer, which is that conditions here are far better than they were in the hellholes they were fleeing, plus they get lots of free stuff and cuddles here.

What does it say about a person’s character that they move from a lousy country to come here, only to wind up endlessly wailing about how lousy this country is?

I”ve seen such behavior from African, Indian, Mexican, and Asian immigrants to America, and it only seems to be intensifying. What’s baffling is the fact that even though I”m supposed to be a rude insensitive xenophobic intolerant racist dick, it would never occur to me to move to Africa, India, Mexico, or Asia and act with anything beyond respect, gratitude, and even caution. I certainly wouldn”t start running my neck about how the culture of my new host nation sucks and how it needs to be tossed into the dustbin of history and how the majority needs to quickly become a minority or justice will never be served. I simply can”t find it within myself to be that much of an asshole. And I certainly wouldn’t expect my new hosts to tolerate five seconds of such behavior.

Yet many if not most native-born white Americans not only put up with this nonsense, they feel it’s their moral duty to be as obsequious, masochistic, and suicidal as possible. It doesn”t matter if their standard of living is noticeably worse than it was for their parents. Doesn”t matter if full-time jobs with benefits are harder to come by. Doesn”t matter if their country’s media and educational institutions insult them incessantly and openly gloat about their demographic extinction. You”re supposed to suck it up and smile while they”re laughing and kicking you in the teeth, or else you’re a bad person.

“The main difference between the recent swell of immigration to America and all previous waves is the open hostility to the very idea of the USA.”

Against all logic, we are also instructed to swallow the two-wrongs-make-a-right fallacy. You see, it was wrong when the evil white Christian conquerors came and introduced technology and longevity to the Americas. It was wrong when they imposed their language and religion and customs on those whom they subjugated. But somehow, now that this is all happening to the evil whites, it isn”t wrong at all. It’s justice. It’s payback. It is by no means to be viewed as soft genocide and aggressively arrogant cultural colonialism. And none of the sweepingly negative statements about whites and their culture are “racist””in fact, it’s even racist to note the double standard.

Truth be told: If any of these invaders”and that’s what many of them are, because never has a majority of native-born Americans been in favor of unfettered immigration”truly thought this country was so brutally racist, they”d be afraid to so much as open their mouths. Rather, they smell blood. If you really fear someone, you aren”t constantly maligning them. Instead, they sense palpable weakness, and they”re dogpiling on top it.

When those who oppose European colonialism”and if you”ll notice, that’s the only type of imperialism they ever oppose”mewl about how “indigenous” cultures ruled their homelands for millennia, my natural gut response is, “Well, even though they had all that time to prepare for an invasion, they did a piss-poor job of defending this land that you insist they ‘owned.’”

And, sadly, that’s the truth about America’s white majority. At least the Cherokee put up a fight. Many white Americans, duped by a warped sense that they should feel guilty merely for existing, are pretty much giving the country away.

This baffling phenomenon of immigrant-as-ingrate was beautifully illustrated recently in the person of one Matthew Guevara, who is probably not related to Che Guevara but may as well be. Matthew is not technically an immigrant since it was his parents who came here from Mexico, but he shows the ingratitude in spades, even though he’s not technically a spade. A student at UC Irvine, Guevara recently helped pass a petition that banned the American flag from the student government’s lobby under the pretense that the flag constituted “hate speech.” The flag-banning resolution, which he wrote and helped pass but was later vetoed, read in part:

Flags construct paradigms of conformity and sets homogenized standards for others to obtain which in this country typically are idolized as freedom, equality, and democracy…freedom of speech, in a space that aims to be as inclusive as possible can be interpreted as hate speech.

No, Matthew, you don”t sound like a brainwashed parrot at all!

Ami Horowitz, who’s described as a “political satirist,” recently got Guevara to tie himself in knots with his own tongue. She got him to say that in order to be inclusive, “sometimes you have to exclude things.” Guevara said that the world’s most evil entity is the USA, but still somehow his parents were hornswoggled into coming here to find “a better life.”