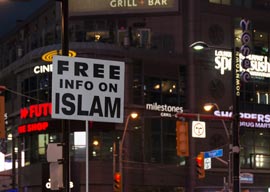 While no superpower threatens America today like the Soviet Union did in the past, a new enemy does threaten us”Islamic jihad. Consequently, an American foreign policy must be shaped to respond. There are two basic conservative approaches:

Neoconservatives see Islam as a powerful force intending to rule the world via terrorism, immigration, and religious proselytization. Because of its aversion to individual freedom and its anti-reason theology, Islam is a formidable threat to America that requires the militarization of our society, centralized bureaucratism, and the establishment of American hegemony in the Mideast to tame its countries” hostility.

Libertarian-conservatives agree that the intent of Islam is to eventually take over the world via terrorism, immigration, and religious proselytization. But we don”t agree with the neoconservative strategy of aggressive confrontation with Islamic nations in the Mideast. This violates a cardinal rule of war: Don”t get bogged down in guerrilla wars in the guerrillas” home territory unless you are prepared to become a permanent occupation force that is willing to govern such a territory as a colony.

We must understand the real danger of Islamic jihad. It is built on (1) the horrific use of terrorism against the West, and (2) the migration of Muslims to the West to peacefully infiltrate its cultures and convert them via rapid breeding and metaphysical proselytization. Modern-day jihad is extremely long-term in its view.

“The decision has been made in many cases to avoid conflict by allowing semiautonomous Islamic regions within host countries. PC liberalism is running amok.”

But Islamic jihad represents no conventional military threat to us (armies, tanks, etc.). We need to take a lesson, however, from Europe’s present problem with Islam. European countries allow millions of Muslim immigrants yearly and are not maintaining their own populations at replacement levels. In the face of Islam’s exploding population, this portends badly for Europe’s future because of the religious mandates imposed upon Muslims by the Koran and Muhammad regarding migration to the West to establish Trojan-horse communities based on Sharia law rather than the host country’s legal structure.

Most Crucial of Perimeters

Thus, to effectively confront the danger of Islamic jihad we need to start defending that most crucial of perimeters”our national borders. Return to the pre-1965 immigration accords as Peter Brimelow and Alien Nation call for. Then set an example to the world by building a free country here at home.

Islam’s evil is that it rejects reason and condones violence against unbelievers, but like all religions, it is not monolithic. It comprises various sects, and only a small minority of radical Islamic intellectuals advocate violent means to advance Islam, i.e., terrorism. But all Islamic intellectuals do advocate Hijra, the “Doctrine of Immigration,” or the peaceful means of advancing the Islamic political state to subvert Western societies.

Hijra is something that Europe has not paid adequate attention to over the past several decades, and as a result is now encountering a growing contagion of Islamic communities based upon Sharia law. It is hard to believe that Western nations would capitulate to foreign communities living within their borders and allow them to structure their own courts and laws; but it is happening in Europe and England.

“So one can see,” said Dutch politician Geert Wilders, “that the threat from Islam doesn”t just come in the form of Islamic terrorism by suicide bombers trying to wreak havoc in our cities…. It [also] comes in the form of a gradual and incremental transformation of our societies and legal systems, or what is termed “Islamization” of our democratic societies by the vast growing numbers of Muslim immigrants who are importing Islam into our Western way of life.” [Speech at Columbia University, Oct. 21, 2009]

This is being done presently in Europe by creating “no-go zones” governed by Sharia law. The decision has been made in many cases to avoid conflict by allowing semiautonomous Islamic regions within host countries. PC liberalism is running amok.

Is Hijra then a danger to Western countries? Could Muslims actually construct enough Sharia communities in Europe and America to one day be able to undermine Western law and culture? No, at least not in America. But the real danger of Hijra lies not in its peaceful conquest. It lies in its ability to be deceptively used as a cover by terrorists to sneak into host countries. Here lies a lethal threat, and we need to confront it.