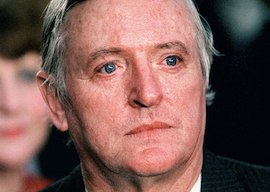 “The world is what it is; men who are nothing, who allow themselves to become nothing, have no place in it.” —V.S. Naipaul

People need enemies and scapegoats. People need someone or something to hate. For there is meaning and vitality in hating. There is, above all, unity, especially in politics, defined as it is by conflicts and group interests.

We learned this dark lesson this week. We saw the usual conservative moral prostitutes rush to condemn a group of innocent young Christian men. Students at Covington Catholic High School in Park Hills, Kentucky, they attended a pro-life rally at the Lincoln Memorial in D.C. last Saturday. Also present was a group of Native Americans, for like everyone these days, they too have grievances to express and rights to affirm. At one point a man named Nathan Phillips decided to walk up to Nick Sandmann, a member of the pro-life group, and bang a drum and sing in his face. Phillips is 64. Sandmann is 16. But Phillips’ behavior would have been extremely stupid even if he weren’t much older than the teenager. What was the meaning of the drumming and singing? What was it supposed to accomplish? Did Sandmann, as a young white man wearing a MAGA hat at a pro-life rally, embody such evils as Phillips sees fit to protest?

The answer, of course, is no. Yet as Jonathan Swift said, man is not a rational animal, but an animal that is capable of rationality. So it happened that many people, upon seeing brief footage of a white teenager smiling at an old Native American man while a group of boys, also wearing MAGA hats, looked on from behind the two men, assumed Sandmann and his schoolmates were looking for trouble. In their white privilege, they chose to pick on and ridicule Phillips, who, having dark skin, was oppressed by definition.

More detailed footage soon revealed all this to be nonsense. The boys, indeed, had done nothing wrong, and it was Phillips who was the agitator, though the plainly idiotic and dishonest man has put a benevolent-sounding spin on his conduct. (We also know now that Phillips is not, as he had claimed to be, a Vietnam veteran.) Sandmann and the other boys have been objects of hatred in both the media and on social media. Some have received death threats. And with that reflexive gutlessness that marks Christianity in our time, their school issued an apology. So did the Diocese of Covington.

It has been quite revealing to see how much hatred there is for white people in America, and what little it takes for it to come forth. Events, however, are essentially occasions for the assertion and expression of human character. Thus, if you know what people value and believe, you can have a pretty good sense of how they will perceive and judge phenomena in general. It is remarkable how predictable people are in this respect. Last October, in a piece for FrontPage Magazine on the massive bias against Brett Kavanaugh, I wrote:

The countless partisans who insist that we “believe her” regardless of the facts and the need for due process, are doing so because for them such belief is a value independent of Ford and the facts in question: it derives from what the people themselves are; and however unconsciously, the internal value is the perspective whereby the external phenomenon is perceived, evaluated, and judged.

“Will there once again be a serious and politically influential intellectual right in America?”

To say it a different way: a priori paternalism toward women is the premise from which people unconsciously reached the conclusion that, because Ford must be protected, Kavanaugh must be guilty.

It is this same value-laden perspectivism that has allowed so many people to make the Kavanaugh-Ford controversy a matter of race, or rather, of “white supremacy.” For while very few people can think well, everyone can evaluate, and it is quite natural for people to treat events as occasions for expressing what they already value and believe.

Reason, then, is a limited thing. It is only so effective. In politics, as in life generally, the most important thing by far is Will. Do enough Americans have the Will to resist the racism against whites that frequently passes for virtue in our time? Or will whites remain the scapegoats of multicultural America until, this enemy group having been dispossessed and defeated, the intersectional coalition turns on each other?

Will there once again be a serious and politically influential intellectual right in America? Here it is at least a good sign that more people are realizing what utter frauds are Rich Lowry, David French, Jonah Goldberg, Max Boot, and the like moral prostitutes in what my friend Jack Kerwick calls “the Big Con.” Such spineless hacks are only too happy to yield to the left and to play by its terms for lucre’s sake. After all, their donor base is fundamentally left-wing.

Hence the National Review article “The Covington Students Might as Well Have Just Spit on the Cross,” written by Nicholas Frankovich and published at 2:55 a.m. on Sunday at the magazine’s website. The Covington boys, according to Frankovich, “mock a serious, frail-looking older man and gloat in their momentary role as Roman soldiers to his Christ. ‘Bullying’ is a worn-out word and doesn’t convey the full extent of the evil on display here.” His hysterical enthusiasm increasing, Frankovich continues:

For some of us, the gospel stories of Jesus’s passion and death are so familiar we no longer hear them. The evangelists are terse in their descriptions of the humiliations heaped on Jesus in the final hours before his crucifixion, the consummate humiliation. Read the accounts again or, if you’d rather not, watch the video. The human capacity for sadism is too great.

Unhappily, Frankovich failed to work in a Hitler reference for his fellow good team members. Nevertheless, the business-rabble for whom National Review is a handy tax write-off were doubtless much pleased by these words. Time is money, and if you’re too ambitious and goal-oriented to read “the gospel stories of Jesus’s passion and death,” you can still learn all about the “human capacity for sadism” by watching the video of Phillips and Sandmann, the latter being the moral equivalent to the Romans who crucified Jesus.

Frankovich describes Sandmann as “the boy who makes himself the co-star of the video by stepping forward and getting in Phillips’s face.” And yet, the video footage that was available at the time didn’t show that Sandmann had stepped forward and gotten in Phillips’ face. Frankovich just assumed that that’s what happened, and it is very revealing that he would do so. Of course, later footage showed that Frankovich’s description was false, Phillips having been the agitator.

Frankovich accuses the Covington boys of putting their pro-life position in the service of partisan politics, “as if the abortion debate were a Yankees–Red Sox game.” Ironically, it’s Frankovich himself who was profoundly biased. The man ends his sermon with this sentence: “As for the putatively Catholic students from Covington, they might as well have just spit on the cross and got it over with.” Thoughtful young believers will perhaps learn a lesson from this: They should not trust their elders in the faith, because most are too weak and compromised to protect them.

National Review silently removed Frankovich’s article on the same day it was published. Then, with shameless hypocrisy, the magazine began publishing articles taking the media to task for its coverage of the Covington boys. To his credit, Frankovich has apologized for his atrocious article. But his destructive moralizing is just one instance of a general practice on the right. Time after time, the same group of conservative moral prostitutes say basically the same things on the same issues. They are so predictable that all I have to do is see the titles of certain articles on the magazine websites or on Twitter. Reading these titles, I think of the usual names: Shapiro, French, Podhoretz, Rothman, Lowry, Kristol. And more often than not, I am right. Clicking on the articles, I encounter the usual (fundamentally left-wing) cant and hysteria by the same contemptible asses.

This corruption, it should be known, has been a problem on the right for decades. Often I hear people say, about the recent steep decline of National Review, “William F. Buckley Jr. would be rolling in his grave.” Such persons evidently do not know that the magazine’s founder was himself a conformist, purging various heretics from his publication over the years. On charges of “anti-Semitism,” Buckley was so compliant that he might have been taken for an employee of the Anti-Defamation League. Although his fusionism made sense as an alliance against communism, it proved to be a disaster in the long run, from which the right is still trying to recover. It is a fair question just how conservative Buckley really was from the 1970s on. This is a man, let’s remember, who was highly critical of Pat Buchanan’s “protectionism, nativism and isolationism”—as if these positions were not eminently conservative! —as well as his alleged “anti-Semitism.” This was back in 1991, when Buchanan was emerging as the front-runner for the Republican Party’s presidential nominee. Taking up nearly an entire issue of National Review, Buckley’s very public criticism hardly helped Buchanan’s prospects. Though Buckley endorsed Buchanan in the 1992 Republican primaries against George H.W. Bush, he had already done him considerable harm. And that was quite unfortunate, because unlike the two dreadful Bush presidents, and unlike the current president, Pat Buchanan has the mind of a conservative statesman.

At the beginning of this column I spoke of the human need for hatred. To be clear, it is not the case that this need exists in all people; but considering human history, and how politics and moral systems work, hatred does seem to be an essential value for human groups. In the past few years, the media and the universities have shown us how much hatred there is for white people in America today, especially for white men. There is no sign that such hatred is going to diminish anytime soon. Rather, it seems likely that it shall continue to increase. For this reason, people who care about the future of this country, and the independent right in particular, should expose the conservative moral prostitutes for what they are. The last thing Americans need are enemies on the right. As with America’s fate and survival, opposing the conservative moral prostitutes is largely a matter of Will.