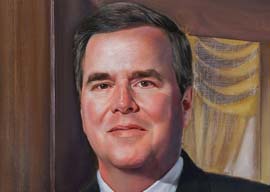 About three weeks ago I had already grown Officially Tired of Election 2016, so I imagine the next year and a half will be torture for me. If there is any real difference between Republicans and Democrats, it is only in the sense that there are different types of cancer.

The only official candidate for the Democrats so far is a white suspected lesbian and erstwhile Tammy Wynette impersonator who has a steely fanged vagina that at any moment threatens to chomp through her pantsuit and devour the world. Her target demographic, obviously, is chicks.

There are three officially declared Republican candidates at this point, all of them male. Rand Paul already made a slimy reacharound gesture to black leaders in Ferguson, MO last October. Then again, all of the Party of Lincoln’s recent overtures to black voters have been cringeworthy. There was the brief and disastrous tenure of Michael “Hip-Hop” Steele as Republican National Committee chairman, the failed 2012 presidential candidacy of philandering yam-nibbler Herman Cain, and the possible 2016 campaign of Dr. Ben Carson, who is phenotypically black but whose soul is whiter than all four members of ABBA combined.

“More than anything, Jeb Bush’s whole “Hispanic” thing seems like an odd sort of fetish.”

Besides Rand Paul, the other two official Republican candidates are both Hispanics, with Ted Cruz bearing the extra-special distinction of quite possibly being the only Hispanic ever born in Canada. Both Cruz and Marco Rubio are obviously handpicked, vacuum-sealed, and tailor-made to appeal to the 50-million-plus Hispanics who huddle within our borders, many of them legally.

And then there’s Jeb Bush, who only pretends he’s Hispanic.

The New York Times, bless its rapidly failing heart, recently revealed that on a 2009 Florida voter-registration form, Ol” Jeb listed himself as “Hispanic.” Bush recently claimed that it was all a mistake”which suggests that if he bungles a simple voter’s form, he may not quite be up to the task of navigating the Oval Office. But only Bush knows the truth of whether his 2009 “mistake” was intentional or not. Only he knows whether he was being accidentally Hispanic…or conveniently Latino.

(Brief but impassioned digression: The term “Hispanic” isn”t perfect when used to describe all those brown-skinned, Spanish-speaking diminutives from south of the American border, but it’s far superior to the entirely inaccurate “Latino.” There is absolutely nothing Latin about these people. They don”t speak Latin, and hardly any of them has ever set one toe in Italy. If you want to get extremely literal and borderline Aspergery about it, Frank Sinatra was more truly a “Latino” than Marco Rubio and Ted Cruz could ever hope to be.)

More than anything, Jeb Bush’s whole “Hispanic” thing seems like an odd sort of fetish. He is fluent in Spanish, is married to a Mexican woman, and has primarily lived in states that are stuffed like tightly packed burritos with Hispanics. Bush, who has yet to officially declare his candidacy, is using these credentials to reach out to the Hispanic population. Do not be surprised if you soon see pictures of him wearing a sombrero while kissing brown babies.

I can”t recall ever having the remotest hint of a positive feeling about any of the Bushes. I like my bushes on women, not in politics. And Jeb seems the most unremarkable of all the Bushes. If the Bush family were the Beach Boys, Jeb would be the fair-to-middlin” Carl Wilson. And like the Beach Boys, he is as white as a vanilla milkshake. He may be culturally Hispanic in many ways, but ethnically? No way, JosÃ©.

Bush is undeniably a white male. So why is he reaching out to Hispanics? Why not just reach out to white males?