Cracking Skulls for a Good Cause 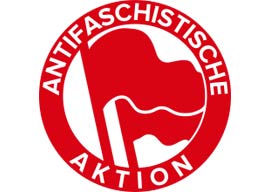 It takes an extreme level of ethical retardation to walk up to someone who is not threatening you, punch them in the face, and claim it’s in self-defense. But that’s exactly how the masked pussies of Antifa depict their street violence.

On June 29th during one of the endlessly inane street marches that occur in Portland, OR—a town which is still far whiter than the rest of the country and can’t seem to forgive itself for it—a short gay Asian writer named Andy Ngo was attacked by a horde of these overwhelmingly white “anti-racists” who hate their skin color so much they tend to cloak themselves entirely in black. As Ngo tells it:

“No hate! No fear!” chanted the left-wing crowd as they marched downtown Saturday. I walked to the front of the line to record the protesters with my new GoPro camera when I was suddenly slammed on the back of my head with something hard. Dazed and still hearing faint chants of “no hate,” I was then punched and kicked by perhaps a dozen masked people in black. At an Antifa event meant to resist “fascist violence,” I—a gay journalist of color—was beaten so badly that I was hospitalized for a brain hemorrhage….

His apparent crime was filming Antifa’s activities on the day in question as well as writing in the past about the fact that they are violent. In some sort of brain-damaged attempt to teach him a lesson that what he was doing was wrong, they proved everything he said about them was correct—and possibly gave him brain damage in the process.

After Ngo tweeted a picture of himself in the emergency room, several of these notoriously compassionate souls exulted in his pain:

You deserved this. Hopefully they’ll come for your family next

Oh princess! Someone get this guy a safe space!

A truly noble martyr to the cause of fascism

This has made my morning. God you dorks love playing the victim dontcha

Congratulations. You’ve achieved the martyrdom you’ve tried so hard to achieve, and all it took was some light bruising and a victimhood complex.

*shows up to antagonize people* Oh no someone hit me :(( guyyyyyyssssss

You incite violence. What did you expect to receive? For every action, there is an equal by opposite reaction

You got beat up like a bit*h son. Send me your ER bill, I ll pay it just to see you back on the street and bit*h slapped again.

Andy Ngo wasn’t the only alleged “fascist” to get a beatdown that day. As an elderly man was being maced and beaten bloody with a crowbar, a man who tried to intervene was also clobbered in the head, requiring 25 stitches and staples in his skull.

“It takes an extreme level of ethical retardation to walk up to someone who is not threatening you, punch them in the face, and claim it’s in self-defense.”

For all the blibber-blabber you hear about Donald Trump supposedly creating a dangerous climate that enables his supporters to attack journalists, I’m only aware of leftists attacking journalists these days. It’s happened again and again and again and again. In November 2018 a pack of rabid “anti-fascist” pink-‘n’-pierced poodles showed up at Tucker Carlson’s house and terrorized his wife, going so far as to crack open the front door of the family’s house.

If you followed the 2016 presidential campaign at all, you’d realize that the pattern was entirely one way: Leftists would show up at Trump rallies and cause havoc, while Trump supporters couldn’t be bothered to show up at Clinton and Sanders rallies.

Despite all this, the national press consistently ignores or downplays Antifa violence while either overblowing or entirely fabricating an imaginary wave of violent right-wing street thuggery. NBC News dared to feature a segment describing Antifa violence as “ethical.” That white-toothed fossil Joe Biden launched his freakin’ presidential campaign by calling Antifa “a courageous group of Americans.”

And in the wake of Ngo’s beating, Haaretz published a piece by a certain Stanislav Vysotsky called “Antifa in America: Militant Anti-fascism Isn’t Terrorism, It’s Self-defense” that was so audaciously blind to reality and the fact that “two wrongs make a right” is a fundamental logical fallacy, it likely made George Orwell’s corpse throw up a bit in his mouth:

Many militant anti-fascists become involved in this form of activism because aspects of their identity are directly targeted by fascist violence; they are queer, transgender, gender non-conforming, people of color, Jews, Muslims, Sikhs, and certainly identified in ways that intersected across these categories….For them, anti-fascism was a means of ensuring their safety from a movement that threatens their very existence and venerates violence as the highest form of action. Even the Antifa activists who identify as cis heterosexual white males are the targets of fascist violence as ‘race’ and ‘gender’ traitors.

The funny thing is that despite Haaretz’s fiction that Antifa is a diverse interactional rainbow, every set of Antifa mugshots I’ve seen suggests they are overwhelmingly white. If there is indeed a “rainbow” going on there, it only involves different hues of DayGlo hair dye. Forget the fact that even though I’ve rubbed elbows with many of these alleged “fascists” and “Nazis” for a generation and have never heard a single one of them talk about threatening anyone else’s “very existence”; instead, they are fixated on preserving their own existence.

Then again, hypocrisy and projection are defining features of the terminally moral. So is the willing suspension of reality.

Chief among the tricks these mentally inert activists play upon their own minds is the conflation of words with violence. Social Justice Kittens is a satirical calendar that’s been issued annually for the past few years that juxtaposes photos of adorable kitties with actual quotes from the social-justice crowd. Here’s the quote for the month of June 2019:

There is no such thing as “unprovoked violence” against a fascist! Any response is just varying levels of self-defense.

I will try to restrain myself from the temptation to mock them for at least this paragraph in an attempt to explain how this warped line of thinking goes. As far as I can tell, they presume the ability to read the minds of everyone who disagrees with them, and what they see is a boiling cesspool of hatred and murderous intent. If you are in any way opposed to the Cultural Marxist globohomo agenda, it is only because you seek the extermination of anyone who isn’t a straight white male or a white breeding sow. Your only possible reason for disagreeing with their unassailably righteous cause is because you are an evil subhuman who sees anyone who is unlike you as, well, an evil subhuman. Because they know your intentions much better than you do, any attempt you make to argue otherwise is merely a weak and dishonest deflection from the fact that you wish to foist several sequels of the Holocaust upon the world as if they were Rocky movies. Because they are able to gaze into their Social Justice Crystal Ball and discern what’s really going on, the very fact that you exist is a threat to their existence. It makes them feel unsafe. It is the equivalent of being attacked. It is literal violence. Therefore, when they smash you over the head with a crowbar, it is an act of self-defense. Yes, sure, usually it’s considered bad to smash someone over the head with a crowbar, but any guilt feelings they might have are absolved because they are hiding behind the shield of a good cause.

From my experience, totalitarians can’t conceive of anyone who isn’t a totalitarian. Due to their rhetoric and behavior instead of some arrogant presupposition that I can read their minds, it appears that an extraordinarily tidy little hyper-moralist loop seems to be constantly playing inside their heads:

Nazis are bad and want to kill anyone who’s not a Nazi. Therefore it’s good to kill Nazis. If you disagree with a word of what I say, you’re a Nazi who deserves to be murdered.

Therefore, they are able to feel good about committing acts that in most contexts would be considered evil.

And that’s what is sinister and slippery about the very idea of “good.” If people are convinced that their cause is good beyond question, they will find a way to justify whatever they do in its name, no matter how sick or violent. No cruelty is beyond the pale.

As the dot-headed poet Vikram Seth once said, “God save us from people who mean well.”