No Safe Space for the Wicked 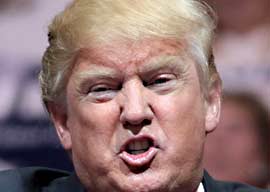 One of the most inane verbal constructions in the modern leftist lexicon”right up there with “rape culture,” “white privilege,” and “transphobia””is the idea that the piteous lambs who constantly squirm under Evil White Maledom’s pale, oppressive thumb require “safe spaces” wherein they can segregate themselves without fear of reprisal.

In a deeply personal way, I can relate. Ever since my father punched my mother in the stomach while she was pregnant with me, I suppose I’ve been a trifle touchy about having my personal space invaded.

A year or so ago right here in the typically safe confines of the Taki’s Mag comments, someone brilliantly summarized all of politics as a struggle between people who want to be left alone and people who won’t leave you the hell alone. I just want to be left alone, but that’s difficult in a world where collectivist zealots not only won’t leave you the hell alone, their blind belief that they are fighting the “good fight” makes them feel entitled not only to openly harass you, but to invade every aspect of your personal life until you’re jobless and homeless.

As with everything that hangs leftward these days, the progressives’ idea of a “safe space” is based on a rancid double standard. Just as nonwhites are deemed incapable of racism…and women cannot possibly be sexist…and gay people can’t possibly hate heterosexuals…there are to be absolutely no safe spaces for straight white males. Instead, every inch of their terrestrial and neurological territory is to be invaded, conquered, and occupied.

To my memory, the last time I can recall a large-scale white mob attacking leftists was during the Hard Hat Riots in Manhattan”and that was over 45 years ago.

Throughout most of my life, with the glaring exception of the eternally entertaining Westboro Baptist Church, the serial space-invaders have been overwhelmingly leftist. This trend has revved up considerably during the Obama years, as scaly-skinned billionaire George Soros has funneled untold levels of cash toward large-scale nihilistic leftist tantrums such as Occupy Wall Street and Black Lives Matter.

Last Friday night in Chicago, young black people stopped killing one another long enough to help shut down a Donald Trump rally. They were aided and abetted by nonwhite-identity groups such as La Raza Chicago and the Muslim Student Association, all of whom were egged on by Soros front organization MoveOn.org. Among the “diverse” gaggle of disruptors and free-speech snuffers were the usual crowd of smirking bearded white hipster pro-Sanders bobbleheads who are furious at Republicans for the fact that they’re having trouble paying back the $120K in loans they took out to get a master’s degree in Native American Bisexual Pottery.

I was alerted to the melee at 7:56PM Friday by a friend who lives in Chicago:

Un-fucking-believable !!! They just cancelled the Trump rally in Chicago because of all the marxist traitor scum protesting outside of the college !!! This city fucking blows cock !!! I’m moving to a better state ASAP

On reddit.com, a commenter who describes himself as “a foreigner and person of color” says he attended the Trump event from early in the afternoon to its eventual unspooling:

I feel that I experienced today, for the first time in my life, true totalitarianism and authoritarianism, expressed laterally from citizen to citizen, in order to silence opinions from being shared. This enforcement was shared through sheer numbers and intimidation, and in a few cases, violence.

As I’ve already noted after attending a Trump rally in Atlanta, the topic of race was not mentioned once during the entire event, yet nearly all of the bile tossed at Trump”at least the rhetoric that does not directly assail his hair and his penis”focuses exclusively on dubbing him as a “racist.” Pardon me for getting all paranoid and suspecting that his critics would prefer to stir fears about Trump being the New Hitler rather than ever mention his legitimate complaints about the nation’s toxic inflow of illegal immigrants and economically suicidal outsourcing of jobs and industry.

And as I watched the live footage unfolding of smirking, scruffy dupes of globalist totalitarian financiers swinging fists, screaming at cops, and harassing the fuck out of Trump supporters who were merely trying to leave the event peacefully without being jumped, I bit my lip as one CNN reporter after the next all blamed it on Trump.

They claimed that it was Trump’s words that led to the violence”not the conscious decisions of those who couldn’t emotionally handle his words and therefore made a conscious decision to attend his rally and “shut it down” while “fucking shit up.” When they threw bottles at cops and swung fists at Trump supporters, they were in no way responsible for their behavior. And by preventing Trump from speaking and letting him know he wasn’t welcome in Chicago and there should be no forum for people such as him to speak, they were only exercising their free speech, and you’re a stupid knuckle-dragging redneck if you don’t see the logic in that.

If the media is trying to start a race war, they”re doing a very good job of it.

The Great Chicago Trump Shutdown occurred after weeks of desperate turd-flinging against Trump by both major political parties and mainstream media across the political spectrum. And yet the same tools who insist that gullible fanatics can be easily whipped up into violence by mere rhetoric took not a wisp of responsibility for possibly triggering hordes of their special snowflakes with endless propaganda about how Donald Trump is the secret love child of Adolf Hitler and the KKK.

But who exactly are acting like the intrusive brownshirts in this equation? Which side is aggressively flouting all known rules of decorum and civility and is openly messing with the other side?