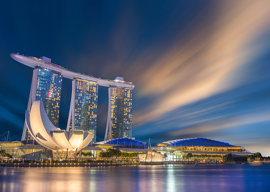 Moreover, while the film is pleasant, the jokes are barely funny enough to qualify it as a comedy, and the cast lacks star power. Crazy Rich Asians confirms stereotypes of the Chinese as materialistic and conformist.

On the other hand, this current trend of racial solidarity celebration movies, such as last winter’s Black Panther, tends to be inherently conservative.

One difference between the two movies, however: While Wakanda and Singapore are both right-wing authoritarian utopias, Singapore actually exists.

Singapore’s governance offers much to admire, but personally, I’m not a big fan of the place. In Singapore, it’s guys like me who get sued for defamation into financial ruin by the deep-pocketed politicians. Fortunately, having sat through the movie, I now feel that I must have seen everything expensive there is to see in Singapore, so I can economically scratch that destination off my foreign-travel bucket list.

“Crazy Rich Asians is less of a lampoon and more of a big gay racial pride parade extolling just how much money Singaporeans have to blow on impressing each other.”

As for diversity…it’s complicated. Singapore is multiethnic; besides the dominant Chinese, it has indigenous Malays and interloping Indians. The government imposes ethnic quotas on public housing projects to keep them integrated (while using immigration policy to import enough hustling mainlanders to maintain the Chinese majority, despite Singapore’s total fertility rate of only 1.16 babies per woman). Most of the movie’s dialogue is in English, the main language of business in Singapore.

But at the high end of society, to judge from this movie, wealthy Chinese prefer to socialize only with other wealthy Chinese. Why the movie is not entitled Crazy Rich Chinese is never explained. The only South Asians in Crazy Rich Asians’ version of Singapore are a few Sikh armed security guards who frighten the smooth-skinned Chinese with their barbaric beards.

The lone white characters are a couple of racist desk clerks at a fancy London hotel in a prelude set in 1995. They turn away the imperious Michelle Yeoh (of Crouching Tiger, Hidden Dragon) because who had ever heard of a rich Chinese person way back in 1995? (Wasn’t 1995 the year the British burned down China’s Summer Palace during the Opium Wars?) So, in a scene lifted from about a dozen similar movies, the dragon lady gets vengeance by buying the hotel and demoting the surprised clerks.

The message pounded home by Crazy Rich Asians is that it’s not 1995 anymore; everybody must learn that Asians are now crazy rich, so take that, you round-eyed tall-noses!

Judging from the title, I had assumed that this movie, based on fashion photographer Kevin Kwan’s roman à clef novel, would be an amusing satire on Chinese materialism. But Crazy Rich Asians is less of a lampoon and more of a big gay racial pride parade extolling just how much money Singaporeans have to blow on impressing each other.

I had first heard about the scale of these weddings from Singaporean girls at the UCLA M.B.A. program in 1981. We business school students weren’t the most ascetic of scholars, but receptions with 2,000 invited family and friends seemed a little much even by Reagan-era Bel-Air standards.

Since then, Singapore has prospered even more immensely, enabling its residents to pursue new extremes of getting and spending.

The ingenue, Rachel Chu, is an inexplicably unworldly NYU economics professor who has no clue that her handsome, devoted boyfriend is the most eligible bachelor in Asia as the scion of Singapore’s oldest real estate development empire.

She clashes with her potential tiger-mother-in-law, played by Yeoh. The elder woman has been more or less enslaved to her mother-in-law for decades, so she’s not about to let her eldest son fall for some silly girl economist with foolish American ideas about having her own career instead of becoming her servant.

Unfortunately, Constance Wu of the sitcom Fresh Off the Boat is dull as the heroine. Henry Golding is fine as her truehearted boyfriend, but his role as a Mr. Darcy without the brusque edge is forgettable.

As you may have guessed from his name, the leading man, who looks like a Eurasian version of Portuguese soccer star Cristiano Ronaldo, is half white. Granted, it’s been common for East Asian leading men, such as Bruce Lee and Yul Brynner, to be Eurasian, but casting a tall, whitish guy undermines the logic of the movie’s successful PR campaign about racial “representation.”

One character missing from the eight or ten wedding-related social events is the boyfriend’s father, who is said to be in China on business. My guess is that the producers hope to induce veteran movie star Keanu Reeves, a distinguished-looking Eurasian, to take that role in the sequel, which would be helpful in explaining why the leading man doesn’t look all that Asian.

Moreover, the most alluring actress in the film, Gemma Chan, who resembles a Siberian rendition of Melania Trump, is a quarter white.

One obvious problem with the film’s gimmick of an all-Asian cast is that East Asians, at least those who aren’t mixed race, tend to look alike. This problem is exacerbated because much of the film’s action, such as it is, consists of introducing the bewildered girlfriend to her boyfriend’s vast extended family.

With some success, the filmmakers try hard to give each of the characters enough tics to make all the second cousins moderately distinguishable, but it’s worth warning that the novel comes with genealogical diagrams. As in many movies with franchise potential these days, far more characters are introduced than are needed for the first installment’s thin plot.

Another problem is that there aren’t all that many Asian stars familiar to American audiences in 2018, at least not compared with the early 2000s when Chinese movie icons were more fashionable.

For example, the 2005 big-budget Hollywood film Memoirs of a Geisha controversially used three popular Chinese actresses (Yeoh, Ziyi Zhang, and Gong Li) to play Japanese roles because Chinese stars were then seen, in the wake of Crouching Tiger and Hero, as more glamorous than their Japanese rivals.

But Chinese cinema has receded puzzlingly from American awareness over the past decade. Today, the Red Chinese movie market is immense, second only to North America’s. But almost nobody over here besides Chinese students at American colleges cares anymore about Chinese-made movies, even ones that do a half billion in box office in China.

Thus, the only cast members I recognized were Yeoh and Ken Jeong, best known as The Hangover’s naked gangster in the car trunk. (In real life, Dr. Jeong is a Michigan-born M.D. of Korean descent.) Here he plays a crass nouveau riche zillionaire to contrast with the boyfriend’s posh family.

Tom Wolfe noted that “the existence of conspicuous consumption one has rightful access to…creates a sense of well-being.” But does the price of your ticket entitle you to rightful access? Or would the extravagant expenditures documented in Crazy Rich Asians leave you feeling a little queasy?

I’ve noticed an odd distinction over my years of moviegoing. I usually enjoy without reservation scenes of conspicuous consumption…as long as they are set in the past. For example, the entrance to the Copacabana in GoodFellas. Watching peak Scorsese, I enthuse: Back then, they had style and really knew how to tip!

Granted, someone might play the spoilsport and ask: How can 1963 Henry Hill afford to hand a $20 bill to every nightclub flunky in the joint? But, I reply: Of course he can afford it, he’s a vicious criminal!

On the other hand, contemporary conspicuous consumption leaves me wary and dismissive. Even though the dynasts in Crazy Rich Asians are portrayed as above reproach in their business dealings over the centuries, I still get the feeling that somehow I am being ripped off by them despite my never having gotten closer to Singapore than Hawaii.

Logically, I’m worse off financially today in 2018 due to the real-life predation and wasteful spending of the GoodFellas guys in America than anything the fictional builders in Crazy Rich Asians are up to today on the other side of the world. But it doesn’t feel like that to me.

And who’d want to live like a Singapore mogul anyway? What a shallow, tedious life of rooftop infinity pools.