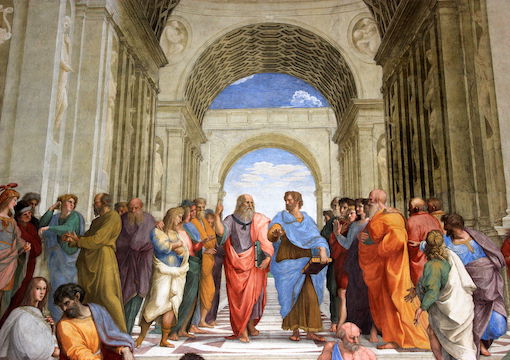 The School of Athens by Raphael

White nationalism is characterized as a vice by leading commentators. No one interested in retaining the respect of mainstream outlets defends the logic of white identity politics. Blacks and Hispanics may organize political groups to pursue a racial agenda, yet we frown on whites who make a case for similar organizations. It is argued that nonwhite institutions were created to protect the civil rights of other races from a racist political structure. However, accepting this premise does not vitiate the argument for white identity groups. People form racial groups for reasons other than protecting civil rights. As tribal creatures we express a desire to associate with similar individuals. Numerous immigrants have achieved widespread success due to the networking advantages generated by groups dedicated to advancing the status of racial minorities.

Similarly, white people—like Blacks, Hispanics, and the Chinese—also have goals that can only be pursued by racial organizations. For too long, white nationalism has been construed as a synonym for racism, though this is patently untrue. White people are entitled to create institutions preserving the legacy of Western civilization. It is preposterous to acknowledge the rights of other races to celebrate their culture but chastise whites for doing so. On its website, for example, the Chinese Consolidated Benevolent Association of New York openly declared that it exists to serve the goals of the Chinese-American community: “The Chinese Consolidated Benevolent Association (CCBA) was founded in 1883 to serve and protect the interests of the Chinese people in the New York metropolitan area.” The list of its functions is quite revealing:

“Counter to the propaganda of multiculturalists, Western civilization has been the most progressive force in history.”

If white Americans were to start a group to ameliorate the conditions of working-class whites, without a doubt charges of racism would be leveled against them. Unfortunately, the dehumanization of white people has support across the political spectrum. Suggesting that all races apart from whites can have interests is to rob them of agency, thus relegating them to a subhuman state. As such, white nationalism has never been more relevant. However, white nationalism must transcend national borders to reflect the salience of Western culture. White nationalists in America should not see themselves as a vanguard of a local white nationalist movement, but rather defenders of the Western intellectual tradition of which America is the greatest exponent.

Despite the rantings of multiculturalists, Western culture is indeed unique. As historian Toby Huff illustrates in his book Intellectual Curiosity and the Scientific Revolution: A Global Perspective, many places had brilliant thinkers, but only the West was dynamic enough to produce sustained intellectual revolutions that fundamentally transformed the globe. In Western society there is usually a fierce battle between the harbingers of modernity and traditionalists, and unlike most societies, innovators prove to be successful in the West. For instance, when Western scholars were confronted with the teachings of Arab intellectuals in the medieval ages, they embraced change. Contrary to multiculturalists, the fact that Westerners absorbed foreign knowledge is not a flaw; instead, this speaks to the superior ability of Western culture to be rejuvenated by progressive forces.

Moreover, though the heritage of Western civilization is the property of humanity, it must be stated that the West is a predominantly white civilization. Politically correct writers would never divorce the achievements of the Mali Empire from its blackness, and the same respect should be accorded to white civilizations. Some white nationalists envision a white ethnostate, but this is an exercise in futility. White Americans are not very ethnocentric, so there will always be white people who are willing to violate the rules of the white ethnostate to accommodate other races.

Therefore, it would make better sense for white nationalists to advocate cultural whiteness. Non-Westerners can assimilate into Western culture, because culture lacks a race. But if leftists want to conflate the culture that emerged in the West with whiteness, then white nationalists must gladly accept the labeling of Western culture as white. The major liberal thinkers in history are white men like Adam Smith, Adam Ferguson, John Stuart Mills, and even Thomas Aquinas if you associate liberalism with respect for individual dignity. Admittedly, slavery is a blot on the history of Western civilization, because freedom first became a cherished value in the West. However, after abolishing slavery, Western countries put pressure on the Middle East and Africa to do the same. Counter to the propaganda of multiculturalists, Western civilization has been the most progressive force in history.

On the other hand, currently the notion of multicultural whiteness is gaining steam, and this has resulted in many viewing whiteness as a doctrine of bigotry. According to Cristina Beltran, whiteness is “the politics of aggression, exclusion, and domination.” Further, based on her recent piece in The Washington Post, nonwhites can represent what she calls “multiracial whiteness” by displaying these features: “Multiracial whiteness reflects an understanding of whiteness as a political color and not simply a racial identity—a discriminatory worldview in which feelings of freedom and belonging are produced through the persecution and dehumanization of others.”

Hence white nationalists must reclaim whiteness as a philosophy of progress. After all, even liberals at the Smithsonian think that whiteness is indicative of success. Recently, the institute published a chart noting that traits we often consider to be responsible for success such as individualism, delayed gratification, and objectivity are emblematic of whiteness. The blowback was swift and furious, but the truth is that though such traits are not peculiar to white people, attributes responsible for success are overwhelmingly concentrated in Western society. For example, the Western world is more individualistic than other regions, and individualistic cultures are more innovative.

Clearly, the culture that emerged in the Western world is superior to other cultures. So, since liberals choose to lump Western culture with whiteness, then white nationalists are not wrong to argue that society would be better off if we would all become culturally white. The problem is that misguided liberals are preventing racial minorities from exploiting the benefits of what they deem “white culture.” In its coverage of the anti-racism movement, The New York Times recounts the sentiments of one activist who argues that “white culture is obsessed with mechanical time—clock time—and punishes students for lateness.” Valuing time is a key ingredient for success, so teaching black students that adhering to rules of punctuality is a form of white supremacy is to prepare them for lifelong failure.

White nationalists should not retreat into the wilderness. Like their liberal peers, they should unleash a long march through the institutions by building think tanks and new social media platforms. Creating a culturally white society is more practical than aiming to establish a white ethnostate. Objectively speaking, a culturally white society is a benefit for all racial groups. We must never forget that Western civilization created modernity and globalized human rights. With adequate funding to create appropriate platforms, the dissident right can indeed achieve its own long march through the institutions.