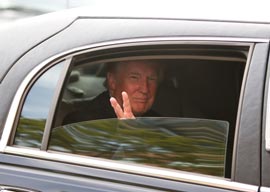 During the Republican debate on Wednesday, Ann Coulter asked, “How many f—-ing Jews do these people think there are in the United States?” She was referring, of course, to the massive amount of time candidates spend discussing barely 1% of the population. We saw this in the last election with gay marriage. Few understood her point and it sparked an immediate backlash that included Seth Rogen calling her a “horrible fucking idiot.” Then a backlash to the backlash entitled #IStandWithAnn. This meme was a play on a meme from the same day called #IStandWithAhmed wherein the entire country, including the president, fell for a publicity stunt created by the son of the guy who wanted to be the Koran’s lawyer when Terry Jones threatened to burn it. The boy brought a clock to school that looked like a bomb. As I assume was the plan, the school got spooked and Islamophobia dominated the news cycle.

That’s America today: easily duped and way off course. Whoever whines the most gets the most attention even if they”re a tiny fraction of the population”even if they”re lying. The crybaby generation is driving this boat and they don”t know how to drive. This is what’s so great about Trump. In an era where dupes are easily led, you need a great leader. Trump doesn”t pander to one-percenters of any sort. He’s even pushed for tax hikes on the very rich. When someone tells him to stop saying “anchor baby” he asks what their solution is, and after hearing how long it takes to say “American-born child of undocumented immigrants” he responds, “No.” Republicans already support Israel and are pro-life. Shut up about it and move on to genuinely contentious issues. We want to hear about immigration, and Trump was the first one to get the ball rolling. For the first time in decades, we have a presidential election that gets into what real Americans care about. And the rest of the politicians and pundits are floundering. They like debates to revolve around meaningless politically correct discourse. Can we call #BlackLivesMatter a terrorist group or is that too mean? Is air-conditioning sexist? When is it time to retire football? Fuck off.

“For the first time in decades, we have a presidential election that gets into what real Americans care about. And the rest of the politicians and pundits are floundering.”

If you really want to get into the hub of this mindset (I know you don”t, but you should because these people determined the past two elections), check out Rolling Stone. They began mocking Trump because hubris is amusing to them. I”m not sure why. I guess seeing white people who aren”t ashamed of themselves is so passÃ© it’s hilarious. Then, in August, shit got real, and they came out with “Donald Trump Just Stopped Being Funny: Win or lose, Trump’s campaign threatens to unleash the Great American Stupid.” A month later, they took the gloves off and printed “Trump Seriously: On the Trail With the GOP’s Tough Guy.” It’s an incredible piece and not just because it shows how far journalism has sunk since Hunter Thompson’s Fear and Loathing on the Campaign Trail. It’s fascinating because we see inside the mind of these beta liberal crybabies and learn they don”t hate the patriarchy. They love it. They”re like women who want to be spanked. You see this all the time with millennials. If you watch Drunk History you”ll hear gays describe First Ladies as “ride-or-die bitches” like the entire rap community doesn”t hate them. They wear T-shirts that say “Rap music makes me feel invincible” even though the lyrics contradict 100% of their beliefs. They religiously watch Game of Thrones, and dream of a land where powerful men would punish them for being weak. They chase American Apparel’s CEO out for being a horny, old, rich white man and then hold protests on the street when they realize they need him to survive. The betas like to complain and say, “I hate it here” as they storm upstairs to their room, but they don”t really want Dad to cut them off. They are that weird combination of bratty reverence where they pretend to be angry at the patriarchs they admire. They”re daddy’s boys.

The author of “Trump Seriously” usually writes about muscular men’s bodies. He appears to want to do a hit piece, but his reverence is hard to mask. He tries to summon disdain for Trump’s awesome “in-plane theater, with its oyster-shape couches and the 57-inch flatscreen tuned to Fox.” He tells us Trump likes “the theatrics of beauty” and lists all his breathtaking assistants. Did you know he wasn”t even on the honors list at Wharton? He was arrogant in military school and got in physical fights with lots of people, including authority figures. His father was a slave driver who made Donald work like a “peasant.” That last word says it all. The author doesn”t resent Trump’s wealth. He envies it. He sees the blue collars who Trump poured cement with and drank beer with as plebes. He”d kill to be adopted by Trump and say, “Let them eat cake” as he plops down in front of the 57-inch flatscreen. They all would. So why are we listening to them? Why are they determining our future? At one point the writer goes off on a bizarre tangent that seems to be mocking the Trump narrative but words it so nicely, it sounds like it came from Donald’s press office:

You don”t do a fraction of what he’s done in life”dominate New York real estate for decades, build the next grand Xanadus for the super-rich on the far shores of Dubai and Istanbul, run the prime-time ratings table for more than 10 years and earn a third (or sixth) fortune at it”without being immensely cunning and deft, a top-of-the-food-chain killer.

If those are insults, I want this guy at my roast. The story wraps by telling us Trump barely makes $362 million a year and would have trouble financing a $1 million/day campaign. What a stupid brat.

I still believe Trump is a snowplow who is paving the way for Ted Cruz. At the last second, he endorses Cruz and we get all the bravado of the former with the brains of the latter. However, it’s possible Trump goes to the finish line. I ain”t mad at that, either. The Democrats, the mainstream media, neocons, liberals, and college kids are all part of the same hive. They want to fight but they don”t want to win. They”re like that crazy Latina girlfriend in a screaming panic who won”t shut up until you grab her by the wrists and say, “Shut the fuck up. I got this.” We need to throw her onto the couch, grab a beer, and get back to work. That’s ultimately what she wants too. She just doesn”t realize it yet.