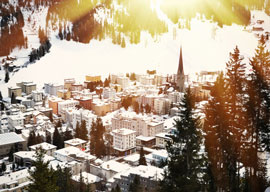 Gstaad—The Dolly Sisters were off to Davos last week for the World Economic Forum: Nat Rothschild and Sebastian Taylor in their finest, playing up to Harry Selfridge, in reality Christine Lagarde, the IMF chief under indictment. The purpose of a week’s total waste of time is advertised as a discussion of the global issues of the day. In reality it’s utter twaddle, unless one is networking like the Dolly Sisters, or showing off like Justin Trudeau, the Canadian premier whose mother is Margaret, once upon a time a Studio 54 regular and a friend of yours truly. Old Greek ship-owning families, prominent ones like the Livanoses, Goulandrises, and Chandrises, eschew such shenanigans, leaving it to that down-market version of Zorba the Greek, Alexis Tsipras, a man whose vulgar manner and hairy appearance would have pleased the likes of Tom Driberg and Guy Burgess almost as much as he’s pleased the Greek electorate, who have voted him prime minister twice within a year.

Not everyone in Davos is a hustler, starting with the sainted editor of The Spectator, who wrote in The Telegraph last week about his surprise at a 54-quid hamburger. You should try Gstaad during the high season, oh exalted one. Another good man among the barbarians was Dimitris Diamandopoulos, a.k.a. Jamie Dimon, of J.P. Morgan fame. Yes, we Greeks get around, but most of us dislike mingling in a circus of egotism and self-absorption like Davos has become. And speaking of Greeks, all of us here in Gstaad have decided to boycott the Academy Awards this year because no Hellenes have been nominated.

“The Donald’s consistency in the polls can be explained in five words: He speaks for the ignored.”

Actually, although invited to the after-Oscars party these last twenty years by the Vanity Fair editor, Graydon Carter, I have never attended. That’s because, year after year, no Greek actor or actress has made the nominated grade. I have spoken to my NBF, Harvey Weinstein, about having more Greeks among those who vote, but Harvey wasn’t aware that we had moving pictures in old Hellas. Especially talkies. Anyway, the mother of my children has decided to boycott watching the awards, which should scare the shit out of the networks, so expect Greek actors and actresses to be nominated next year for the first Technicolor movie that is also a talkie in the land of Tsipras. Who says African-American methods of crying foul nonstop don’t always work? The next thing you know, Charlotte Rampling will accuse Greeks of being anti-American, heaven forbid.

But let’s be serious for a change: What they should have been discussing up in the Alps is that jihadism is not about to be defeated in 2016, and that war and misery in the Middle East and Africa will send millions and millions of people to invade Europe. Tunisia, Pakistan, Afghanistan, Nigeria, Indonesia, Turkey, France, Iraq, Syria, and Egypt are under attack, and the fat cats up high in the Swiss mountainsides are discussing robotics and artificial intelligence. The migrant crisis is the greatest threat to Europe since a certain Austrian-born failed artist decided to send his Panzers east and west. A German chancellor was the bad guy back then, and a German chancellor is the bad guy today. A fact that kills this Greco-German, who loves the country of Goethe and Beethoven and Rundstedt and Guderian and Schubert and von Karajan, even more than Ava Gardner and Betty Grable.

But not to worry. Uncle Sam has the Saudis on his side—and William Kristol. The latter is a short, fat man who was the Goebbels to George W’s Führer. Kristol’s rhetoric and propagandizing helped persuade the most intelligent man to ever inhabit the White House to attack Iraq in 2003. And I ask you, dear readers: How is it possible that a man like Kristol and his fellow neocons are still influential in Washington after having aided and abetted the greatest American foreign-policy disaster ever? Millions have become refugees, perhaps a couple million have died, close to 2 trillion greenbacks have been wasted, and still these people are swanning around D.C. spreading their foul ideas.