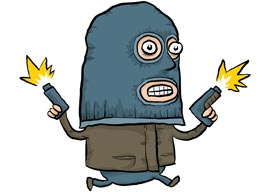 ¡Ay Chihuahua! According to the Daily Beast’s resident Islamic apologist, it’s not Muslims who are to blame for terror attacks on U.S. soil … it’s those damned Latinos! And to think: I hired my gardeners without an FBI background check (that’s a joke, people, okay? In reality, I made them take lie detector tests and submit blood and urine samples).

The Daily Beast’s claim is pure nonsense. But I thought it would be fun to bring some attention to it, because if there’s one thing I love, it’s seeing two left-wing-designated “victim groups” come into conflict. Jim Goad wrote a great piece last week about the “trannie vs. feminist” war, and in the words of Godzilla‘s Dr. Serizawa, I say: “Let them fight.”

Of interest to me here is the ease with which leftists will turn on their own in the name of soft-pedaling the threat of Muslim terror.

We saw this after Bill Maher dared to speak a little common sense about how, although all religions might be crawling with bullshittery, today’s Islam is awash in a particularly violent bullshittery that elevates it on the threat scale above the bullshittery of BahÃ¡”Ã­s or Buddhists.

In fact, Maher was only saying what other hipster atheist icons like Richard Dawkins and Penn Jillette had said before, but all of a sudden lefties had to order their priorities. What’s more important: those stunningly effective air quotes you make every time you say “God,” or protecting Muslims from racist KKK Islamophobic Fox News-watching fascists?

“Latinos vs. Muslims? Latinos lose out, just as atheists did. When we get to trannies vs. Muslims, that will be a fun battle.”

Maher lost, and many on the left turned on him.

The fact that the Daily Beast’s “progressive” Muslim columnist Dean Obeidallah would throw Latinos under the bus demonstrates how shallow and cynical the left is regarding its dedication to the Latino community. It also demonstrates the personal hypocrisy of Obeidallah, whose entire shtick is “Let’s not make blanket assumptions or cast aspersions about Muslims. Let’s not lump all Muslims together with the few in our midst who occasionally make oopsies. And for heaven’s sake, let’s not say anything that might encourage stereotypes or false impressions of Muslims.”

Apparently, when it comes to Latinos, “social justice warrior” Obeidallah has a different set of rules. In his January 14th Daily Beast column, “Are All Terrorists Muslims? It’s Not Even Close,” Obeidallah wrote:

Damn, that’s nearly half. That’s a pretty serious figure. By the way, you might have noticed that “Latino-related groups” is, shall we say, a vague term. You”d think an intellectual like Obeidallah would flesh it out a bit, for the benefit of his readers, to dispel any notions that Mexican immigrants were planting bombs around L.A. to protest the cancellation of George Lopez’s last sitcom.

So what’s the source for Obeidallah’s “Latino-related” claim? He relies on an annual FBI report called “Terrorism in the United States.” In 2010, a rather devious poster on a site called “Loonwatch” (dedicated to attacking anyone who considers Islamism a threat) got a really neat idea. There was an FBI summary of the “Terrorism in the United States” reports covering 1980 through 2005. The summary included data from Puerto Rico. In the 1980s, violence from Puerto Rican separatist groups was at an epidemic level. This violence was primarily in Puerto Rico, but sometimes in the U.S. proper as well. Eventually, the separatist violence slowed to a crawl and abated.

However, there were so many Puerto Rican separatist incidents in the early and mid-80s that if you tally everything from 1980 to 2005, the curve gets thrown off. The Loonwatch meme might have died out, but in late 2010 it was revived by a naÃ¯ve student reporter at Cal State Fullerton, and it went viral under the title “Only 6 Percent of Terrorists Are Muslim.” Note the use of the present tense; the trick here is to lump 25 years” worth of data in as though it’s all current.