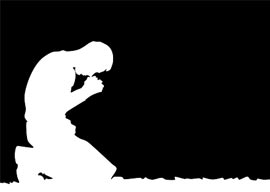 All across America, white people are apologizing to black people for things they didn’t do and historical situations they had no hand in creating. While it obviously makes these self-flagellating Caucasoids feel good about themselves, will it make even the tiniest difference in the lives of ordinary black Americans?

In Chicago”where blacks and Hispanics comprise 96% of murderers and a similar quotient of murder victims”a phenotypically white and extremely mannish-looking woman named Laurella Willis has been walking all over the Windy City’s notoriously murderous South Side toting a poster that says BLACK AMERICA I’M SORRY!! She reportedly traverses those mean streets for 20 miles a day, apologizing her ample ass off to anyone who’ll listen. One black resident told a reporter, “It’s very touching. Especially someone who’s not colored.”

Although Willis apparently has no trouble with multiple news sources describing her as “white,” on her Facebook page she appears to have fallen under the impression that she’s black:

…“WE”, meaning the black race won’t come together to support each other so HOW we gonna have change anywhere else? THAT is trick of the enemy! The devil DOES NOT want u to REALLY unite & STAY united!! Long as Black on black crime continues THE DEVIL has won bcuz your focus has been shifted from the TRUE issue! EQUALITY!!!

So…you want to become equal with the “devil”? I’m not sure I understand the reasoning, if any, here. And what if the true issue isn’t equality, but rather innate and intractable inequalities engineered by the grand magnificent process of evolution? What do you do then? How many apologetic sandwich boards will it take to correct nature’s inexorable processes?

It appears that Willis’s “I’M SORRY!!” poster”as well as Willis, it’s hard to tell from behind”made an appearance at the funeral of 310-pound convicted pedophile Alton Sterling, who was shot dead by police after he struggled with them while toting an unlicensed gun on his person. Al Sharpton and Jesse Jackson also appeared at Sterling’s funeral, their blowfish-shaped mouths farting out the same sanctimonious and innumerate coffin-riding nonsense that has made them rich beyond most black people’s wildest dreams.

Sterling’s death”which never would have happened if he hadn’t struggled and hadn’t been carrying a gun”was mentioned in a viral poem by a certain Pastor Savannah Martin of Tampa, a white woman who was invited onto CNN to pontificate about her weepy videotaped apology for white privilege that she’d set to rhyme:

I wasn’t born rich, but don’t get it twisted
See how I look, my white skin is my privilege.
I don’t get watched when I go to the mall.
If I get stopped for a ticket, it doesn’t end in a brawl….
I don’t know anyone murdered for selling cigs or CDs
I’ve never been choked out or shot at by corrupt men in PDs.

Of course, anyone who’s remotely sane realizes that Sterling was not “murdered for selling…CDs,” nor for being black, but righteous public displays of virtue-signaling have always operated independently of facts.

And although he delivered his spoken-word poem back in February, a 14-year-old Jewish boy from Atlanta named Royce Mann became an Internet celebrity last week when a video of his “White Boy Privilege” performance went viral. Choice bits from that “poem”:

Dear everyone who isn”t a middle or upper class white boy, I”m sorry. I have started life on the top of the ladder while you were born on the first rung….

Keep me out of your “we,” kid. I never claimed “we” live in an equal world. I believe the stubborn delusion that we’re all equal is the main source of modern social problems.

Writing for Huffington Post, a Jewish woman named Karen Fleshman”who calls herself a “White Woman” and works as a “Diversity and Inclusion Strategist [and] Race Educator””penned a “Love Letter” to America’s “Black Folks: