Death of the Obamabots 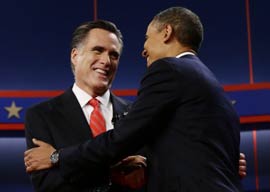 This gives us throbbing levels of immensely transcendent galaxy-tripping joy not because we think Romney is anything to write home about or that any substantial issues were raised during the debate, but because Obama’s lapdogs and water boys and bootlickers and lawn jockeys and Fourth Estate concubines have been trying their gosh-diggety-darndest to declare that Romney had already lost the election.

September had been an awful month for Romney, mainly because the overwhelmingly left-leaning media had insisted it was. Ever since the Democratic Convention adjourned and Obama built up an obviously insurmountable two-to-five-point lead in national polls, it seemed as if every headline on Yahoo! and Google News was some slight iteration of “Romney in Serious Trouble,” “Dark Clouds for Romney,” “Americans Say ‘Rom-NO,’” “Epic FAIL for Romney,” “Romney is Losing Badly,” and “Romney”Whatta Loser!” You would think they”d have learned something from the DEWEY DEFEATS TRUMAN debacle, but no.

You’d also think that journalists would actually occupy their time doing what journalists are supposed to do”you know, digging for dirt on both candidates until their knuckles bleed. Asking difficult questions. And most importantly, NOT TAKING SIDES in some prematurely triumphalist brainwashing scheme.

“September had been an awful month for Romney, mainly because the overwhelmingly left-leaning media had insisted it was.”

Instead, the repugnantly slanted media”hey, there’s documented evidence they conspired to get Obama elected during the last go-round”eagerly displayed their confirmation bias and cognitive dissonance by trotting out endless polls about how their caramel-colored American Idol was going to win this time, too, thus exonerating them from having to admit he’s been a failure on the level of Ishtar or Gigli.

To think that this wasn’t some sort of intentional and possibly orchestrated campaign to create an aura of invincibility around Obama’s greying head and thus discourage undecided voters and Romney supporters from even bothering to yank the lever on November 6 is, quite candidly, a sign of either naivetÃ©, denial, or Down syndrome. Possibly all three.

The reprehensibly fat and oily prog-pundit smarmball Cenk Ugly Uygur of The Young Turds Turks went so far as to declare on Monday that “This Election is Already Over “ Obama Won.”

But after Wednesday night, when Romney made creamed corn out of Obama, it is our sincerest wish that Uygur is curled up in a ball in the shower, trying to wash away all the shame while attempting to eat his own body fat.

The sclerotic and possibly senile Jim Lehrer, looking as if croissants had been surgically implanted under his eyes, briefly returned from the crypt to moderate Wednesday’s debate. Obama looked nearly as fatigued as Lehrer, but at least he used his “white” accent and left his blackness in the dressing room. Entirely absent was the corn-shucking Kingfish inflection he used while sucking up to Reverend Jeremiah Wright in front of an adoring black crowd in 2007. Still, at times he acted a bit too uppity for our tastes and behaved like someone who clearly didn’t understand his place in society.