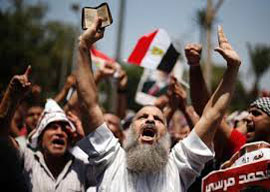 Regarding Egypt’s current turmoil, international neophytes of every stripe claim to know precisely what is happening in a nation they scarcely know outside of colorful pictures.

Here are some of the common arguments:

In one week nearly 1,000 people, many peacefully protesting women and children, were killed. Only monsters condone such actions. If you support the generals you are anti-democratic and authoritarian.
Adults also tolerate such actions. The death of protesters is nothing to a country of 84 million in a civil war. If responsible parties acted before either World War, the deaths of tens of millions could have been prevented. In retrospect, this would have been justified. Learning from prior events is called maturity. Disgusting acts done for a greater good are called leadership.

If you support Morsi you are a radical and probably a terrorist. The Muslim Brotherhood are modern Brownshirts already engaging in religious violence, possibly prefacing another Al-Qaeda.
There are always individual indiscretions and outright abuses when a new regime assumes power. Over the course of a year many were bound to occur. New religious laws were not dictates: An elected body and two national referendums passed them. Moreover, there is no evidence the government had any interest in a violent confrontation with the West.

“International neophytes of every stripe claim to know precisely what is happening in a nation they scarcely know outside of colorful pictures.”

If you support constancy you favor international banking and debt slavery. The West backs those who do their bidding, which is their bankers” business. Once Morsi rejected IMF loans, he was overthrown.
This is largely true, though reductionist. Myriad financial interests were involved in removing Morsi, who appears to have been a populist. When self-righteous Westerners want to surrender their vastly higher standard of living for these principles they may have a point. Until then, being well-fed, warm, and wealthy, they have little justification for such outraged magnanimity.

If you support electoral liberality you effectively support Arab nationalism. An Arabian Crescent was forming as a dangerous counterbalance to Western power.
While Morsi had support from some Arab states, others vehemently opposed him. Saudi Arabia donated a large amount of funding to unseat him. A little remarked upon “coincidence,” weeks prior to the coup a chief ally of the Brotherhood, the Emir of Qatar, abdicated in favor of his moderate son. Innumerable sub-sects make pan-Arabic unity unlikely.

If you support economic stability you are an interventionist. It is ridiculous we send so much money to Cairo when so many people are out of work here at home.
US aid to Egypt generally goes over there to buy weapons or produce made here. Funds are effectively a bribe to ensure American ships primacy through the Suez Canal. We get much more for “aiding” them than we give.

If you support Egyptian market reform you are an enabler of a worldwide financial depression. The Muslim Brotherhood imperiled the prevailing financial structure by their abrupt and confused policies.
Only those in favor of permanent Egyptian subservience advocate an economy dependent on foreign aid, foreign tourism, and foreign employment of workers. Morsi’s course might have been successful. But in the process Egypt would alienate America and Europe. It would have been highly disruptive regionally. It was naÃ¯ve to think invested parties would not intervene.