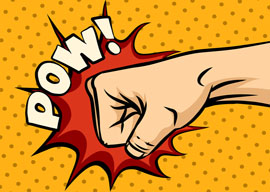 Perhaps it’s the sadistic caveman in me, but I have a lifelong love for the “sweet science” of boxing. I especially love watching unstoppable knockout artists such as undefeated Kazakh monster Gennady Golovkin crushing his prey.

Within my savage white heart I also harbor an ever-growing hatred for blubbery, bearded, bespectacled neo-Marxists who are historically illiterate and grossly out of shape. I’m not exactly sure when being fat, sporting a beard, and wearing horn-rimmed glasses morphed into a “look””it seems like a fusion of all the worst possible looks welded into one disgusting lump”but it’s the anti-style of choice for nearly all feminism-embracing, comic-book-collecting, Star Wars-worshiping, historically illiterate, snarky white male leftist hipsters these days.

Thus, a joyous lightning bolt of adrenaline shot down my spine when I first saw footage of a Belgian soccer hooligan knocking a barking commie flat on his fat ass with one vicious right last week in Brussels. It was a masterpiece of a punch.

Here’s one angle of this glorious knockdown blow. And another. And here you can see the moments leading up to it. Witness the adipose anti-fascist nu-male getting right up in the faces of Belgian nationalists and taunting them with absolutely no fear nor respect. One suspects he treats the Muslims of Brussels”who now comprise roughly a quarter of the city’s population and make it Europe’s jihadist capital“much more gingerly.

“Just as a journey of a thousand miles starts with one step, the European Civil War may have just started with one punch.”

Is it merely an accident that Brussels is simultaneously the capital of the European Union and Ground Zero for Islamic terror cells in Europe? And is it just an odd coincidence that almost without exception, modern progressives embrace the most egregiously sexist, patriarchal, and homophobic religion on Earth? No, because what unites the unelected EU bureaucrats who encourage open immigration and the deluded Marxists who welcome “migrants” with suicidally open arms is an unwavering moral conviction that everything innately European is evil to the core and needs to be exterminated.

The Red Whale is also seen chanting “fascistas no pasarÃ¡n,” a popular phrase used by communists during the Spanish Civil War. It roughly translates as “Fascists shall not pass.”

Whether fascists or not, they passed”right over his crumpled body. That is, until Belgian police showed up and dispersed the soccer rowdies with water cannons. Leftist cowards stayed behind and cheered while Big Brother did their dirty work for them.

The assailant is affiliated with Casuals of Belgium, an agglomeration of self-described soccer “hooligans” who have agreed to set aside their petty team loyalties and unite to fight Islamic encroachment in this tiny and culturally fractured nation.

Here’s the stony face of the assailant”who has been dubbed the “Hero of Belgium””as he leads likeminded nationalists to the Stock Exchange in Brussels. They were marching toward an Easter Sunday vigil commemorating the more than thirty people who were killed and the three hundred or so who were injured during jihadist nail-bomb blasts at a Brussels airport and metro station on March 22.

And here’s his snarling face after he decked the Red Whale.

Compare his mug to the chinless goobery beta visages of Belgian Prime Minister Charles Michel and socialist Brussels Mayor Yvan Mayeur. Both Michel and Mayeur loudly condemned the casuals’ appearance at the memorial vigil”perhaps more loudly than they criticized the Islamic bombers who ripped apart their capital city.

Which face would you trust to prevent Eurabia from ever becoming reality?