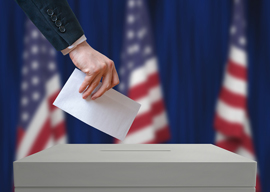 This morning (Nov. 1) The Times (London, not New York) had a gloomy leading article. Reflecting on what it described as the “dismal choice” facing the American electorate, it declared that “it would be consoling if this were an anomaly thrown up by an otherwise healthy system, but the reality is more troubling.” Representative democracy is, it seems, in poor health, if not yet on a life-support machine. The people are disillusioned, restive, and anxious. Meanwhile, authoritarian regimes”China and Russia, notably”make the running.

Now, the gloomsters have a point. Gloomsters and pessimists always do. Democratic politicians are rarely inspiring. Even when they talk a good game they find action difficult. Democratic government is cumbersome. There are all sorts of checks and balances that make it difficult to get things done, no matter how necessary we may think such things are. This is true everywhere, but especially true in the USA where the Founding Fathers in their wisdom designed a system to limit the power of government. Admittedly, in a modern democratic state, governments impose all manner of regulations on the people, on businesses and individuals alike, but their ability to change the direction in which society and the economy are moving is much less than politicians pretend. Donald Trump promises to make America great again. Easy words, hard”impossible?”to translate into action, as he will soon discover if he wins the election next week. His appeal as a candidate is obvious; he’s an outsider, not a career politician. Few of us admire politicians now, and in a democracy no politician can ever look to have the approval ratings that dictators, even tin-pot ones, enjoy. Margaret Thatcher was one of those rare democratic leaders who made the weather. She was disliked by a majority of the British electorate, even though she won three general elections thanks to the way the British electoral system works. Her approval ratings always fell far short of those enjoyed by Hitler or Mussolini or Vladimir Putin today. Whichever wins next week, Trump or Mrs. Clinton will be disliked”even loathed, distrusted, and even feared”by more people than voted for the winner. That’s democracy for you.

“Democracy deals in words and elections, not concentration camps and gulags.”

And a good thing, too, I say. Happy is the nation that doesn”t need a strongman or charismatic leader. Representative democracy offers limited government. Representative democracy allows you to boot the rascals out, with no pain inflicted except to their egos. Churchill got it right when he said in 1947, a couple of years after an ungrateful electorate had kicked him out of office: “No one pretends that democracy is perfect or all-wise. Indeed it has been said that democracy is the worst form of government except all those other forms that have been tried from time to time.”

This is something we should bear in mind, especially when many”not only the leader-writer of The Times“seem to be coming close to despairing of democracy. Whatever its failings, no matter how dismal the choice offered may appear, it’s better than the alternative. The American people can get rid of either Trump or Clinton in four years from now. It took defeat in a terrible war for the German to be free of Hitler. The Russians had to wait for death to free them from his fellow mass murderer Stalin. Democracy deals in words and elections, not concentration camps and gulags.

If you despair of democracy what you get will be worse. The Italians despaired of Giolitti’s liberal parliamentary system, and got Mussolini. The Great Depression destroyed faith in the young Weimar Republic’s democracy, and the Germans got Hitler, the Gestapo, and a war that, as we now know, they didn”t want. The Depression was every bit as severe in the USA as in Germany, but the institutions of government held firm, and President Roosevelt guided the country to better days. In Britain a dull and even drab government sat it out, and neither Fascism nor Communism got anywhere. The institutions matter. The constitutional structure matters. If these are strong enough, representative democracies can ride severe storms.

There are storms today. There is deep-set and wide-ranging dissatisfaction. The forces of the modern world”globalization and its child, mass migration from what we used to know as the third world”pile pressure on democracies in America and Europe. Free movement of capital and labor strains the social fabric. There is no easy answer to the turbulence of the modern world, and anyone who pretends to have such an answer is either a fool or a fantasist. But democracies are endlessly adaptable. They can seek and find a balance between the need for regulation of aspects of the economy and the need for deregulation of other ones. They can respond”sometimes slowly and uncertainly, it’s true”to social change. They can accommodate the new while holding on to what is good in the old or the existing order. They recognize, often unconsciously, that both order and liberty are necessary to a good society.