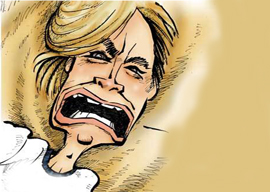 There’s something to be said for the almost universal leftist tendency to ignore unpleasant facts in favor of smearing their opponents as mentally ill. Not only is it far easier than constructing a coherent argument, it often works marvelously as a propaganda technique.

Therefore, I can”t see these well-meaning Left Bank humanists complaining if I were to borrow their time-tested methods to describe a prominent mental disorder that currently runs rampant”although undiagnosed and untreated”among their own kind.

I call this disorder “Passover Syndrome.” Almost exclusively, it afflicts relatively affluent Caucasians and is characterized by an array of cognitive delusions that ultimately may prove dangerous for its sufferers and those around them.

Passover Syndrome’s most prominent behavioral feature consists of whites projecting historical blame onto other whites and hoping that nonwhites will see them as not-so-white for doing so. Just as the ancient Israelites smeared sacrificial lamb’s blood over their doorways in order to escape the Angel of God’s vengeance, these delusional Caucasians smear bright red anti-racist graffiti”or, in extreme cases, the literal blood of “rednecks” and any “right-wing white” who refuses to get with the program”over their doorways in the hope that when the Dark Angels finally come en masse seeking “justice,” they won”t accidentally notice that the people with the bright red anti-racist paint over their doorways also happen to be white.

What drives this syndrome is the delusion that collective historical ethnic guilt is a real thing rather than a pseudo-religious abstraction. Passover Syndrome’s sufferers tend to believe that all whites, by dint of skin color alone, are indelibly stained with guilt for unsurpassed historical atrocities and that their debt to nonwhites won”t be repaid until the very concept of “whiteness” ceases to exist”if not white people themselves.

What’s most curious about this syndrome is the delusion that by merely acknowledging this imagined historical debt, they are able to somehow transfer it onto other whites”the “unenlightened” ones who don”t acknowledge it”without having to make any sacrifices or installment payments of their own. A consistent feature of Passover Syndrome is an eagerness to offer up a whole other group of whites as sacrificial collateral for their own perceived debt. It’s fundamentally irrational and unethical to believe that one can atone for one’s guilt, real or imagined, by transferring it onto a family member, yet this delusion is surprisingly strong among those with the disorder.

Indeed, guilt-projection is one of Passover Syndrome’s most consistent features. Although the malady almost solely attacks Caucasians in high-income brackets, sufferers tend to blame lower-class “rednecks” and “white trash” for slavery and its after-effects. In truth, it’s far more probable that affluent Caucasians are descended from slaveowners than are low-income whites, who are more likely to count indentured servants among their progenitors. This constant finger-pointing of others as “racists,” all while exhibiting an unceasing obsession with racial matters, also strongly suggests projection.

“The truth is that nonwhite cultures don”t tolerate traitors within their ranks to nearly the degree that supposedly ethnocentric whites do.”

Passover Syndrome is similar to homophobia in that its sufferers make a point at every turn of assuring you that they aren”t racist, much as the homophobe feels a neurotic compulsion to constantly remind you he isn”t gay. Passover Syndrome shares features with Stockholm Syndrome in that its sufferers mistake as benevolence the fact that those who have a perceived right to kill them still haven”t killed them. This is often misinterpreted as tolerance and acceptance rather than, say, procrastination or lack of opportunity. Passover Syndrome also has many traits in common with oikophobia, but since so many Westerners who dominate the social sciences are themselves afflicted with oikophobia, this grievous disorder has not yet been properly classified as a mental disease.

Self-deception is another common factor in Passover Syndrome. Sufferers identify with the “underclass,” yet they never seem to come from it nor actually spend any meaningful time around its members. In many if not most cases, they live in far safer and whiter areas than the white “racists” do. Therefore, while they claim to intimately understand “racism,” they rarely have experienced the sort of competition over jobs and resources that historically gives rise to it.