Did You Ever Think You Would Miss the Nazis? 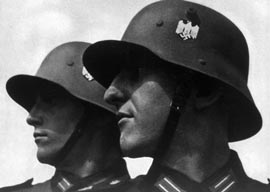 I married a WWII buff. That means the “Hitler Channel” logo is seared into the bottom right corner of our TV screen. I figured after nearly 20 years of this, I knew about every single badass of the Second World War.

Men like Leo Major, the partially-blind Canadian soldier who single-handedly liberated Zwolle by tricking the Germans into believing they were surrounded; Consul-General Chiune Sugihara, a.k.a., “the Japanese Schindler;” and the “Four Chaplains,” are regulars.

But somehow, until last week, I managed to miss the tale of Douglas Bader.

A prewar plane crash cost Bader both his legs, but he still managed to fulfill his childhood dream of joining the RAF. As a squadron (and later wing) commander, Bader and the pilots under him racked up an extraordinary number of confirmed kills (while losing very few of their own men).

On August 9, 1941, Bader was shot down, captured by the Germans, and taken to a POW camp. This is where the story gets particularly interesting:

When he bailed out, Bader’s right prosthetic leg became trapped in the aircraft. (…) General Adolf Galland, a German flying ace, notified the British of his damaged leg and offered them safe passage to drop off a replacement. Hermann GÃ¶ring himself gave the green light for the operation. “¨”¨The British responded on 19 August 1941 with the “Leg Operation””a RAF bomber was allowed to drop a new prosthetic leg by parachute to St Omer, a Luftwaffe base in occupied France.

“When we bother destroying their strongholds, who can even tell? You can”t bomb people back to the Stone Age if they never left.”

Oh, and while he (and his new leg) were recuperating in the prison hospital, Bader tied some bedsheets together and escaped from a high window. In fact, he “made so many attempts at escape that the Germans threatened to take away his legs.”

It sounds like a lost Goon Show script. Or an episode of Hogan’s Heroes“which made POW life appear so thrilling yet utterly uninjurious that, while other girls daydreamed about Mary Tyler Moore’s mod Minneapolis bachelor pad, I fantasized about the snug, comradely confines of Staling 13.

(By the way: in a delightful pre-postmodern touch, the Nazis on that show were played by Jews. Knowing that makes watching the old reruns super-trippy.)

Yet Bader’s story, if certainly not reflective of the Germans” (or the Japs” or the Russians”), is nevertheless true.

It’s enough to turn that German guest’s faint final words”as he stands amid the chaos in the Fawlty Towers lobby”back upon him: “However did they win?”

I asked my husband, seated beside me on the couch during the Bader doc, if he could imagine ISIS or Al-Qaeda or whoever they are this week coordinating airdrops for amputees, or merely “threatening” to hide their prostheses. It was a rhetorical question.

Because as wiser men than I have noted since 9/11, at least Germany and Japan were highly advanced civilizations. Some might say too cultivated for their own good (or make that “the good of the rest of us”), making a crashing, bloody regression toward the (other kind of) “mean” nigh on inevitable.

So after we bombed the crap out of them (although not enough in Germany’s case to suit me), at least some survivors retained memories of their culture’s rational past, all the better to reconstruct or even surpass it. (With an infusion of American billions, that is.)

Today’s Muslim belligerents either have no such past, or are busily trying to eradicate any trace of it. When we bother destroying their strongholds, who can even tell? You can”t bomb people back to the Stone Age if they never left. And in any case, this time we reinstituted the Marshall Plan before we half wiped them out”a fatally ass-backwards move.