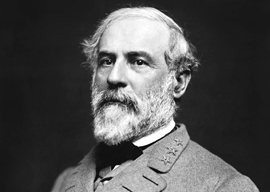 A rally in Virginia on Saturday intended to “Unite the Right” ended in chaos and bloodshed. The way events unfolded suggests that the main battle plan for the powers that be in America has nothing to do with illusions such as “left” and “right”—nah, instead, their primary goal appears to be Dividing the White.

The rally was organized to protest the ongoing erasure of Confederate monuments throughout the South, specifically the Robert E. Lee statue in Charlottesville, VA. It was scheduled to launch at noon and featured speakers such as Richard Spencer, Mike Enoch, Matthew Heimbach, and Christopher Cantwell. A rather visually fetching poster advertising the rally shows Confederate statues silhouetted in the back as a squadron of Rebel-flag-waving Civil War soldiers, half with Pepe the Frog’s face, stand guard and defend the statues’ honor. What appear to be some sort of German eagles fly above the soldiers. I’m not exactly up to date on my Nazi/eagle iconography, but it’s fair to say the average brainwashed American observer could be forgiven if they thought the poster invoked Nazi and Confederate imagery. I don’t think the organizers would try (or even wish) to deny it, either.

The rally’s planners had jumped through every possible legal hoop to ensure that the rally would commence without a hitch. Once they were issued a permit, it was revoked by the coffee-bean-colored Wes Bellamy, Vice-Mayor of Charlottesville. Wes never seems to miss an opportunity to remind you of his blackness. Among the groups he has joined (and even led) include 100 Black Men of Central Virginia, Young Black Professional Network of Charlottesville, and Charlottesville/Albemarle Alliance of Black School Educators. In case you missed it, Wes Bellamy wants you to know he’s black.

“What’s curious is the keening, unhinged hatred that the ‘anti-racist’ whites have for their genetic cohorts who refuse to join them in their creepy, ethnomasochistic psychological self-cleansing rituals.”

In tandem with his love of being black, Bellamy appears to hate white people. Over the years, Charlottesville, VA’s current Vice-Mayor has posted the following gems on Twitter (republished unedited and uncorrected):

Lol funniest thing about being down south is seeing little white men and the look on their faces when they have to look up to you.

I DONT LIKE WHIT PEOPLE SO I HATE WHITE SNOW!!!!!

Mind you, this is the guy who initially revoked a legal permit to hold a rally in Charlottesville on the premise that the attendees were hatemongers. I’ve searched and have been unable to find evidence of any of the scheduled speakers for the “Unite the Right” rally saying something quite on the Hate Level of “black women are the devil” or “I hate seeing black people in Arlington” or “I DON’T LIKE BLACK PEOPLE SO I HATE LICORICE!!!!!” Actually, I’d like to see any white politician in America who’s said equivalent things and still has their job.

The point is that Wes Bellamy is vocally pro-black and anti-white, still has his job, and he tried to use government power to squash a pro-white rally. And I haven’t seen anyone in the mainstream media even question whether there might be something even a tiny bit wrong with that scenario—some sort of, you know, insanely hypocritical double standard that might cause, or may even be engineered to cause, racial conflict rather than racial harmony.

To their credit, the ACLU stepped in and was able to reinstate the permit. On Friday night—on the eve of the rally—members of this coalition of neo-Confederates, white nationalists, Alt-Righters, and European traditionalists lit tiki torches and gathered beneath the Lee monument. Marchers chanted things such as “BLOOD AND SOIL” and “YOU WILL NOT REPLACE US.” The most amusing footage from that night rally involves a trans dude who calls himself Emily Gorcenski freaking out that his side was severely outnumbered.

But his side—aided and abetted by the police, government officials, and nearly all of the media—would show up in full force the next day.

I did not attend the event, but from what I can piece together from firsthand accounts, this is roughly what happened:

On Saturday morning, rally attendees headed toward Lee Park, where the event was scheduled to launch at noon. En route, they were met by the usual ragtag patchwork coalition of bused-in masked white anarchists, shirtless local black males with homemade flamethrowers, and shrieking obese transgender wallabies from the nearby college. As is their habit, the Antifa types began screaming and taunting and poking. They allegedly spat at anyone suspected of being a “Nazi,” also flinging urine, feces, rocks, and even cement-filled bottles at them.

Shortly before noon, police announced that a state of emergency had been declared and that the entire event therefore suddenly constituted an unlawful assembly. Pro-black Vice-Mayor Wes Bellamy’s wish had been granted: There would be no pro-white rally in Charlottesville.

Everyone was ordered to leave Lee Park immediately or face arrest. Whether or not the police—or, more likely, the people who were pulling their strings—were aware of it, this is the tactical situation they were setting up: They were forcing a large crowd of easily identifiable pro-white activists to disperse straight into the maws of the BLM and Antifa fanatics who consider it their highest moral calling to bloody and kill any white person who publicly declares it’s OK to be white.

I can see why the Black Lives Matter dudes, however knuckleheaded they are, would have problems with a pro-white rally. That’s simply how phenotypical racial tribalism works. What’s curious is the keening, unhinged hatred that the “anti-racist” whites have for their genetic cohorts who refuse to join them in their creepy, ethnomasochistic psychological self-cleansing rituals.

It’s hard to argue against the contention that in the current climate, any white person who doesn’t go out of their way to apologize for being a white person is Public Enemy Number One. What’s sociologically fascinating is this intra-racial tribal war among what are called the goodwhites and the badwhites. In case you couldn’t figure it out, the “goodwhites” are the ones that are constantly apologizing.

Shortly after being told that Lee Park was off-limits, police announced that the entire city of Charlottesville was an unlawful-assembly zone. The rally-goers were thus forbidden from holding smaller events in nearby parks. So as they dispersed, they were sent into the hands of bat-wielding local blacks, who persistently taunted them as they quietly tried walking to their cars.

I watched about twenty minutes of a livestream in Charlottesville where a lone white guy with a shaved head and sunglasses had a prolonged standoff with dozens of local blacks and a smattering of communist white weirdlings who mostly stood back and let their more muscular black allies do most of the taunting. I also watched another livestream where Alt-Right types were walking away from the event were screamed at by blacks leaning out of passing cars. According to accounts, many of the blacks who roamed the streets of Charlottesville couldn’t tell the difference between white nationalists and white anti-racists, so they harassed them all indiscriminately. This is funny to me for reasons that should be obvious.