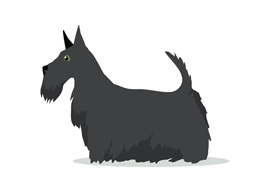 On the topic of “noteworthy accomplishments,” here’s an ironic one: With How the Scots Invented the Modern World, author Arthur Herman somehow wrote a book that is tedious in direct reverse proportion to its subject”that is (as the subtitle teasingly promises), The True Story of How Western Europe’s Poorest Nation Created Our World and Everything in It.

I”ve rarely anticipated reading a book so much, nor been as bone-deep disappointed when I did.

It hung at child’s-eye level from the handle on her oven door. As scratchy and impermeable as all her linens (she considered fabric softener a newfangled luxury), that tea towel was a cheap (what else?) souvenir from one of her rare trips back to Scotland, a.k.a. “the Old Country.”

It displayed off-register images of James Watt, Sir Alexander Fleming, and as many others as could fit, but of course, these barely scratched the surface when it came to portraying all the great Scottish inventors (which is more than I can say for the surface of her dishes…).

My grandmother never invented a thing. She was the utter opposite of a genius, and besides being cheap (my Christmas presents were often stuff she”d rescued from the trash), was uncouth, cold, and, well, Scottish: When other kids visit their grandmas, they”re served Kool-Aid and cookies and Coke; I was lucky to get a plate of saltines and a lukewarm can of Collins mix.

Like it (all those innovators!) or not (the woman ate tripe, ferchrissakes…), “Scottish” became my default nationality. My paternal grandparents were a mystery, and my father, mostly absent. All anybody ever told me was that “Shaidle” was German.

“Are we lying to our children and ourselves about our ethnic origins, and if so, why?”

And even that was cast into doubt about ten years ago when some stranger assembling his family tree got in touch. He”d left me near the end of his quest because “We always tried to…avoid the Shaidles…you know…” Do I! And not just my known relatives, who are now mostly, conveniently, dead; there’s also a “Kevin Shaidle” who owes a ton of money, judging by the calls I get from collection agencies.

Then: “Of course, your father was adopted,” said my inquiring distant relation matter-of-factly. Which was news to me. I”d always gotten a sick kick out of announcing my heritage as Scottish-German: It’s a particularly bloodcurdling ethnic brew, without a whiff of Mediterranean warmth (thank God) or Gallic passion (puke).

But out of nowhere, that second, post-hyphen slot was taken up by a question mark.

Fast-forward to 2016, and such genetic blanks can be filled in for about a hundred bucks and a gob of spit, thanks to outfits like Ancestry DNA and 23andMe.

Has anyone else noticed that the insane popularity of getting your DNA tested coincides with the rise of the “race is just a social construct” myth”a kind of populist, Trumpian “screw you” to the elites?

Not that the elites themselves are untouched by such curiosity: Led by Professor Henry Louis Gates, numerous otherwise “progressive” celebrities have submitted to swabbing, dutifully expressing ecstasy when even an iota of black or Indian blood is detected”and famously squirming when they turn out not to be as Hispanic as they”d led producers and fans to believe.

Among the lumpen, “Ancestry DNA results“ constitute a growing YouTube genre, and, in tune with the company’s own commercials, the nearly uniform “money shot” reaction is one of gobsmacked surprise:

An individual has been told all their lives they were Race X (in whole or in part), and now their genes tell a different story.

What’s that about? Are we lying to our children and ourselves about our ethnic origins, and if so, why?

Is perceived exoticism really the only reason? Yes, yuppie parents strive to get their kids into the “right” preschool, all the better to get them accepted to Harvard one day”but who the hell’s ancestors played a long, “Elizabeth Warren”-type affirmative action con on their unborn grandchildren’s behalf two or three generations back?

Anyhow, I ordered an Ancestry DNA test, put off even opening the box for a week because just the thought of saliva sets off my gag reflex, then made myself (gaaaaaghhhhh) spit (gheeeeee) into the little test tube and mailed it back.

Sooner than expected, an email announced that my results were ready at their website.

So I clicked and…it was even more disappointing than that crappy book about Scotland.

Because there was no Scotland.