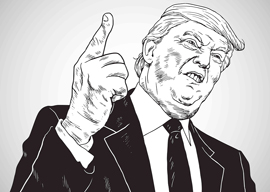 Trump’s barely been in office a year and a half, but already his presidency has been analyzed to death, with every new diagnosis contradicting the last. Trump’s a “4D chess master!” No, he’s a charlatan ill-suited for public office. Please, he’s an outsider with a grand vision, hobbled by a deep-state legion of leakers and traitors. C’mon, he’s clinically insane, with incipient dementia. Wrong again, he’s a crouching tiger, his seeming missteps merely a diversion to lull his prey into a false sense of security. Be serious, he’s Åke Axelsson’s chimp, mindlessly flinging paint at the wall as others foolishly debate the merits of his art.

Every theory, from every angle, has been stated and restated. Surely at this point there can be no fresh analysis of this man and his presidency. At least that’s what I thought, until a few weeks ago, when I spent the afternoon with Ann Coulter, having lunch at one of Beverly Hills’ most revered Jewish delis.

Ann Coulter and David Cole walk into a Jewish deli. I’ll let you write your own punchline.

After surviving a surprisingly pleasant encounter with the paparazzi, as we walked along Rodeo Drive past the fancy boutiques catering to gullible Asian tourists, Ann shared a theory about why Trump has elicited so much irrational hatred from one particularly influential U.S. demographic group. And what she said hit me right in the gut. She’s never publicly written about this theory, but with her permission I’ll present it here. Suffice it to say, it falls into the category of “Wish I’d said that.”

A brief preamble. Ever since Trump announced his candidacy, I’ve been baffled by the outpouring of blind, irrational hatred directed at Trump by my fellow Jews. It’s a hatred that goes beyond partisan politics. Sure, Jews always hate the Republican. But this is something different; this is a hostility, a bitter antagonism, that I typically see directed at people like me. Or actual Jew-haters like David Duke. But Trump? This was a man with absolutely no history of being anti-Jewish. He’s a gentile who’s mixed with Jews his entire life, in business, in family, and he’s gotten along just fine.

“Ann Coulter and David Cole walk into a Jewish deli. I’ll let you write your own punchline.”

Millionaires and magnates who actually are anti-Jewish (like Henry Ford) develop a reputation long before they hit their 70s. When I was a kid, my mom, a Brooklyn-born Jew, worked as a commercial graphic artist, and it was common knowledge among the people in her field which companies didn’t hire Jews. For example, the Hall family (of Hallmark Cards) and the Knotts family (of the eponymous Berry Farm) had a reputation, deserved or not, for not employing Jews. Trump has never had any such rep. In the 1990s he publicly slammed the private clubs of Palm Beach for not admitting Jews. He opened Mar-a-Lago with the stated purpose of bringing a club into the community that was open to Jews and other minorities. His daughter married a Jew and converted, and his son-in-law is a trusted adviser (for better or worse). Are those the actions of an anti-Semite?

Some of the evidence presented for Trump’s supposed Jew-hatred actually proves the opposite, like the 1991 allegation by the former president of Trump Plaza that Trump once remarked, “The only kind of people I want counting my money are short guys that wear yarmulkes every day. Those are the kind of people I want counting my money. Nobody else.” How very Nazi of him to insist on entrusting his money to Jews. As I pointed out earlier, my mom knew the anti-Semites in her biz by the fact that they didn’t hire Jews. Trump was a guy who wanted Jews as employees and associates.

But according to a large faction of vocal Jews, Trump is the greatest existential threat to the Jewish people since Hitler. He’s a Nazi, a fascist, a Father Coughlin, a George Lincoln Rockwell. The claims are so over-the-top, they’d be funny if they weren’t insane.

I’ve followed (and been the target of) Jewish outrage for damn near thirty years, yet I’ve never seen anything this extreme. There’s gotta be a reason for it, right? Is it Trump’s immigration views? It can’t be that alone. When Pete Wilson, at the time the governor of California, decided to hang his 1996 presidential bid on the illegal-immigration issue, sure, Jews on the left were outraged, but it was just standard partisan gamesmanship. Defeat the Republican, say what’s necessary (“racist,” “misogynist,” “fascist”), and at the end of the day go back to being Ralph Wolf and Sam Sheepdog, punching the time clock and saying a friendly goodnight, because much of what had preceded was theater.

Ann Coulter’s theory is that Jews dislike Trump because he reminds us too much of ourselves. More specifically, in style and manner he reminds us of the traits we’re most often ridiculed for. Trump is a loud, boorish New Yawker. He’s foulmouthed; he has no “indoor voice.” He’s clumsy when delicacy is called for; he gesticulates madly and almost certainly spits when he talks. He’s a slumlord, and a master manipulator of finance and bankruptcy law. And the strikingly beautiful women he surrounds himself with are most likely only there because of the money. Basically, he’s a Streicher cartoon without the Jewface. For Jews, gazing at Trump is like looking at a fun-house mirror reflection of the very worst anti-Semitic stereotypes. And Jews don’t want to see that in a president, because it makes us feel uncomfortable (we are, after all, a people known for our neuroses).

Ann’s theory hit me like a lightning bolt. Because yeah, the more I thought about it, the more I realized that Trump is essentially my late cousin Sol. Sol was a kind, pudgy, jovial man who could never moderate his tone. In the middle of a crowded restaurant, he’d talk about a rash on his ballsack or the regularity of his bowels. If there was a black or a Mexican in the room, he’d make a schvartze or wetback joke (“Hey, it’s just a joke! Lighten up!”). His put-downs of fat women would have made Al Bundy green with envy. And sometimes, after giving offense, he’d wonder why people were upset, as he was “just being honest.”

He was base, he was coarse. On a personal level, if you were in need, he’d give you the shirt off his back. But a lot of people could never get past his manner. Talk to your average East Coast Jew, and they’ll have at least one cousin Sol in their family tree. And now we have one as president.

Obviously, not every American Jew rejects boorishness (as evidenced by the typical Hollywood “comedy” film). But the ones in D.C., and the ones in positions of influence in the news media, certainly do. These upper-echelon Jews don’t want to be the Jerry in a room full of Deans. They want to fit right in with the old money and the political dynasties. The worst thing you can do to them is show them a president who resembles the person they’re so desperately trying not to be, because of course they will hate that man. “New York vulgar” offends high-society Jews the same way “Compton ghetto” offends a middle- or upper-class black.

I suppose it can be said that Trump “triggers” Jews in a way that no other Republican in recent times has.