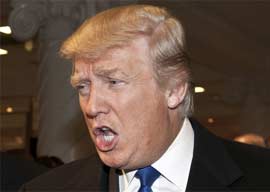 So was Donald Trump referring to Megyn Kelly’s nose or her vagina?

The backstory: Trump had come roaring into Cleveland on Thursday night with his hair flapping boldly in the wind. He was the undeniable Republican frontrunner ready to debate nine bland, sold-out nonentities who are so afraid of saying anything remotely insensitive that they’re all secretly wearing diapers lest they soil themselves.

Fox News hosted the debate, and the network’s marquee blonde bombshell Megyn Kelly confronted Trump about how he had variously referred to women as “fat pigs, dogs, slobs, and disgusting animals.” Trump interrupted her to say, “Only Rosie O’Donnell,” but Kelly said Trump’s verbal denigration of the fairer sex extended far beyond O’Donnell. She mentioned an incident where Trump “once told a contestant on Celebrity Apprentice it would be a pretty picture to see her on her knees.” She asked if such statements reflect “the temperament of a man we should elect as president” and also whether it would bolster the Democrats’ assertion that Republicans are waging a “war on women.”

“I think the big problem this country has is being politically correct,” Trump responded to loud applause. He then went on to mention how the USA is losing economically to both China and Mexico. This is a theme that Trump repeats almost every time he speaks publicly, yet it’s an angle that the press almost never mentions.

Why, it’s almost as if they don’t want to talk about such things. They’d rather focus on him being a racist and a sexist. And “they” includes “other Republicans.” That’s all they seem to care about”whether Trump is going to say something that’s going to hurt the feelings of an oppressed and aggrieved minority.

On Friday while being interviewed by CNN’s sexually ambiguous token black man Don Lemon, Trump made the following digs against Kelly:

Believe me, there’s a big difference between Mike Wallace and Chris Wallace. Because I watched him last night and, you know, blood pouring out of his eyes, too.

Of course, people focused entirely on the “blood coming out of her wherever” part and ignored the fact that Trump had also mentioned blood coming out of a male panelist. Why place things in context when there’s an agenda to pursue?

They insisted that “wherever” was actually coded hate speech for “Megyn Kelly’s vagina,” and that Trump was dragging out the old sexist canard that women act differently while they’re menstruating, despite the uncomfortable fact that it’s well established that menstruation can often negatively impact a woman’s mood.

Republican Token Female Presidential Candidate Carly Fiorina insisted that “Women understood [Trump’s] comment” to be a direct swipe at how daffy and impetuous females can act while menstruating and that there was no excuse for Mr. Trump to have brought bleeding female vaginas into the political discussion, even though to be honest, the only ones who were insisting that bleeding vaginas had anything to do with it were Trump’s enemies.

On Twitter”where he’s constantly insulting people as if he were a mix of Ronald Reagan and Don Rickles”Trump denied that his “blood” comment had anything to do with Megyn Kelly’s magical mystical sacred vagina and was instead a reference to her nose:

“Only a deviant would think anything else,” Trump later told a reporter.

And see, this is why I love Donald Trump. It has nothing to do with his policies, because I don’t know what they are beyond the fact that he hates illegal immigration. And I care not whether he was referring to Kelly’s nose or her vagina, either. What I love is that we’re living in the year 2015 and he uses the word “deviant.” It’s more refreshing than a thousand Altoids to hear a presidential candidate refer to others as deviants. I’d bet the last president to call someone a deviant was Nixon, and I love that guy, too.