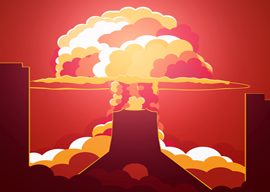 This next week may determine whether President Trump extricates us from that cauldron of conflict that is the Middle East, as he promised, or plunges us even deeper into these forever wars.

Friday will see the sixth in a row of weekly protests at the Gaza border fence in clashes that have left 40 Palestinians dead and 1,500 wounded by live fire from Israeli troops.

Monday, the U.S. moves its embassy to Jerusalem. Tuesday will see the triumphal celebration of the 70th birthday of the state of Israel.

Palestinians will commemorate May 15 as Nakba, “The catastrophe,” where hundred of thousands of their people fled their homes in terror to live in stateless exile for seven decades.

Violence could begin Friday and stretch into next week.

Yet more fateful for our future is the decision Trump will make by Saturday. May 12 is his deadline to decide whether America trashes the Iran nuclear deal and reimposes sanctions.

While our NATO allies are imploring Trump not to destroy the deal and start down a road that is likely to end in war with Iran, Bibi Netanyahu on Sunday called this a Munich moment:

“Nations that did not act in time against murderous aggression against them paid a much higher price later on.”

From a U.S. standpoint, the Munich analogy seems absurd.

“The Israelis, Saudis and Beltway War Party want the deal trashed, because they want a U.S. clash with Iran.”

Iran is making no demands on the United States. Its patrol boats have ceased harassing our warships in the Persian Gulf. Its forces in Iraq and Syria do not interfere with our operations against ISIS. And, according to U.N. inspectors, Iran is abiding by the terms of the nuclear deal.

Iran has never tested a nuclear device and never enriched uranium to weapons grade. Under the deal, Iran has surrendered 95 percent of its uranium, shut down most of its centrifuges and allowed cameras and inspectors into all of its nuclear facilities.

Why Iran is abiding by the deal is obvious. For Iran it is a great deal.

Having decided in 2003 not to build a bomb, Iran terminated its program. Then Tehran decided to negotiate with the U.S. for return of $100 billion in frozen assets from the Shah’s era—by proving they were not doing what every U.S. intelligence agency said they were not doing.

Should Iran rashly decide to go for a nuclear weapon, it would have to fire up centrifuges to enrich uranium to a level that they have never done, and then test a nuclear device, and then weaponize it.

A crash bomb program would be detected almost instantly and bring a U.S. ultimatum which, if defied, could bring airstrikes. Why would Trump risk losing the means to monitor Iran’s compliance with the deal?

Israel, too, has an arsenal of nuclear weapons that can be delivered by Jericho missile, submarine-based cruise missile, and the Israeli air force.

Why then is the world anxiously awaiting a decision by President Trump that could lead to an unnecessary war with Iran?

The president painted himself into this corner. He has called the Iran nuclear deal “insane” and repeatedly pledged to tear it up.