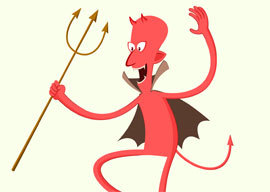 In his first letter to “God’s elect, exiles scattered throughout the provinces,” the apostle (then Pope, later Saint) Peter warned his flock:

[Y]our adversary the Devil, as a roaring lion, walketh about, seeking whom he may devour.

The vague yet troubling notion persists, voiced by preachers, pop novelists, reporters, and rock stars alike: that from Salem to San Francisco, the Devil has done a helluva lot of that roaring and walking about in the United States of America.

So you could practically hear Jack Chick screaming, “I told you so!” last week when news emerged that pro-abortion demonstrators in Austin had tried to drown out pro-lifers by chanting “Hail, Satan!”

Naturally, the liberal media that gave us the priceless expression “Fake but Accurate“ reacted as it always does when its comrades are caught doing or saying something insanely embarrassing and ridiculous.

“Satanism comes across as a kind of Goth objectivism but manages to express itself without the average Ayn Rand follower’s pompous, unearned sense of superiority.”

First: They denied it happened as reported.

Next: They admitted it happened but insisted it was exaggerated, ironic, done by “right-wing plants” or “taken out of context.”

Finally: They admitted it wasn”t exaggerated or taken out of context but insisted that it’s no big deal anyhow.

The Atlantic Wire”s Elspeth Reeve”whose reputation for unbiased, impartial accuracy is famously shaky“used the first two tactics while trying to defuse another report coming out of those same Austin demonstrations.

Reeve scolded “the conservative Internet” for spreading a “fake” photo showing a little girl standing outside the Texas legislature holding a pro-choice picket sign that read, “If I Wanted The Government In My Womb, I Would F*** A Senator!”

Shortly thereafter, Reeve was forced to admit in a correction: “The photo is real!” She felt obligated to opine that it was “gross.”

Normally at this juncture in meme evolution, lefties would be selling “Hail Satan!” T-shirts, buttons, and bumper stickers. Lorne Michaels would be trying to get Dana Carvey on the phone. A quickie, catchy pro-choice anthem embracing the phrase and sung “We Are the World”-style by Will Ferrell’s pals would”ve been posted at Funny or Die and gone viral.

At the height of all the #HailSatan hilarity on the left side of Twitter, a single thunderclap of a Tweet shut down the party pronto:

Unfortunate to see Satan’s name used in such a diabolical manner. Another example of what “Satanism” doesn”t represent. #HailSatan”—@UKChurchofSatan

It was that utterly breathtaking inclusion of the word “diabolical” that got me thinking like a liberal: that is, that the @UKChurchofSatan Twitter account had to be fake, set up specifically to mock the proceedings, in the tradition of “Clint’s Empty Chair.”