Don’tcha Just Hate It When the Neo-Nazis Are Right? 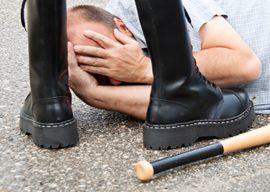 Did I ever tell you about the time I had dinner with a war criminal? It’s not exactly my funniest story, but it’s still somewhat instructive. It was September 1992. The United States was under aural assault from a multiracial triad of evil—Billy Ray Cyrus, Jon Secada, and Sir Mix-a-Lot—so I sought refuge abroad to escape the din. I’d decided to spend a few months in Europe for my second research expedition to the former Nazi concentration-camp sites. I had a busy schedule—Russia, Poland, Czechoslovakia (Yoko hadn’t broken up the band yet), Austria, and Germany.

The previous month, Holocaust denier and Hitler fanboy Ernst Zundel had won a decisive victory over his Canadian government foes; his conviction for spreading “false news,” a criminal offense in Canada at the time (no, Mr. President, we can’t enact a similar law here), had been overturned, and the law under which he was convicted had been ruled inconsistent with Canada’s Charter of Rights and Poutine. For the first time in a decade, Zundel was free as a bird, able to travel with no restrictions.

So he decided to return to Germany, the nation of his birth, to take a victory goose-step.

In the previous years, I’d been corresponding with Zundel. In those days, if you were interested in Holocaust revisionism, you had to correspond with Zundel. His well-funded and exceptionally capable defense team had amassed the world’s largest storehouse of revisionist information, much of it available nowhere else. So dealing with Zundel was unavoidable. When he heard I was going to be in Europe the same time he was, he asked if we could meet. We agreed that we’d meet on the grounds of Auschwitz, so that I could share the results of my research, in return for all the info he had previously shared with me.

After a surreal couple of days trudging through the swampy remains of Birkenau with Zundel in tow (plus my bleached-blond camerawoman and Zundel’s Waffen-SS cameraman), he asked me if I would meet up with him again when I got to Munich. Since Munich was new to me (I’d previously been only to Berlin), I agreed, as I always enjoy experiencing a city with someone who knows it well.

When I arrived in Munich two weeks later, Ernst had prepared a fine welcome for me. In a giant beer hall, which he had reserved in its entirety for the night, there were several hundred Zundel supporters, eager to meet this “Jewish revisionist” they’d heard so much about. My camerawoman and I sat at Zundel’s table, along with Zundel’s Munich “inner circle”: Ewald Althans (his armband-wearing second-in-command), about four other nameless young neo-Nazis, a Mickey Mouse-voiced French fascist named “LeLoup,” and “Major Chicago,” real name Tomislav Madi. This guy (who I’d never heard of before that night) was a real piece of work. He was the commander of a ragtag group of modern-day “SS” cosplay soldiers who were murdering and torturing Serbs during the Croatian War of Independence.

“When it comes to flooding the West with immigrants, the left has been playing the long game.”

The actual SS guy I met at Auschwitz hadn’t disturbed me one bit. He’d fought honorably on the Eastern Front, and, after receiving a massive head wound in battle, his story about having his life saved by a kindly Russian medic was the stuff of Lifetime movies. But “Chicago”? This cat gave me the creeps. He wouldn’t stop going on about killing Serbs. Man, did he love killing Serbs. After the war, he was tried and convicted as a war criminal. If you guessed that it was for killing Serbs, that’s a bingo.

I noticed that the youngsters at the table seemed to despise “Chicago.” After dinner, Althans and the other sieg heilers asked me if I wanted to come out with them to document a typical night in the life of young Munich neo-Nazis.

How could I say no? In this situation, I viewed myself as a journalist, and this was an invite that any good documentarian would accept.

What I learned was that these neo-Nazis hated “Chicago” because, to them, he represented a disease of their fathers: the “brother war.” Europeans killing Europeans. Sure, the Serbs had been enemies of the Nazi state, but that was then. Hitler’s hatreds were old news. These young radicals didn’t even have that much of a problem with Jews (at the time, there were only about 40,000 Jews in all of Germany…most of these kids had never actually met one). To these youthful nationalists, the issue that truly mattered was the increasing number of non-European refugees being granted asylum in Germany. What they were worried about was the possibility that one day Germany would be flooded with Turks, North Africans, and West Africans. This is not to say that these kids liked Jews. But what concerned them was what they could see with their own eyes in their own cities.

I brought up what I had read in the papers—that the German government shared those concerns, and that it had promised to clamp down on Germany’s generous asylum laws. At the time, German media allowed vigorous opposition to immigration to be voiced in its newspapers (Der Spiegel even allowed the use of the popular far-right term “asyl-schwindel”), and German politicians assured the public that making the asylum laws more restrictive was a top priority.

“They lie,” Althans shot back. “They say that now, because they see the public anger at just a few thousand coming in. But in time, these politicians and globalists will have us to where there’ll be hundreds of thousands coming in, and the German people will have no voice against it.”

I followed the kids for the rest of the night as they plastered the city with anti-asylum pamphlets, posters, and placards. It was harmless mischief, and I remained thoroughly dismissive of Althans’ warning. Millions of impoverished refugees pouring into Germany? The authorities promised that would never happen!

Speaking as a Jew, I can safely say that there is nothing more soul-crushing than being proven wrong by a neo-Nazi. Give me back my foreskin; I’m unworthy of the tribe.

Within the space of about twenty years, Germany went from “We promise, no flood of refugees” to “You vill accept ziss flood offf refugees, und all criticism ist verboten.” And guess what? Ewald Althans was exposed by Der Spiegel as a double agent and informer! He’d been conspiring with the authorities (and with actual neo-Nazis) to organize “Nazi”-style anti-asylum protests to create the impression that being against refugees meant being Hitler (the left tries that “Hitler” shtick everywhere, but in Germany it works really well). Zundel had never fully trusted Althans, because, as he whispered to me over dinner at the beer hall, “Dat mann ist a homozekshul, und you should never trusht a mann who chooses not to breed” (I fought back the urge to reply, “You mean, like Hitler?”). But back in Toronto, Zundel swore by his mann Freitag, Grant Bristow. Bristow, who was leading the anti-third-world immigration fight in Canada, was the real deal, Zundel assured me. Bristow was dedicated and clever, a master strategist. Through his white nationalist “Heritage Front” organization, Bristow would keep Canada white!

Except, no. Bristow turned out to be a government agent too. He was a mole planted in the far right by the Canadian Security Intelligence Service (see page 25 here). Bristow had been tasked with whipping up acts of violence and harassment in order to discredit the far right and make anyone who objected to open Canadian borders look like a potentially deadly skinhead in the eyes of the public.

That was the early ’90s. And now, it’s practically illegal to speak too forcefully against Canada’s immigration policies.

As the United States deals with issues regarding refugees and asylum, the examples of Germany and Canada teach us one very important lesson: When it comes to flooding the West with immigrants, the left has been playing the long game. Using false promises, dirty tricks, and an always-compliant media, the left has slowly, incrementally managed to get its way. In the 1990s, leading Democrat politicians assured us that border security and enforcement were top priorities. Hell, even in the 2000s, Bill and Hillary Clinton took positions that these days would get them labeled “Nazis.” The left—and by that I mean the “intellectual” left: the academics, the top politicos, the think-tankers, the funders and backers—is damn good at the long game. And honestly, it’s a game the right is ill-suited for. The right has no patience. Maybe it’s their gun culture, but right-wingers like to think they can just “kablam!” their way out of any situation. “Gimme mah gun, gimme a rope ’n’ a torch, let’s go git them traitors! Kablam! Kablam! Kablam!”

The right’s way is more honest, but the left’s is more effective. Maybe this is why Jews have always been the left’s intellectual leaders. For centuries, we couldn’t “kablam” our way out of a tight spot. We had to plot and plan; we had to learn patience. Not to revisit a recent column, but that’s why the Israeli right wing is failing. It’s trying to use brute force to “kablam” its way out of a dilemma with no long-term viable plan. That’s fundamentally un-Judaic.