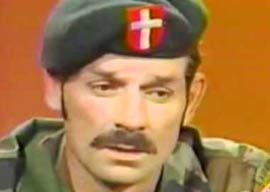 Frazier Glenn Miller, Jr. is the sort of guy you”d expect to go on a shooting rampage at two different Jewish community centers and wind up killing three Christians instead. Whether he’s a stooge, a tool, a crafty double-crosser, or simply a plain idiot, the old deranged buzzard is the sort of fella who gives white-nationalist spree killers a bad name. Whatever they”re calling “the movement” these days”maybe they still call it “the movement,” I don”t know”it is clear that people such as the man born 73 years ago as Frazier Glenn Cross are a public-relations nightmare for it.

As a former KKK Grand Dragon, founder of the White Patriot Party, and someone with alleged “ties” to The Order, you”d think the grizzled coot would have enough “extremist” bona fides to satisfy him and he could while away the rest of his days watching TV and making papier-mÃ¢chÃ© ducks, but no”Miller (allegedly) had to get drunk, go on a Jew Hunt, kill three Christians instead, and wind up making organizations such as the ADL and SPLC feel that their meddlesome existence is justified. People such as Frazier Glenn Miller are useful propaganda tools, only not in the way they may have hoped.

Barack Obama called the attack “horrific” and “heartbreaking,” while Eric Holder said it “horrified” him. Benjamin Netanyahu jammed his proboscis into the controversy and claimed the shootings were “perpetrated out of hatred for Jews.” The SPLC, but of course, dug its diamond-sharpened fangs into the story of Miller’s inept April 13 rampage, saying it only proves yet again that Internet hate sites promote hate in the hearts of gullibly hateful armed white males, using hate speech to stir an evil stew within their wicked hearts that of course makes them go on killing rampages where they slaughter Jews, blacks, gays, women, and especially Jews. (The SPLC has also launched a campaign linking Stormfront.org to “Almost 100 Hate Crime Killings” in the past five years, 77 of which were at the hands of a single Norwegian.)

But Miller was not only a target of the Nazi hunters”he soaks up hate from both sides. He is widely distrusted among hardcore white nationalists and separatists, especially given his history as an informant. He is thought by many to have been an accomplice, or perhaps even the perpetrator, of a 1987 triple murder at a gay adult bookstore in North Carolina. After his arrest on weapons charges in Missouri later that year, Miller began cooperating with feds and eventually testified against more than a dozen other alleged white supremacists in a federal sedition trial.

Despite his legal betrayals, he found a way to worm himself back into the “movement,” at least online, and allegedly became a regular commenter on VNNforum.com under the screen name “Rounder.”

I asked a friend in North Carolina”someone who’s more familiar with these scenes than I am”what he knew about Miller:

Piece of shit. Drunk. Liar. Informant….Three sons: one killed by cops, one druggy, one gay….Disappeared after Order trial and reappeared about ten years ago on Linder’s VNN. He was trying to get people to reveal names and other info. Probably had dealings with SPLC and others….Claimed to be a Green Beret, but is suspect. “¨Metzger calls him Sgt. Snitch….At one point he lived near my parents. It was during this time I believe he was trying to entrap people in schemes involving guns….No matter what media says, he wasn’t a WN or whatever. He’s been a rat for the last 30 years….He’s Mo Dees’s boy….The whole WN movement is a septic tank full of sundry retards and deviants.

A while back when I used to be on Facebook, the same North Carolina friend warned me when he noticed that a high-profile, openly belligerent neo-Nazi type”and rumored government informant”had joined my page. I promptly blocked the guy, figuring he was not worth the headache. Shortly thereafter, authorities picked him up”again“for threatening people online. I was right”not worth the headache.

Due to the radioactive nature of the forbidden lands that white nationalists traverse, the white-osphere will have its share of cranks, plants, and informants. The biggest red flag is usually when they tend to make open threats of violence toward others. Anyone who does that publicly is either dangerously dumb or dangerously smart.

Miller’s case recalls that of former radio host Hal Turner“someone who openly called for violence against government officials yet also turned out to be an FBI informant.