Drunk and Talking About Gays With a Christian 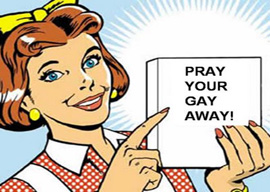 The first thing I think when I meet smart, rational Christians is, “fags.” How can anyone say being gay is something over which we have any control? The idea of a gay man being “cured” and eagerly sinking his face into a woman’s crotch is as absurd as the thought of me fellating 100 men and sort of getting into it after the 37th. As Margaret Cho once said, “Being gay is not contagious. And if you think that it is, YOU”RE GAY.”

Andy Norland is a regular Joe from Indiana whom I”ve known for years. He accepts Christ as his personal savior. Because me and my family don”t, he regretfully informs me that we”re all going to hell. He also believes homosexuality is a sin. Every time we have more than five beers, the conversation comes down to religion. The following IM exchange occurred while both of us were well past five beers.

Gavin McInnes: Are gays going to hell along with me and my family?

Andy Norland: You are, yes, but I can”t speak for all homosexuals. Do they believe in God?

Er, how can they if the Bible says their mere existence is a sin?

All right, let’s say they hate themselves for their gayness and accept Christ’s damnation.

John 3:16 is simple and it covers all the bases: “For God so loved the world that he gave his one and only son that whoever believes in him should not perish but have eternal life.” This verse causes a lot of people problems because someone like Ted Bundy, who killed 40 women but then turned Christian, would still end up in heaven.

“The idea of a gay man being “cured” and eagerly sinking his face into a woman’s crotch is as absurd as the thought of me fellating 100 men and sort of getting into it after the 37th.”

That sounds so passive and, I don”t know, “involuntary”? If you accept Christ you can do anything? What about knowingly having unprotected sex with an AIDS victim? That’s a form of suicide, no? Don”t people who commit suicide go to hell?

I actually don’t know the answer to this. There’s a ton in the Bible we don’t understand, and I think that’s good. After all, if you totally understood something like God, it’s my opinion he wouldn’t really be a God. Kind of like a PlayStation game”once you finish it, you put it away because you mastered it.

How can you think gays are not born irrevocably gay? Have you ever spoken to a homo about his childhood and how many show tunes were involved?

Wow, you just compared being gay to murder, rape, and alcoholism. Homosexuality doesn”t hurt other people. It blows them. Gays live happy and full lives when they allow themselves to be themselves. Murderers do not.

Show me the study where gays live happy and full lives. Also, people who give up gambling don’t live happier lives. They’d rather be gambling.

Don”t get me wrong, I think the Bible was a nice collection of fables from a long time ago that has done humanity a lot of good. To this day I can’t help but notice the ones helping out at the soup kitchen are not the dogmatic liberals but the boring old Christians.